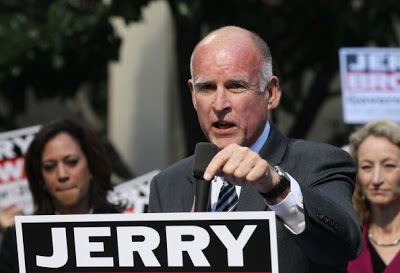 Through all the political back and forth, alternative energy has been a settled idea in California, and for that we owe a large debt to Brown. He has been ahead of the curve on energy conservation and renewable resources for decades.

LOS ANGELES — During the campaign season, it was easy to dismiss the idea of a green energy future for California as mere campaign rhetoric. But with the second coming of Jerry Brown, the reelection of Barbara Boxer, and voter endorsement of state policies to curb global warming, California really is poised to lead the country to a greener future.

Why were California voters not carried away by the Republican wave? We have certainly had our conservative hiccups in the past. There was the 1978 election when voters passed Proposition 13, which cut property taxes but also damaged school funding and caused chronic budget crises. And in 1984, California had its Arizona moment when voters passed Proposition 187, which would have terminated many public services, including schooling, for undocumented immigrants had the courts not struck it down.

But through all the political back and forth, alternative energy has been a settled idea in California, and for that we owe a large debt to Brown. He has been ahead of the curve on energy conservation and renewable resources for decades.

During Brown’s previous tenure as governor from 1975 through 1982, the nuclear industry was projecting the need for one nuclear power plant every five miles along the California coast. One of them was slated for Corral Canyon on Pacific Coast Highway near Malibu. Corporate interests also insisted on the need for a liquefied natural gas terminal at Point Conception in Santa Barbara, saying it was necessary to keep the lights from going out.

Brown turned these powerful interests down, siding instead with the no-nukes movement and the early dreamers of a solar future. Thirty years later, as a direct result of his vision, California is the most energy-efficient state in America, with an estimated 1.5 million clean-energy jobs and accumulated savings of $50 billion to $60 billion to California consumers. Two-thirds of venture-capital investments in American clean energy are in California.

American leadership on global warming has been derailed by a relentless campaign from oil companies and energy interests. “Remember Renewable Energy?” asked a New York Times editorial last week. Here in California we do remember, and the vote Tuesday reaffirmed our commitment to it.

The Obama administration still can wield regulatory power for energy conservation, and Boxer will continue to chair the Senate’s environmental policy committee. But it is Brown’s California that is poised to implement a vision of putting people to work at green jobs that will reduce air pollution and carbon emissions. Brown’s promise is to create 500,000 new green jobs in the next eight years, and we voters should hold him to — and help him realize — that pledge.

Brown faces two main challenges. The first is how to pay for a cleaner energy future. He has expressed hope that setting a requirement that one-third of the state’s energy needs come from renewable sources by 2020 will jump-start private investment.

Brown cites the example of the aerospace industry as a model. But he downplays the billions in federal investment that made that industry possible. He needs to recognize that some combination of rate hikes and tax revenues will be necessary to get the electricity-based transit revolution he envisions up and running.

The other challenge is to ensure that all Californians benefit from the state’s green energy push. Brown has succeeded in portraying his energy vision as good for the economy, but he has not explained how it will benefit the black and brown voters at the core of his support.

Put bluntly, the green future cannot be purely white. This is a great opportunity to put people to work who are now locked out of the job market. And in the end, it makes far more sense to employ at-risk youth weatherizing homes and installing solar collectors than locking them up in the largest mass incarceration system in the world.

That incarceration system could be Brown’s Achilles’ heel. If his energy policies are an example of his “paddling on the left,” his law-and-order legacy is an example of “paddling on the right.” In 1976, when then-Gov. Brown was supporting punishment rather than rehabilitation as state policy, the state prison population was slightly above 20,000. Today, the system holds 165,000 inmates and creates a massive drain on the state budget.

With Brown’s longtime support, California leads America and America leads every country in the world in incarceration rates. The state prison budget currently exceeds the combined budgets of the University of California and the California State University systems.

Brown may find that a greener future is incompatible with the state’s massive spending on incarceration at the expense of education. African Americans are 3% of UC students and Latinos are 11%. At the same time, those groups are 30% and 40%, respectively, of the state’s inmates.

While the state was building 33 new prisons in recent decades, its school funding has been stagnant. Prioritizing education and rehabilitation over prisons in state budgets could both save money and supply a steady and well-trained workforce for a green economy.

[Tom Hayden was chairman of Gov. Jerry Brown’s SolarCal Council in 1979 and a state legislator from 1982 to 2000. A founder of SDS and a leader of the Sixties New Left, Tom’s latest book is The Long Sixties.]