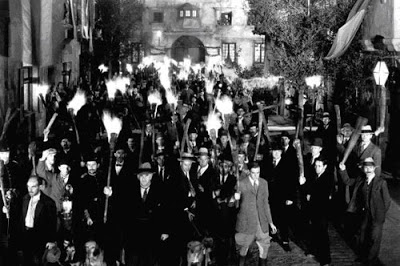 We know that conservatives are extremists for order, but why have so many liberals lost their minds and joined the frenzy over Julian Assange and WikiLeaks? As the secrets of power are unmasked, there is a growing bipartisan demand that Julian Assange must die.

Once-liberal Democrat Bob Beckel said on FOX that someone should “illegally shoot the son-of-a-bitch.” A few days ago center-liberal legal analyst Jeffrey Toobin said on CNN that Assange is “absurd, ridiculous, delusional, and well beyond our sympathy.” The Washington Times called for treating him as an “enemy combatant”; Rep. Peter King of the Homeland Security Committee wants him prosecuted as a terrorist; and of course, Sarah Palin wants him hunted down like Osama Bin Ladin or a wolf in Alaska.

This is a lynch mob moment, when the bloodlust runs over. We have this mad overreaction many times since the witch burnings and Jim Crow, including the Palmer Raids of the 1920s, the McCarthy purges of the 1950s, the Nixon-era conspiracy trials, the Watergate break- ins, and the invasions of Afghanistan and Iraq after 9/11.

Most Americans know now that those periods of frenzy and scapegoating did nothing for our security but damaged our democracy and left in their wake a secretive National Security State.

There’s wisdom in expecting calmer heads to prevail in the WikiLeaks matter, but what can be done when the calmer heads are going nuts or hiding in silence?

Do the frothing pundits remember that we have a legal system in which the accused is entitled to due process, legal representation, and the right to a defense? The first obligation of our threatened elected officials, bureaucrats and pundits is to calm down.

No one has died as a result of the WikiLeaks disclosures. But the escalation by the prosecutors in this case could lead to an escalation, with more sensitive documents being released in a retaliatory spiral of this first cyber-war. Imprisoning the messenger will amplify his message and further threats of execution.

I can understand the reasonable questions that reasonable people have about this case. It is clearly illegal to release and distribute the 15,652 documents stamped as “secret.” Why should underground whistleblowers have the unlimited right to release those documents? There is a risk that some individuals might be harmed by the release? There is a concern that ordinary diplomatic business might be interrupted.

All fair questions. These concerns have to be weighed against two considerations, it seems to me. First, how important is the content of the documents? And how serious is the secrecy system in preventing our right to know more about the policies — especially wars — being carried out in our name? And finally, is there a reasonable alternative to letting the secrets mount, such as pursuing the “transparency” agenda, which the White House purports to support?

Let me weigh these questions with regard to the wars in Iraq, Afghanistan, Pakistan, Yemen, and the “Long War” scenario that has occupied my full attention these past nine years.

It will be remembered that the Iraq War was based on fabricated evidence by U.S. and British intelligence services, the Bush-Cheney White House, and even The New York Times through the deceptive reporting of Judith Miller. The leading television media invited top military officials to provide the nightly narrative of the war lest their be any doubts in the mesmerized audience.

Secrecy and false narratives were crucial to the invasions, special operations, renditions, tortures, and mass detentions that plunged us into the quagmires where we now are stranded. The secret-keepers were incompetent to protect our national security, even when cables warned of an immanent attack by hijacked airliners.

The secrecy grew like a cancer on democracy. Earlier this year, the Washington Post reported in “Top-Secret America” that there were 854,000 people with top- security clearances. [William Arkin, Dana Priest, “Top Secret America,” Washington Post, July 19, 2010] That was the tip of the iceberg. The number of new secrets rose 75% between 1996 and 2009, to 183, 224; the number of documents using those secrets has exploded from 5.6 million in 1996 to 54.6 million last year. [Time, December 13, 2010] The secrecy cult appears uncontrollable: the Clinton executive order 12958 [1995] gave only 20 officials the power to stamp documents top-secret, but those 20 could delegate the power to 1,336 others, while a “derivative” procedure extended the power to 3 million more officials and contractors. [Time, December 13, 2010]

The 1917 U.S. espionage statute requires that Assange received secret documents and willfully, with bad faith, intended to harm the United States by releasing “national defense information.” That’s a tough standard. Perhaps in order to close what U.S. Attorney General Eric Holder describes as “gaps in our laws,” the State Department sent a letter demanding that Assange cease the releases, return all classified documents and destroy any records on WikiLeaks databases. [Washington Post, November 30, 2010]

These are difficult legal hurdles for the Justice Department under the First Amendment, but, according to a source close to the defense with experience in such cases, it seems clear that the U.S. government will prosecute Assange with every tool at their disposal, perhaps even rendition.

“What President Obama needs is a photo of Assange in chains brought into a federal court,” the source said.

[U.K. prosecutors seeking to overturn a ruling granting bail to Assange will have their appeal heard by a London judge tomorrow, December 16.]

Should there be an attempt to extradite Assange, he has the right to appeal to the European Court of Human Rights.

Assange has a very strong base of support in London where public anger over the fabrications that led to war still runs high. An extradition fight in London could carry on for weeks, providing an important platform for the defense. Or the UK government could take the risk of an accelerated emergency deportation process to send him to Stockholm, or even the U.S. in the most extreme scenario.

If Assange winds up in Stockholm, it could take several weeks to fight his way through a bizarre and complicated sexual harassment trial. Anything is possible there, from all charges being dropped, to the finding of a technical infraction, to jail time. Or Sweden could make an emergency finding to extradite him straight to the U.S., risking an adverse public reaction for serving as to a handmaiden of the Pentagon.

In the atmosphere of hysteria ahead, it is important for peace and justice advocates to remember and share what Americans owe to Julian Assange and WikiLeaks.

The secretive wars exposed by WikiLeaks will cost $159.3 billion in the coming fiscal year, and several trillion dollars since 2001. The American death toll in Afghanistan will reach 500 this year, or 50 per month, for a total of 1,423, and 9,583 wounded overall — over half of the wounded during this year alone. The Iraq War has left 4,430 U.S. soldiers dead and 32,000 wounded as of today. The civilian casualties are ignored, but range in the hundreds of thousands of Iraqis, Afghans, and Pakistanis.

Is it possible that Julian Assange is the scapegoat for arrogant American officials who would rather point the fingers of blame than see the blood on their own hands? What else can explain their frenzy to see Assange dead?

The trial of Julian Assange is becoming a trial of secrecy itself. Wherever the line is drawn, secrecy has become the mask of power, and without new rules, the revolt of the hackers will continue.

[Tom Hayden is a former California state senator and leader of Sixties peace, justice, and environmental movements. He currently teaches at Pitzer College in Los Angeles. His latest book is The Long Sixties. This article was also published at The Nation and Progressive America Rising.]

3 Responses to Tom Hayden : Julian Assange and the Lynch-Mob Moment