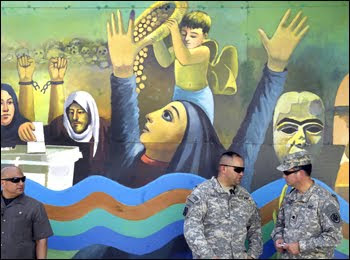 Image from Progressive America Rising.
Pressure from the ‘longer warriors’:
Obama to cave on Iraq withdrawal?

Was it too good to be true? In February at Camp Lejeune, our new President Barack Obama surprised all observers by pledging to withdraw all U.S. troops from Iraq by 2012, in accord with a pact secretly negotiated at the end of the Bush era. Previously, Obama was promising to withdraw all combat troops, leaving a “residual force” dominating Iraq for years.

Obama has restated his commitment to the full withdrawal on several occasions. But heavy pressure is building to make the president drop his commitment.

The most ominous sign of the gathering campaign to make Obama cave in came in a February 24 op-ed piece in the New York Times by Thomas Ricks, the pre-eminent mainstream historian of the war. Given the political gridlock and growing turbulence in Iraq, Ricks says that breaking his campaign promise is the “best course” for Obama to pursue.

Ricks says “it would be best to let [read: pressure] Iraqi leaders to make the first public move to re-open the status of forces agreement” under which U.S. combat troops will soon be departing.

“As a longtime critic of the American invasion of Iraq, I am not happy about advocating a continued military presence there,” Ricks writes. Perhaps he is forgetting his 2009 book celebrating Gen. David Petraeus, The Gamble, in which Ricks predicted that Obama would have to break his vow to remove all combat troops to avoid “abandoning Iraq.” Or his prediction in the same book that the U.S. is only “halfway through” the Iraq War.

Ricks’ epilogue was titled “The Long War,” making him one of the earliest warrior-journalists to embrace the notion of a 50-80 year war projected by top counterinsurgency advisers to Petraeus and the Pentagon.

Everyone including Ricks agrees that the American public is completely soured on the Iraq War. Just this week a federal agency noted that the $53 billion spent on Iraq reconstruction, the largest aid effort since the Marshall Plan, has been squandered. [NYT, Feb. 22, 2010]

No matter that both Iraq and Afghanistan are trillion-dollar wars and, according to the latest federal budget analysis, there is “virtually no room for domestic initiatives for Mr. Obama or his successors.” The neo-conservative stealth strategy of destroying government programs by “strangling the baby in the bathtub” (the phrase of Grover Norquist) is working.

The reason U.S. military combat may continue in Iraq is that the Pentagon has not won the war. On the one hand, the U.S. has installed a brutal authoritarian Shiite-dominated coalition in power in Baghdad, one closely aligned with the Pentagon’s strategic enemies in Iran. That’s not a victory. That same Shiite coalition has used its power to purge the minority Sunni candidates from running in the elections scheduled for next month. Gen. Ray Odierno recently stated the obvious, that the key Iraqi politicians purging the Sunni candidates “clearly are influenced by Iran.” [NYT, Feb. 17, 2010]

Not surprisingly, the top Iraqi blocking Sunni participation, according to Gen. Odiorno, is the same Ahmed Chalabi who conspired with the neocons to pass along false information leading to the 2003 invasion.

These events may drive the Sunni community to revive its insurgency, which was contained by U.S. funding of the “Awakening” movement and promises of protection. The return of insurgency would mean civil war. The alternative may be more likely, a demand from the Sunnis that their former enemies, the Americans, stay in Iraq to protect them from the Shiites. This scenario would be in accord with the doctrine advocated by Petraeus advisor Stephen Biddle [see Foreign Affairs, March-April 2006]. Divide and conquer may succeed.

What are the chances Obama will keep to his commitment? At this point, the most likely withdrawal we can expect from the President is not from Iraq but from his previous commitment. How can he politically succeed in withdrawing against warnings from all sides that chaos and bloodshed will be the result? The Long War advocates have him where they want him.

The peace movement may protest, and public opinion may be unenthusiastic, but cannot be counted on to stop this Long War plan for Iraq if Obama caves. Last month there were only five American deaths in Iraq; for 2009, the count was 149 [compared to 822 in 2006].

If renewed American intervention cannot be stopped, neither can a reckoning down the road, however. The cost of occupation is more than a fiscal one. A permanent American occupation of Iraq will be like a giant breeder reactor generating deadly and unpredictable opposition from Iraqi nationalism and Islamic fundamentalism for years to come.

3 Responses to Tom Hayden : Obama to Cave on Iraq Withdrawal?