Tom Hayden : Paul Ryan, Dan Senor, and the Return of the Neocons 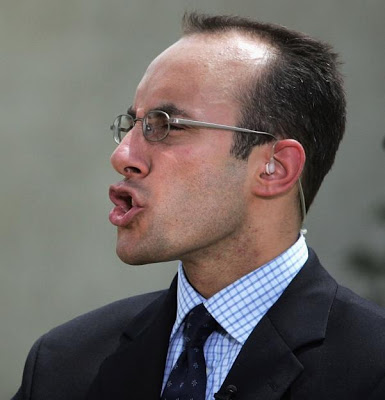 Dan Senor, who supplied Republicans with spin in furtherance of the wars in Iraq, Afghanistan, and hawkish pro-Israeli forces, is the chief spokesman for a neocon circle advising Romney.

The neoconservatives have consolidated their plan for control of U.S. foreign policy with the vice-presidential nomination of Paul Ryan.

Ryan is being briefed by Dan Senor, described mildly in The New York Times as “an expert on Israel and the Middle East.” Senor, however, is anything but expert. He was the spokesperson, or spin doctor, for the initial Coalition Provisional Authority, which occupied Iraq in 2003 with promises about democracy blooming after weapons of mass destruction were removed.

Not since Vietnam had state propaganda so completely dominated the narrative, in keeping with the Pentagon/neocon view that “the liberal media” caused the fall of Saigon.

Ever since, Senor, often with “fat briefing books under his arm,” has supplied Republicans with spin in furtherance of the wars in Iraq, Afghanistan, and hawkish pro-Israeli forces represented by Sheldon Adelson. It was Senor who traveled with Romney to London, Israel, and Poland on his recent foreign policy tour, and it was Senor who told the traveling media that Romney would support an Israeli strike on Iran.

Senor has achieved more respectability than Bush or Dick Cheney in Washington power circles, apparently by indefatigably showing up with briefing books, by his marriage to former CNN anchor Campbell Brown, his ties to wealthy hedge-fund investors, and political connections across the Beltway.

He is the chief spokesman for a neocon circle advising Romney, one including more controversial hardliners such as Bush’s UN ambassador John Bolton. Senor’s sister, Wendy Singer, is the AIPAC representative in Israel.

Ryan’s famous budget-slashing plan for the U.S., approved twice in the House of Representatives, does not include a nickel reduction in the Pentagon budget. And while Ryan has given little-reported foreign policy speeches extolling “American exceptionalism” to the applause of neoconservatives, he has carved his reputation as a deficit-fighter on domestic budgetary issues.

Since foreign policy is likely to be a marginal issue in the campaign, a Romney-Ryan victory would mean a smooth pathway to restoration for the neocons who dominated the Bush foreign policy. Their core constituencies of fundamentalist Christians and Jews would benefit despite lack of majority support for their militarist agendas. If they go to war, it will be without a public mandate. Adding Ryan to the ticket will appeal to the constituency of Ron Paul libertarians while masking their big government militarism.

The Obama Democrats would be on solid ground arguing that Romney-Ryan represent a return to the Bush era not only on economic issues but on foreign policy as well. A Democratic attack on “the same people that caused the Great Recession” could be supplemented by a parallel warning against “the same people who fabricated our way into Iraq.” But it remains to be seen whether Obama-Biden or their Democratic surrogates will attack the neocon resurgence on any such grounds.

It is not in the Republican campaign’s interest to strongly highlight foreign policy differences with Obama. By their historic nature, the neoconservatives are elitists who tend to infiltrate foreign policy infrastructures, a pattern that began when they were followers of the venerable Trotskyist Max Shachtman as long ago as the 1930s.

They evolved to become pro-Israel Democrats in the 1960s when they migrated into the Republican Party in response to the New Left and civil rights movements. There they made a home for themselves as fierce anti-Communists and pro-Zionists despite the blunt anti-Semitism of Richard Nixon and the Fundamentalist Christian script for the Second Coming in which the Jews either convert or disappear.

They played an instrumental role in the Central American wars before their direct engagement in the Iraq War and the Bush presidency.

Their primary target today is regime change in Iran. Their primary allies are Netanyahu and Adelson. The strategy requires occasional saber rattling and Obama-bashing, but primarily waged off camera and with discretion.

Just as the Romney-Ryan campaign is a Trojan horse for the Tea Party, it also provides protective cover for the return of the neocons. Fighting Obama on deficit reductions is fine with the neocons as long as they win — and war budgets are off the table.

[Tom Hayden is a former California state senator and leader of Sixties peace, justice, and environmental movements. He currently teaches at Pitzer College in Los Angeles. His latest book is The Long Sixties. This article was also published at Tom Hayden’s Peace Exchange Bulletin. Read more of Tom Hayden’s writing on The Rag Blog.]