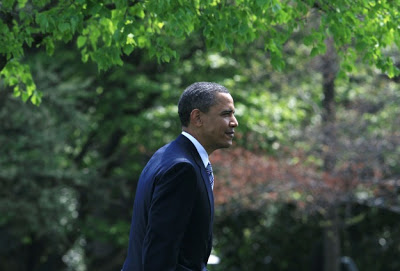 Obama landscape: seeing the forest for the trees? Photo by Mark Wilson / Getty Images.
Returning to a grass roots agenda:
A response to Bill Fletcher
on Obama, 2012, and rethinking ‘Hope’

I agree with Bill Fletcher’s essay on how to approach Obama in 2012. I only wish to add these thoughts.

First, I knew very well that Obama was a centrist, because he declared himself to be at the midpoint between Senator Henry “Scoop” Jackson and “Tom Hayden Democrats” such as myself. I knew where things stood from the get-go. No matter how reasonably I described my beliefs, Obama would keep moving to the right of them in order to maintain his role as a centrist.

Aside from the frustrations this would mean for progressives like myself, it also meant that Obama was defining “center” in an unfortunate way. He apparently didn’t mean a midpoint between the 75 percent majorities and 25 percent minorities on taxing the rich, saving Medicare and Social Security, and getting out of Afghanistan. He meant staying in the middle between the poles he chose to consider relevant, which meant the far right and the middle, leaving the Democratic Party liberals stranded on many issues.

But now Obama has stranded himself, with a majority of Americans favoring “another candidate” in 2012, and a fall-off of about 30 percent among all Democrats and Latinos. His strategy obviously is to get Democrats and Independents to hold their noses and vote for him against an obnoxious Republican in 2012.

This, folks might do. I certainly will. On the other hand, Obama will have an impossible time mobilizing the same level of resources, organizers, and energy of his grass-roots campaign of 2008. So he could lose in some of the dozen states where he won by 1-3 points in that historic year.

I attended an Obama rally in Culver City, California, the other night. There were 2,500 people gathered at Sony Studios, in the district of progressive Congresswoman Karen Bass. The crowd was loyal, caring, supportive, but not inflamed as they were in 2008. The speeches, which were supposed to galvanize, were somewhat flat. People had the president’s back, but all were well aware that the road ahead would be hard and uphill.

I certainly don’t think that the President should throw red meat to his base if it harms him among the independents. But I think he should be aware that his careful parsing of words and positions leaves many people lacking their previous level of faith.

To be specific, does he really mean that he will let the tax credits for the rich expire in 2012, no matter the outcome of the election and negotiations with Republicans? Or is he open to an extension? No one knows, because Obama loathes absolutes.

On Iraq, will he really withdraw the remaining 50,000 troops, or is he open to a deal extending the occupation? On Afghanistan, does he plan a significant withdrawal beginning this July, or will American combat troops remain through 2014? Again, no one can be confident that they know.

On immigration rights, does Obama really have a plan to implement a “path to citizenship,” or does he mean to make this a wedge issue with Republicans? Did he do all that he could for the Dream Act students? Or is he just trying to bring back the Latino vote in New Mexico, Colorado, and Nevada?

On Wall Street reform, will Obama really protect us against the return of the vulture capitalists? On campaign contributions, does he really intend to reverse the Supreme Court over Citizens United, or will he focus on raising 1 billion dollars for his re-election? On green jobs, does he seriously believe we can accept coal mining, deep water drilling, and more nuclear plants as part of the bargain?

Serious questions all. By keeping his base uncertain, Obama lowers our commitment to a point where we are going through a shared uncertainty about each other. If he seems to hedge his bets, so do many of us.

Back in 2008, we thought there might be a progressive upsurge that would keep Obama accountable to our agenda. It was a provisional experiment.

As things turned out, however, the big constituencies of the Democratic Party [like labor] have failed to come up with effective strategies to turn the economy around and end the wars. Perhaps the most interesting success of progressives, in my mind, was that of the brainy and well-financed LGBT network, which maintained the pressure to repeal “Don’t Ask, Don’t Tell.” It was a remarkable victory, but even so the legislation contained loopholes actually allowing the military to stall. 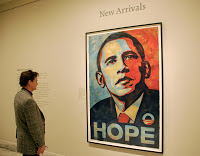 In 2012, like most of us, I will campaign and vote for Obama, not because he is the Second Coming, but because the alternative is unimaginable, and his administration is staffed with all sorts of intelligent and creative people who are open to progressive pressure and thought.

In fact, I will take pleasure in trying to engage the American public in a debate about Tom Payne versus Ayn Rand, Keynes versus Milton Friedman. I think we are at a historic turning point in our culture when so many white people are incapable of accepting the election of a black president. For these extremist “birthers,” Obama is symbolic of the Illegal Aliens undermining traditional white culture. They pose a serious internal threat; even the Homeland Security Agency warned in 2009 of the rise of right-wing violence due to the election of a black president and an economic recession.

Like Bill Fletcher, I hope we can return to the grass-roots agenda of trying to shift public opinion and building state and local power bases capable of creating blue-state models of social change and competing with the corporations to push Obama towards applying his experience of community organizing to making the presidency a progressive bastion.

Most on the American Left have internalized the idea that only social movements can make a president progressive, citing the examples of abolitionist pressure on Abraham Lincoln and workers’ pressure on Franklin Roosevelt. That’s a huge step towards understanding how history works from the bottom up.

But the plain fact is that the American Left, unlike our counterparts in Latin America and Europe, has been unable to build an infrastructure of parties, unions, media, and artists capable of the daily work of organizing to compete politically while fostering counter-communities of lasting meaning.

The reason that education, health care and social services are more affordable, that green politics is more viable, that labor protections are stronger on other continents is that there are stronger social-democratic, radical, and green parties with popular support in those parts of the world. They resisted the impulse to empire and war, and tried to develop and improve their lives at home.

There is little Obama can do about that. He plays with the cards he is dealt. He is both the commander-in-chief of a global network of power, and a leader elected on promises of deep reform. He cannot be both.

Obama is the symbol of the new globalization processes unleashed in the world, still under excessive influence of those banking elites who Lula refers to as “white people with blue-eyes.” Perhaps the American Left needs to study the political experience of social movements in countries where, when forced to leave their empires behind, a better quality of life was discovered, waiting all along.

[Tom Hayden is a former California state senator and leader of Sixties peace, justice, and environmental movements. He currently teaches at Pitzer College in Los Angeles. His latest book is The Long Sixties. This article was also published at TomHayden.com. Read more of Tom Hayden’s writing on The Rag Blog.]