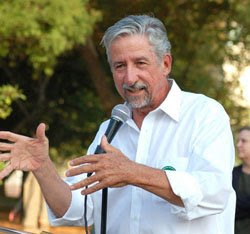 ‘The similarities between the movements for RFK and Barack Obama (the fervor and the interracial character) have been often noted. If anything, the Obama constituency is larger because of the mobilization of so many more young people’
By Tom Hayden / August 15, 2008

As the Democratic National Convention approaches, people inevitably think about the parallels between 1968 and 2008.

The times are different. True, there were unpopular wars raging in those days, but the American casualties in Vietnam were 15 times more than in Iraq today. Every young man faced the draft. Those under the age of 21, like the college students for Eugene McCarthy, could not vote.

The demonstrations of the ’60s finally opened the institutional channels that were closed to my generation of protesters.

Today, anti-war sentiment is occasionally expressed in the streets: There have been 11 protests over the war in Iraq with more than 100,000 participants — but it is diffused less visibly across the mainstream.

It is difficult to call for law and order or speak for a “silent majority” (as Richard Nixon did) against 55 percent of American voters who favor a one-year withdrawal, and impossible to indict the likes of Michael Moore, the Dixie Chicks or Cindy Sheehan.

If anyone should be indicted for urging riots at the Democratic National Convention, it would be Rush Limbaugh, who in April told listeners that he was “dreaming” of riots at the DNC. (U.S. Sen. Ken Salazar called Limbaugh’s comments “incendiary.”)

In 1968, the Democratic establishment was carrying out and defending the Vietnam War against rebellions in the ghettos, on campuses, and among its own rank and file. The Democratic delegate-selection system was rigged from within.

In that situation there arose a movement of African-Americans, Mexican-Americans and a “conscience” constituency on campuses around the candidacy of Robert Kennedy — who, shortly after Martin Luther King’s assassination, was murdered at a moment when our history was beginning to turn around.

The similarities between the movements for RFK and Barack Obama (the fervor and the interracial character) have been often noted. If anything, the Obama constituency is larger because of the mobilization of so many more young people.

In both instances, the movements were more progressive on issues than the candidates themselves. Kennedy campaigned on a general anti-war pledge without proposing complete withdrawal. But onlookers had to be clueless not to know that Kennedy intended to end that war. The tide of anti-war feeling that first made Obama a viable candidate and now holds him to a timetable for withdrawal will continue to rise if he becomes bogged down in future quagmires.

Since the death of Robert Kennedy, I have never been inspired by an electoral movement like that for Obama. There are no certainties, however. He may not win because of the Electoral College’s twisted logic, ironically rooted in our founding compromise over slavery. Many of my generation are haunted by the knowledge that there are killers out there in the shadowlands, making us admire Obama’s audacity all the more.

If Obama does win, experience suggests that his victory might stimulate a new social movement like the one connected to another Kennedy in the early ’60s, which was based on rising expectations after the dreary years of suspicious elections, fabricated wars, environmental denial, spreading inequality, Gilded Age corruption and Katrina-type disasters.

John F. Kennedy was at first cautious in the face of that movement. He disastrously invaded Cuba and sent Green Berets to Vietnam. He resisted the 1963 March on Washington but then embraced it fully. After the Cuban fiasco, he began to rethink the Cold War worldview and move along a path of domestic reform. Then came his murder, followed by the worst years of the ’60s, which his brother Robert, in one brief moment, tried to reverse.

Our global generation revolted against the constrictions of the Cold War on all sides. We lived with the terror of atomic weapons, being told as children to crawl under our school desks and that our world might be incinerated over the Cuban missile crisis. We opposed a two-dimensional world, which made every country a satellite and every individual a dependent on two nation-states competing with the indescribable threat of nuclear weapons. The more the nuclear arms race grew, the more proxy wars were fought, the more the possibilities of dissent and democracy seemed to shrink.

It is forgotten that our generation knew terrorism, too. We struggled not only for human rights and peace in Vietnam, but for the end of the Cold War-approach of mutually assured nuclear destruction.

The long-term challenge for the Obama generation is not only to end the present wars and deal with new crises like global warming, but also to challenge the framework of the war on terror and the shadow it casts over the future.

A President Obama may have to go through a Bay of Pigs in Pakistan or Afghanistan before he begins, like the Kennedy brothers, to reconsider the assumptions of the war on terror. But the parallels are identical.

During the Cold War, the enemy threat was defined as a conspiracy in Moscow, carried out through hidden guerrilla armies across the world. Vietnam was only a pawn of Moscow and, it was added, perhaps China. To combat this menace, trillions of dollars were spent on the nuclear arsenal, conventional armed forces and secret operations from Iran to Guatemala. Expenditures on anti-poverty programs simply dried up, because it wasn’t possible to afford both guns and butter. Anyone who protested the Vietnam War in the streets was considered by Lyndon Johnson, Richard Nixon and J. Edgar Hoover to be an instrument of this internationally based conspiracy.

The recent conflict between Russia and Georgia reveals that the Cold War is not entirely over. A faction of neoconservatives, along with John McCain, have supported sending U.S. advisers and funds to support the fledgling state of Georgia in its efforts to dominate several breakaway areas on the Russian border. This policy of supporting Georgia’s designs on South Ossetia, and promoting Georgia in an expanded NATO alliance, has been shaped by McCain and his foreign policy adviser Randy Scheunemann, a lobbyist who has been on the payroll of Georgia for several years, according to a Washington Post story last week.

Scheunemann previously led the “Iraq lobby” as head of the Committee for the Liberation of Iraq, and as a director of the Project for a New American Century. McCain and Scheunemann now are reviving a Cold War with Russia while at the same time pursuing multiple fronts in the war on terror. Their hardline ideological commitment, combined with lucrative lobbying contracts, fuels a dangerous and costly thrust toward a war until the last Communists and Islamic militants surrender.

If Vietnam was the focal point of the Cold War, Iraq and now Afghanistan are focal points in the new war on terror. The conspiratorial center, we are told, is an al-Qaeda headquartered in places like North and South Waziristan. Its agents are secretly feeding money and weapons to insurgents loyal to a global jihad. They must be annihilated by military force, at whatever expense to domestic programs and civil liberties. Our country will be devastated by nuclear suitcase bombs unless we crush al-Qaeda in its cave.

This is the same crackpot realism that passed for common sense in the ’60s. It overemphasizes organizational targets while underestimating the forces of nationalism and religious hatred ignited by the nature of our policies toward Muslim countries. When we bomb wedding parties in Afghanistan, we give birth to hundreds of raging new jihadists. When we fail to act on the knowledge that Afghanistan is the 122nd-poorest country on the United Nations’ development index of 127 nations, we set in motion the possible attacks on our country that we claim to fear.

If the Obama generation does not find a way to avoid this treadmill to death, there will never be more than token resources for economic development in our inner cities or a new green economy, to cite two urgent domestic priorities. Our young men and women will die in ambiguous quagmires. Most of the world will be hostile to our plight. If the only change is that a black man will be running our empire, is that change worth fighting for?

Obama himself cannot make this larger change. It will be difficult enough to withdraw from Iraq and eventually reach compromise on Afghanistan and Pakistan. As commander in chief and the person in charge of our superpower reputation, he will feel compelled toward military action even if his visionary instincts have to be set aside. It will take the movement, which is stirring now, to lead him in the direction of his dreams, as the movements of the ’60s helped bring forth the greatness in the Kennedys.

Tom Hayden, a founder of Students for a Democratic Society (sds) in the sixties, is a retired California state senator, author, and political and social activist. His latest book, with Ron Sossi and Frank Condon, is “Voices of the Chicago Eight: A Generation on Trial” (City Lights, July 2008).