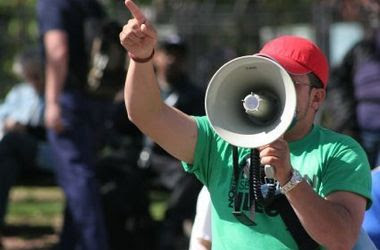 Students at the State University of New York protest tuition hikes, November, 2009. Photo from Albany Times Union
We can’t afford to be quiet
About the rising cost of college

“There are some things we feel, feelings that our prevailing, acquisitive, and competitive corporate life, including tragically the universities, is not the way of life for us…”

That heartfelt plea for university reform, issued in 1969, is striking because it was voiced by Hillary Rodham, a student at Wellesley College. Are there any lessons or comparisons to be drawn from those turbulent times for the students and faculty members who are today demonstrating against the rising cost of higher education? As a student at the University of Michigan at Ann Arbor in those days and an itinerant sociologist at Scripps College now, I believe we can look to the past as legacy but not as blueprint.

The current generation of young people deserves admiration for the contributions they already have made: creating hip-hop culture, winning sweatshop-free purchasing agreements, leading online advocacy groups like MoveOn.org, and for being the backbone of Barack Obama’s unprecedented volunteer campaign. They will be the cradle of social activism for the next 20 years.

But the challenges they face on their campuses are far different from those of my generation, and perhaps more profound. Tuition at Michigan in 1960 cost less than $150 per semester. So I could obtain my degree, edit the student newspaper, go south to work in the civil-rights movement for two years, return and enter graduate school, and never feel that I was falling behind in the competitive economic rat race that young Hillary spoke out against.

Students today, however — even those who hold two part-time jobs — fall tens of thousands of dollars into debt, a burden that limits their career choices. Dropping out for social activism brings competitive disadvantage. The speedup of academic pressures dries up discretionary time that used to go to dreaming and exploring. Campuses are crowded with scrambling multitaskers for the most part too busy to protest the pace. Meanwhile, increases in the cost of college exceed inflation every year, intensifying the squeeze.

We had different grievances. The curriculum was often irrelevant to the social crisis we perceived ourselves inheriting; it needed reform. Students were powerless under the paternal doctrine of in loco parentis; we wanted rights. Students were disenfranchised, even though men could be drafted; we needed the vote and alternatives to the draft.

Structurally excluded, we went to the streets, to the outside, demanding change on the inside. It’s an exaggeration, but only after strikes, rioting, and taking over buildings did colleges offer the mainstream menu of women’s studies; black, Latino and Asian studies; queer studies; and environmental programs that they do today.

Now most students read Howard Zinn in history classes; back then Zinn was fired from Spelman College for marching with the Student Nonviolent Coordinating Committee.

In those days, university administrators were personified by the impersonal managerial elites depicted by C. Wright Mills, our sociologist hero. In recent decades, the multiversity has been succeeded by a privatized hybrid institution enmeshed in Wall Street machinations, a development epitomized by the former Harvard University president Lawrence H. Summers. Excessive financial risk-taking has resulted in depleted portfolios everywhere. 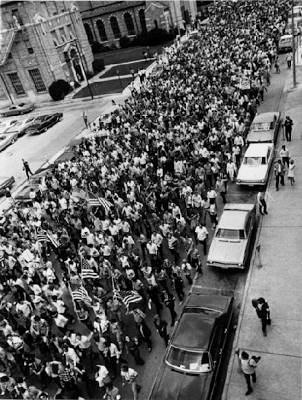 UT students lead a massive march against the War in Vietnam, May 8, 1970, in Austin. Photo from University of Texas / Houston Chronicle.
No longer independent, higher education has succumbed to the political pressures of regents and trustees who all too often are tied to banks and corporations. For an example of this inbred conservatism, consider a recent survey that showed the public favoring the use of federal stimulus money to keep tuition down, even if that meant leaving less money for operations. In response, a spokesman for the American Council on Education said, “The public is not always right.”

The recent outbreak of protests on hundreds of campuses is a promising sign that economic populism will be a central dynamic in any student movement of the future. Since many of the most active protesters today are students of color, there is greater potential for a coalition that includes inner-city taxpaying communities than there was when so many of the militants were from affluent suburbs.

Making college less affordable just as a large number of qualified aspirants are emerging from disadvantaged minority communities is an explosive issue. The numbers of women in college are larger than in the past, which might also widen the coalition.

The value of the past lies in remembering how recently higher education was affordable, even cheap. It’s not inevitable that a college education today costs so much. Undergraduate education is virtually free at the Sorbonne or the National Autonomous University of Mexico, and a year at Oxford costs no more than community colleges charge here.

The choices we have made as a country — to relentlessly privatize our public institutions; to eventually spend three trillion dollars, by some estimates, on the war in Iraq instead of on our public universities; to bail out billionaires on Wall Street while hitting students and their families with repeated tuition increases — are choices with consequences that we have to rethink or accept.

As recently as 1982, when I entered the California State Assembly, my first battle as a naïve new legislator was against fee increases at community colleges, which then were proudly free and accessible.

Under President Ronald Reagan and Gov. George Deukmejian, the (Republican) lobbyists for the colleges supported first-time fee increases to avoid budget cuts. Their motivation was not merely budgetary but also a matter of ideological principle. Nothing, they said, should be free in life, which meant that investment in public colleges and universities should be replaced by a consumer-marketplace approach.

Most of the Democrats went along when they were promised that the fees would be temporary. When the recession of that period ended, those fees became permanent, and they have escalated ever since. A similar pattern has been true of tuition increases at California State University and the University of California.

Were I still in politics, I would run for office on a promise to keep the magical possibilities of higher education affordable for today’s American families, and for the next generation seeking new opportunities for their children.

I wonder why the silence from politicians is so deafening. Is it that colleges and universities are easier targets at budget time than corporate-tax loopholes are? Is it that students and faculty members are marginal players in the great game of campaign contributions? Or that college constituencies are too fragmented, divided, and transitory to unify as an effective force for change?

The recent discontent on campuses is a healthy challenge to America’s priorities. I hope that Hillary Clinton hears an echo of herself before she and her colleagues become the politicians she warned us against.

[Tom Hayden is a visiting professor of sociology at Scripps College, in Claremont, Calif. His most recent book is The Long Sixties: From 1960 to Barack Obama (Paradigm, 2009).]