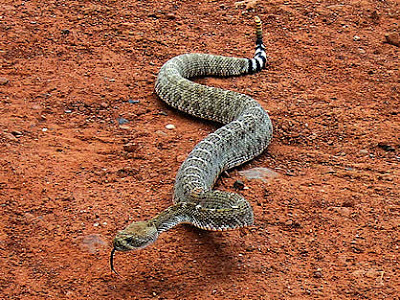 Welcoming Arizona rattlesnake: “Cowboys amble” — and, well, “snakes slither.”
Moving West, writing East:
The life of a writer in the Southwest
of the 1960s and ’70s

This took place in the late 1960s, when the anti-war movement and its cultural twin were both flowering. There’s that window of opportunity we all have in our early 20s when there’s nothing — love, family, job, mortgage, school — to batten us down.

“Arizona,” someone suggested with a nod and a wink. “Arizona.” I knew nothing about the youngest of the lower 48, except that Barry Goldwater and marijuana both came from there, and I thought that any place where those two elements are both at play is worth investigating. I jumped through that window of opportunity and landed in Tucson.

A squat two-bedroom adobe in a working-class neighborhood full of similar houses rented for $150 monthly. A friend and I took the place. My bedroom window looked out on a couple of lonely saguaro, and every morning, I awoke to a Western B-movie set.

An active anti-war movement was in place, and I found a freelancer oasis — a fertile town with no one else writing for the underground press or sea-level magazines such as Crawdaddy!, Fusion or 2-year old Rolling Stone. I could take part in affairs that mattered and write about Southwestern mythology at the same time.

For Crawdaddy! I wrote about the real Rosa’s Cantina in El Paso and the copper-smelter workers who sipped away their afternoons at its bar. For Fusion, about the acid cowboys of northern New Mexico. And the bi-weekly Rolling Stone? They put me on retainer, sending me $50 an issue simply to be on call and give them first dibs on story ideas. I arranged for a hipster country band to play for imprisoned draft resisters at a minimum-security federal prison, then wrote it up for the Stone. Like that.

The people, the issues, the land, the air, the music and, yes, the language. All these ingredients constructed my new West. I grabbed a picket sign to march for farm workers in front of Safeway. I joined another demonstration against a university’s Mormon beliefs of racial inequality. (That was at a college basketball game. Boy, were we popular.)

Late one night, I ran with a secretive group called the Eco-Raiders and wrote up their efforts to combat urban sprawl. The war against Vietnam was a constant reminder of global issues, while the desert Southwest taught me the fragility and permanence of the land.

I had not just moved to the American West. I had moved to a region with an odd-angled line running through it — the international boundary. The north of Sonora and Chihuahua had much in common with New Mexico and “dry-faced Arizona,” as Jack Kerouac called it. Mexico, too, became part of my faculty, and I, one of its pupils.

I spent time in Bisbee, Silver City, Cananea, Walsenburg (Colorado, but who’s counting), El Paso-Juárez, Morenci, Cd. Chihuahua, Douglas-Agua Prieta — many of these towns with huge mining and smelting operations. They were more than just colorful destinations on the map.

I cannot explain why I am attracted to mining camps and their stories. Traveling through the towns where copper, zinc, and coal rise to the surface and get processed, I’ve found a genuine kinship with miners and their families. Certainly it cannot be envy: I have no desire to descend hundreds of feet underground and extract ore or calibrate explosives in a shaft, nor do I want to drive mammoth yellow equipment pitched on tires three times the size of a pickup truck. It cannot be common background, either — the mining communities and I have no shared past.

Still, time and again, I have been invited into miners’ homes and felt privileged to listen to family histories and collective memories, to hear cherished songs explained and to read unpublished letters. It’s been an honor — one-sided, as far as I can determine — and I’ve benefited by it enormously.

Back in the late 1970s, the 2,000-mile U.S.-Mexico border was a warm and inviting place (and still is, to a certain extent, though no one believes me anymore). I traveled that Third Country sandwiched between two large powers, listening to fronterizos and writing down my impressions. Only one other writer was traveling the frontier at the time, a fellow from The New York Times who invited me to contribute to his newspaper. And so I wrote about the American West for people back East — very part-time, nothing more than a stringer, but in a region full of life and rough edges.

They asked me to report conventional stories such as court cases, regional angles on national trends, and curious university research, but what assignment editors valued most was stories pitched from the field — all the more so, I discovered, if they evoked the Old West with dirt roads, dusty boots, and barbed wire.

Their notion of the Southwest was matched by my compulsive attempts to fulfill it, and soon, in deference to my editors, I put a sign over my typewriter: REMEMBER: COWBOYS AMBLE, BUSINESSMEN STRIDE, MARIACHIS STROLL.

One day, I learned about a Yaqui judge who helped a Jewish retirees’ club unearth the old Hebrew graveyard at Tombstone’s Boothill Graveyard. The rededication ceremony was to take place later that week. This Old West story linked Jews, cowboys and Indians — a threefer! I breathlessly called the National Desk. Instead of the usual follow-up questions, I was immediately green-lighted with an open-ended word count and a photographer.

Interpreting the Southwest for the East, I tried to give an accurate picture, though my credibility only went so far. To file a story, we’d type or handwrite our copy, then read it over long distance to the recording room in the bowels of the old Times building on West 43rd Street. A battery of transcribers would monitor our calls as we dictated our stories into their machines.

We e-nun-ci-a-ted each word, especially names, which we’d spell out, and always spoke dis-tinc-t-ly, even giving punctuation commands. The transcribers would call back if they had any questions, period, paragraph.

In one story from the frontier’s smallest border town, Antelope Wells, N.M. (population: 2), I wrote about the annual cattle crossing that attracted cowboys, livestock brokers, Department of Agriculture inspectors, ranchers and customs officials from both countries.

On my way to file from the nearest pay phone five miles away, I colored the story, describing the strong chuckwagon coffee served to gathering vaqueros at daybreak by “a few Mexican cooks.” The next day, I was chagrined to read in the Times that the event attracted “a few Mexican crooks.”

I liked interpreting the West for the East, and in chit-chat with an editor one warm day, he asked about the racket in the background. “Oh, that’s the swamp cooler,” I replied, as matter-of-factly as if I had said it was my dog barking. “The what?” I explained that a swamp cooler worked on the principle of a cool damp towel tossed over the metal grill of an electric fan. This led to a major conference among editors, all of whom were intrigued with this exotic contraption — should they assign a piece on the poor man’s air conditioner? (They did, but not until much later, and then to another contributor.)

One story I wrote included the word campesinos. A copy editor called back, insisting that I blend a translation into the article. I blanketed my exasperation and asked if he would agree that campesino is one of those foreign words that has been absorbed into contemporary English. The line went silent for a moment. “I’ll tell you what,” he finally said. “I’ll learn Spanish if they’ll learn Yiddish.”

One morning, the phone rang at 7 o’clock, usually a warning that someone on the East Coast didn’t understand time zones. It was an editor at Esquire who, after describing a story he wanted pursued in Texas, asked if I would, and I believe these were his exact words, “mosey on over to Houston.” I informed him that if we both started moseying at the same time, he’d likely mosey into Houston before me.

The rhythm of the Southwest, its natural continuity and occasional brute force — I suppose that’s what keeps me here. I tried to move away. Twice: once to the San Francisco Bay area, and another time to Austin, Texas. Neither venture lasted more than six months. Both times, I maintained my post office box in Tucson. I knew.

Thornton Wilder lived in Southern Arizona at various stages of his life, once in Tucson in the mid-1930s, just weeks after Our Town had opened on Broadway. One early summer day, he was asked how he liked his temporary home. “I like it very much,” he answered, then tempered his reply. “There are three disadvantages, two of which would be curable. I miss a great library to browse in. I miss great music. And I came at the wrong time of year.”

The library problem and lack of great music have both been cured, but not Wilder’s third disadvantage. In more than four decades of living here, from my first arrival one August, I’ve never grown accustomed to the unrelenting heat of the summer, never liked it, and annually grumble that this summer will be the last one I spend here.

The sun bores a hole through your skull until it singes the synapses in your brain and renders you powerless and stupid. Like Thornton Wilder, I came at the wrong time of the year.

The rest of the year, I need the desert. Not all the time, please, but inhaling a good whiff of it now and then keeps the lungs satisfied and reminds me that I’m not too far from the dread unknown. I need the border for its anarchic sense of reality. I need Bisbee, population 6,800, for the stumbling satisfaction it conveys. I’d like a good river and more green, but then it wouldn’t be the desert Southwest.

[Tom Miller’s 10 books include Trading With the Enemy: A Yankee Travels Through Castro’s Cuba, and The Panama Hat Trail. He has previously written for The Rag Blog about Phil Ochs, Don Quixote, and Jerry Rubin. Read more articles by Tom Miller on The Rag Blog.]