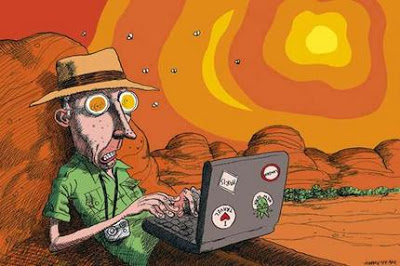 Be skeptical of writers who talk of snow-capped peaks, bustling marketplaces where the beadwork is always intricate, and shy but friendly natives.

Great travel writing consists of equal parts curiosity, vulnerability, and vocabulary. It is not a terrain for know-it-alls or the indecisive. The best of the genre can simply be an elegant natural history essay, a nicely writ sports piece, or a well-turned profile of a bar band and its music.

A well-grounded sense of place is the challenge for the writer. We observe, we calculate, we inquire, we look for a link between what we already know and what we’re about to learn. The finest travel writing describes what’s going on when nobody’s looking.

Moritz Thomsen (1915-1991) was one of the great American expatriate writers of the twentieth century. Period. A soft-hearted cuss, a man of almost insufferable integrity, a lousy farmer and a terrific writer, his books have long since been smothered by the avalanche from megapublishers (yet remarkably, three of his titles remain in print).

Although all his works could be considered travel memoirs imbued with a sense of place, his third book, The Saddest Pleasure, embodies some of the very finest elements of the genre: constant doubt, a meddlesome nature, and a disregard for nationalism. (The book’s title comes from a line in Paul Theroux’s novel, Picture Palace: “Travel is the saddest of the pleasures.”)

Thomsen, who stayed in Ecuador following his mid-nineteen-sixties Peace Corps stint, pledged allegiance to nothing except his station as an expatriate. And as an expat he was free to judge us all, an undertaking he finessed with acute observations, self-deprecation, and a flavorful frame of reference that ranged from a Tchaikovsky symphony to a Sealy Posturepedic mattress.

Inquisitiveness. Yes. In The Art of Travel, a book worth staying home for, Alain de Botton quotes Alexander von Humboldt’s childhood curiosity: “Why don’t the same things grow everywhere?” And as children we might also ask, “Why doesn’t everyone look the same?” “Why don’t we all speak the same language?” Or, to quote Rodney King’s adult exasperation, “Can’t we all just get along?”

It is these pure and simple questions of innocence that should accompany travel writers, not iPads cell phones, or laptops. Travel with paper and pen, a book, maybe a bilingual dictionary. Ask the questions a child might.

In the late nineteen-seventies I advanced a notion that the U.S.-Mexico frontier was really a third country, 2,000 miles long and 20 miles wide, and went about testing it. I had little awareness of travel writing, but when my book about the borderland came out in 1981, reviews invariably referred to it as travel literature, a category I had never really considered.

Reviewers anointed me a travel writer; I didn’t choose the label. Others have recoiled at the identity. “I detest the term,” Jonathan Raban told the Chicago Tribune. Eddy L. Harris insisted to the same newspaper: “I’m not a travel writer. Absolutely not.” Although I’ve openly embraced it, the name sometimes makes me uncomfortable, too. It’s as if travel writing were considered a second-tier calling — “non-fiction lite.”

Yet surely as buses plunge off Peruvian mountainsides and Norwegian freighters collide with Liberian tankers, the basic ingredients of formula travel writing will endure. Henry Miller succumbed. When he lived in Paris, Miller wrote the odd travel piece for a friend’s publication. “They were easy to do, because I had only to consult the back issues and revamp the old articles,” he wrote in Tropic of Cancer. “The principal thing was to keep the adjectives well-furbished.”

(You’d shy away, too, if foreigners constantly accosted you, cameras, notepads, and tape recorders at the ready.) The essayist who calls a town quaint, the plaza charming, or the streets teeming, has no literary imagination. Distrust any writing that opens with a quote from a cabbie or closes with one from a bartender.

My favorite travel accounts all have an unspoken subtext. They are full of polemic, prejudice, adversity; revelation, conquest, triumph. “Somebody must trespass on the taboos of modern nationalism,” wrote Robert Byron in The Road to Oxiana, defending travelers whose writings insult their hosts. “Business can’t. Diplomacy won’t. It has to be people like us.”

The finest travel writing gets under the skin of a locale to sense its rhythm, to probe its contours, to divine a genuine understanding. We shed pre-, mal-, and misconceptions about a land, then sneak up on it and develop our own prejudices.

It’s difficult to parachute into a setting for just a few days and emerge with confident, intelligent writing. I am often envious and always bewildered by writers such as Joan Didion who spent two weeks in El Salvador and emerged with a most respectable book about that country at war, or Andrei Codrescu who did a fly-by over Cuba and crash-landed with Ay, Cuba!

Travel literature usually consists of writers from industrial countries visiting far less developed lands. (For a memorable variation to this regrettable state of affairs, read An African In Greenland, by Tête-Michel Kpomassie from the 1980s; or, from a century earlier, read the Cuban José Martí’s essays on life in the States.)

Not surprisingly, there is little tradition of homegrown travel literature in Namibia, Belize, or the Ukraine. Many countries publish anthologies of outsiders looking in at them, curious visitors who never quite unpacked their bags. In Notes of a Villager, the Mexican author José Rubén Romero laments, “Our country is like a cow fallen off a cliff, rich in spoils for the crows of other nationalities.”

As unrepentant crows from other nationalities, travel writers have enthusiastically picked at the rich spoils the world has lain bare. And we always go back, all of us, because somewhere in the world another cow is always falling off another cliff.

[Tom Miller is the author of Revenge of the Saguaro: Offbeat Travels Through America’s Southwest and many other books about Cuba, the borderlands, and Latin America. Tom can be seen live onstage along with gonzo writer and blogger Joe Bageant at the San Miguel Literary Sala, Posada San Francisco, San Miguel de Allende, Mexico (across from the main plaza), at 5 p.m., November 11, 2010.]