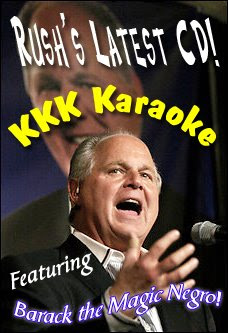 ‘Chip Saltsman, pretender to the chairmanship of the Republican National Committee thought it would be funny to send a CD with 41 tasteless, demeaning racial parodies to his Republican buddies as a holiday gift.’

The GOP just can’t seem to shed its divisive and racially insensitive mantle of privileged intolerance and hate. Many Republicans still herd all black and hispanic people into the back entrances of their minds, and find raucous, race-bating, put-down musical parodies good for an attitude affirming chuckle. “Why no harm intended!”

Chip Saltsman, pretender to the chairmanship of the Republican National Committee who thought it would be funny to send a CD with 41 tasteless, demeaning racial parodies to his Republican buddies as a holiday gift makes my point. The tasteless gaffe caused an uproar. Saltsman still thinks the songs, produced for the ever sensitive, Rush Limbaugh, are “light hearted” and “good humor.”

What good old Chip has done here is to prove what my departed yellow dog Democrat Irish-stock father always enjoyed pointing out about South Texas politics, “The jackasses always stick out a head higher from everybody else.” His observation works across party lines and on the national level as well.

In the quiet confines of the private whites-only clubs and well-tithed all white Protestant churches many still do not see what all the uproar over the “clever little songs” is all about. It is dismissed as so much more thin-skinned political screaming from “those liberals.” Even one of the two African-American candidates for the chairmanship of the GOP National Committee, J. Kenneth Blackwell, reportedly called the disgust with the Republican’s “Barack the Magic Negro” racial ditty, mere “hypersensitivity.” A token dismissal?

Just to be sure they don’t regain any of the flood of Latino votes that went to the Democrats, the happy holiday hum-along CD also contained a tasteless treatment of Hispanics set to the music of our national anthem titled, “The Starspanglish Banner.”

While high profile Republicans like current party chairman, Mike Duncan, former GOP house speaker, Newt Gingrich, and many more in the GOP leadership have been quick to distance themselves from, and denounce Chip Saltsman’s musical miscue, I have to wonder how many of the other candidates for the GOP party chairmanship, who were, or were not, on the gift list for the now-toxic CD will issue statements categorically denouncing Saltsman and his lack of musical taste.