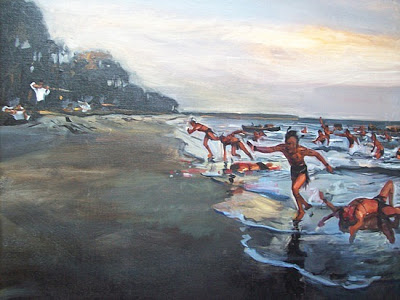 California’s public history mostly erases its tragic past, turning profound injustices, such as the genocide of native peoples, into a narrative of Progress.

“The future always looks good in the golden land, because no one remembers the past.” — Joan Didion

BERKELEY, California — A couple of weeks ago I attended the 3rd Global Conference on Genocide in San Francisco. The conference, organized by the International Network of Genocide Scholars, covered genocides, past and present, in many parts of the world. Just about everywhere, except here. In three days of panels and presentations, I could find only one discussion of California as a site of genocide, and it was in my paper.

California can hold its own with other regions of the world regarding human-made tragedies — genocide, pogroms, ethnic cleansing, lynching, racial segregation, eugenics, imprisonment without trial, and torture. We know this from the accounts of witnesses and survivors, and from richly descriptive social histories written during the last 30 years.

Yet, California’s public history mostly erases its tragic past, turning profound injustices, such as the genocide of native peoples, into a narrative of Progress. The upbeat version of The California Story as a place of entrepreneurial ingenuity and cutting-edge modernity has served as a cultural firewall, numbing and cutting us off from the state’s bloody history.

It is rare to find in our textbooks, classrooms, and public places a reckoning with our nineteenth century catastrophe: dispossession and massacres of native communities; break up of native families, including a commercial trade in women and children; organized efforts to erase thousands of years of cultural experience; and systematic looting of native graves and artifacts to the benefit of collectors, museums, and universities.

It is even more rare to find accounts of local native resistance, from guerilla warfare during the Gold Rush to battles over land and repatriation in the twentieth century. Crude and racist representations of acquiescent native peoples dominated public space in California for over a century, making it easier to frame their near extermination in the imagery of natural history, subject to inevitable processes of erosion and decline, rather than as a result of human intervention — a genocide.

Eugenic legacies persist today in the state’s 4th grade curriculum that transforms the colonial, racist imperatives of the Spanish mission system into a romantic origins story of uplift and civilization. And in the 7th grade, when The Diary of Anne Frank is typically taught, it is the rare teacher who makes a connection to California’s catastrophe.

There are so few public acknowledgements of California’s history of atrocities against native peoples that I can list them here:

California does not have any monumental, officially endorsed, civic memorials to victims of mass injustice, such as the Memorial to the Murdered Jews of Europe in Berlin, the Shoah Memorial in Paris, Memory Park in Buenos Aires, or the African Burial Ground National Monument in New York. Nor do we have any educational and cultural institutions devoted to learning about the motivation, psychology, and organization of perpetrators, such as the Topography of Terror in Berlin or Nazi Documentation Center in Nuremberg.

There is nothing in California comparable to the federal memorial on Bainbridge Island, Washington, that commemorates how the first town under Roosevelt’s 1942 order removed all citizens of Japanese origins; or to Reconciliation Park in Tacoma, an ongoing private-public initiative to remember how the port city ethnically cleansed hundreds of Chinese in 1885.

Due to lack of public funding, California also has a weak public arts presence in memorial culture. By contrast, Berlin’s artistic projects are so embedded in daily life that you literally bump into reminders of Nazism at the top of subway exits, or walk past them on the way to work, or see them next to ads in neighborhoods, or stumble over them on the way into a café. For example, hovering in the shadows of the gigantic Memorial to the Murdered Jews of Europe in a nearby park is a kiosk that seductively invites you to look through a peephole at two men or two women kissing, and to imagine their fate under the Nazis.

I understand the political importance of creating large-scale monuments in publicly visible sites, but personally I appreciate memorials that catch you off guard, make you figure out something for yourself, and are part of the everyday landscape. Smaller is not necessarily better than bigger, but often has a wider impact and may last longer.

Coming to terms with this region’s long record of social injustices is necessary in order to chip away at chauvinist notions of the United States as destined by providence and militarism to lead the world, and of the mythic Golden State as a model of multiculturalism. Addressing our history in all its contradictions helps us to guard against hubris and to recognize our modest place in an interdependent world.

We’ll know we’re making progress when we teach the Mission system as part of colonial history, when the genocide of native peoples in the northwest is taught alongside The Diary of Anne Frank, and when a genocide conference held in San Francisco pays serious attention to the region’s sorrowful past.