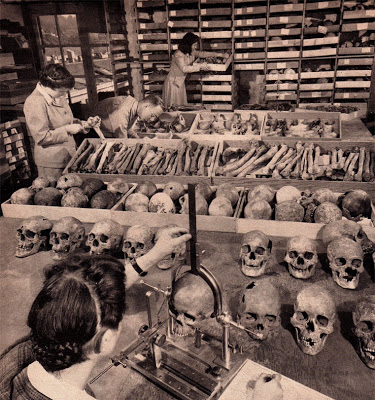 A graduate student at an anthropology museum at Berkeley uses a craniometer to measure an ancient Indian skull. This collection alone contained more than 10,000 Indian skeletons. Photo from Life magazine, October 25, 1948. Image from The Buffalo Post.
Death’s double standard:
Justice for the living dead

It’s not only the unauthorized digging up of ancestors that haunts the memory of native peoples, it’s also the blatant double standard that adds indignity to insult.

It’s good news that the United Nations has authorized University of Arizona professor James Anaya, Special Rapporteur on the Rights of Indigenous Peoples, to carry out its first investigation into the status of Native Americans in the United States, with a particular focus on American compliance with standards embodied in the UN Declaration on the Rights of Indigenous Peoples, to which the U.S. became a signatory in 2010.

The focus of Anaya’s scrutiny no doubt will be on today’s inequalities and injustices that deeply impact 2.7 million Native Americans throughout the country. But let’s not forget the inequities of death.

Despite popular images of tribal members getting rich from gaming pay-offs, the overwhelming majority of Native Americans remain mired in poverty, the victims of structural unemployment and racial exclusion, compounded by devastating rates of diabetes, suicide, infant mortality, and cardiovascular and alcohol-related diseases.

There is a long way to go before, in the words of the Declaration, “indigenous peoples are equal to all other peoples” entitled to the right to “self-determination” and to “be free from discrimination of any kind.”

Inequality is a problem for the dead as well as the living. According to Article 12 of the UN Declaration, native peoples have a right to “the use and control of their ceremonial objects, and the repatriation of their human remains.” Repatriation as a central demand of Native American movements in the United States speaks to the long history of plunder of native artifacts and bodies.

Over a period of some two hundred years, from Thomas Jefferson’s exploration of a Native American barrow near his home in Virginia, to passage of the federal Native American Graves Protection and Repatriation Act (NAGPRA) in 1990, several hundred thousand native grave sites — maybe as many as one million — were dug up in the name of science, recreation, and commerce.

There was a brisk trade in native body parts and funerary artifacts, propelled by the popularity of commercial and recreational “collecting,” scientific curiosity, and the heritage industry. The artifacts removed from graves ended up in private collections and public display cases around the world, including the Smithsonian, Royal Museum of Ethnology in Berlin, the British Museum in London, and museums in Prague, Zurich, Vienna, and Moscow.

During the 19th and early 20th centuries, scientists in universities and museums engaged in a frenzy of acquisition in the hope that native bodies would shed light on the origins of the species or on racial typologies of human difference. They were particularly interested in the bodies of Indians, who, it was believed, had been frozen in time since the Stone Age, and whose remains therefore were thought to hold the key to “secrets of human origins,” as well as provide physical evidence for claims about European superiority and native degeneracy.

This science made it easier to frame the near extermination of native peoples in the imagery of natural rather than social history, subject to inevitable processes of erosion and decline, rather than as the result of human intervention and — in the case of California — genocide.

In widely read treatises — such as Samuel Morton’s Crania America (1839), Ales Hrdlicka’s Directions for Collecting Information and Specimens for Physical Anthropology (1904), and Edward Gifford’s Californian Anthropometry (1926) — the measurement of brain cavities, nostrils, and degree of slope in foreheads generated all kinds of scientific quackery to justify the civilizational superiority of white Europeans and innate inferiority of native peoples.

Aside from the racist assumptions that guided research on native bodies, the science was also flawed because documentation of provenience of bones and artifacts found in graves was often nonexistent. Moreover, scientists harvested far more corpses than they could ever study. Tens of thousands of native dead were stashed in boxes, cellars, and personal collections, only to be resurrected for display in cabinets of curiosities, museums, schools, and international expositions.

A skull collected on Santa Rosa Island was included in the U.S. exhibition at the Columbian Historical Exposition in Madrid in 1892. In the 1920s and 1930s, a self-styled amateur archaeologist dug up hundreds of dead Tongva Indians and used their bones to decorate his Catalina Museum of Island Indians. To this day, the Favell Museum in Klamath Falls, Oregon, proudly displays native artifacts looted from graves.

With passage of the Native American Graves Protection and Repatriation Act in 1990, the practice of widespread grave looting was officially stopped. Moreover, NAGPRA requires federally funded institutions to publish their holdings of native body parts, as well as artifacts taken from graves, and to facilitate their return to tribes that are able to make a case for genealogical or cultural connection.

NAGPRA was as significant a piece of legislation for Native Americans as the Civil Rights Act was for African Americans. And, similarly, it represents an unfinished revolution. The pace of repatriating human remains is glacially slow: by 2009, less than five percent nationwide had been returned to tribes. By 2010, the University of California at Berkeley had repatriated only 179 of its 10,000 native body parts.

There is nothing inherently wrong with using the dead to reconstruct the past. With the help of new developments in chemistry, DNA analysis and dating methods, we can learn a great deal from human remains about how our ancestors lived, worked, and died. Respectful collaboration between community groups, advocacy organizations, politicians, and scientists in New York in the 1990s, for example, made it possible to excavate what had been the Negros Buriel Ground, resulting in a detailed portrait of the daily lives of Africans in colonial New Amsterdam in the seventeenth and eighteenth centuries.

A similar collaboration between the Muwekma Ohlone Tribe, archaeologists, and Pacific Gas and Electric Company — following the inadvertent exposure of native burials in Santa Clara, California, in 2008 — produced a great deal of information about the lives and deaths of Ohlone neophytes buried in the mission at the end of the 18th and beginning of the 19th centuries.

For most twentieth century archaeology, however, the decision to excavate and exhume native remains was typically made unilaterally and imposed by fiat. The problem is not with the search for knowledge, but rather the unequal relations of power between investigator and subject, collector and collected; the lack of consultation and permission, the arrogance run wild; and how the products of knowledge are misused.

It’s not only the unauthorized digging up of ancestors that haunts the memory of native peoples, it’s also the blatant double standard that adds indignity to insult. Remembrance and treatment of the dead is a highly selective political project. Some of our collective dead are respected, others humiliated. Consider some examples:

Federal policies of repatriation are a step in the right direction. But most native remains are unclaimed or unknown. What should be a national ritual of remembrance and mourning has become a technical, bureaucratic process. In addition to tribal claims for the return of their dead, there is also a need for public commemoration that speaks to a national tragedy.

Throughout much of the 20th century, while the government built memorials to the victims of world wars and now, as it continues to make efforts to account for every person missing from the Vietnam War, hundreds of thousands of native bones and skulls have been stored anonymously in basements and boxes, and their burial goods displayed as mementos of a “vanishing race” or as freak show curiosities.

However much we have tried to assiduously forget this sorrowful history, the past continues to reverberate in the here and now. It is time to do justice to our living dead.

5 Responses to Tony Platt : Justice for the Living Dead