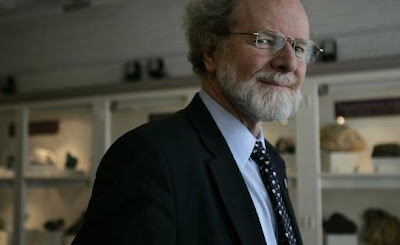 Climate scientist James McCarthy, a leader of the group that shared the Nobel Peace Prize with Al Gore, calls Bush on carpet for giving high level civil service jobs to political appointees. Photo by Suzanne Kreiter / Boston Globe.
McCarthy: ‘It’s ludicrous to have people who do not have a scientific background, who are not trained and skilled in the ways of science, make decisions that involve resources, that involve facilities in the scientific infrastructure.’
By Juliet Eilperin and Carol D. Leonnig / November 22, 2008

The president of the nation’s largest general science organization yesterday sharply criticized recent cases of Bush administration political appointees gaining permanent federal jobs with responsibility for making or administering scientific policies, saying the result would be “to leave wreckage behind.”

“It’s ludicrous to have people who do not have a scientific background, who are not trained and skilled in the ways of science, make decisions that involve resources, that involve facilities in the scientific infrastructure,” said James McCarthy, a Harvard University oceanographer who is president of the American Association for the Advancement of Science. “You’d just like to think people have more respect for the institution of government than to leave wreckage behind with these appointments.”

His comments came as several new examples surfaced of political appointees gaining coveted, high-level civil service positions as the administration winds down. The White House has said repeatedly that all gained their new posts in an open, competitive process, but congressional Democrats and others questioned why political appointees had won out over qualified federal career employees.

In one recent example, Todd Harding — a 30-year-old political appointee at the Energy Department — applied for and won a post this month at the National Oceanic and Atmospheric Administration. There, he told colleagues in a Nov. 12 e-mail, he will work on “space-based science using satellites for geostationary and meteorological data.” Harding earned a bachelor’s degree in government from Kentucky’s Centre College, where he also chaired the Kentucky Federation of College Republicans.

Also this month, Erik Akers, the congressional relations chief for the Drug Enforcement Administration, gained a permanent post at the agency after being denied a lower-level career appointment late last year.

And in mid-July, Jeffrey T. Salmon, who has a doctorate in world politics and was a speechwriter for Vice President Cheney when he served as defense secretary, had been selected as deputy director for resource management in the Energy Department’s Office of Science. In that position, he oversees decisions on its grants and budget.

Their recent career moves, along with those of several other Bush appointees, highlight the extent to which personnel who started their federal careers as presidential picks are making the transition into civil service. That practice, known as “burrowing” by career government workers, has been a regular occurrence in the waning days of previous administrations, as well.

White House spokesman Tony Fratto said the administration was not involved in orchestrating any hires of political appointees, and he defended the right of political aides to apply for career positions.

“The White House has no policy on individuals applying for career jobs,” he said. “There is no deliberate effort to shift political staff into career jobs.”

At least one agency yesterday initially referred questions about the personnel moves to the White House, but Fratto said that was because the agency was wary of the media.

“We expect agencies to follow the rules as laid out” by the Office of Personnel Management, he said. “If there is an instance where those rules are not followed, OPM has the obligation and the responsibility to follow up with the career officials at those departments and agencies and take corrective measures.”

But Senate Environment and Public Works Committee Chairman Barbara Boxer (D-Calif.), raised concerns about the shifts in an interview yesterday.

“I believe it’s unethical to do this. Clearly the people voted for change,” Boxer said. She said she had discussed the issue with members of President-elect Barack Obama’s transition team, adding: “They are on top of it.”

“In hiring our Nation’s Federal career workforce, the Administration adheres to a rigorous, transparent and competitive process in place at each agency that is managed by career officials and safeguarded by the merit system principles upheld by the Office of Personnel Management (OPM), without White House involvement,” Reyes wrote.

McCarthy at the AAAS specifically questioned Salmon’s and Harding’s qualifications, but DOE spokeswoman Healy Baumgardner said Salmon’s duties include “operational administration and management,” which are “not science-based.” Baumgardner added that Salmon competed for the high-level Senior Executive Service post against “a number of other applicants.”

At NOAA, spokesman Anson Franklin said Harding was selected in “a competitive process by career executives” and “the position did not require a scientific background, but a background in international relations.”

Akers, a former GOP Capitol Hill staffer who did not make the list for the three best-qualified candidates when he initially applied for a GS-15 job at the DEA, got a second chance last month when the agency advertised it was taking applications for two weeks for a soon-to-be-vacant job in the Senior Executive Service.

Acting DEA chief Michele Leonhart announced on Nov. 13 that she had chosen Akers for the career position to help oversee a division called Demand Reduction, a headquarters job that the agency had previously told budget analysts it planned to eliminate.

A source familiar with the situation said the Justice Department raised concerns about the initial plan to hire Akers without opening the position for full competition. A Justice Department spokesman declined to elaborate but said the agency instructed the DEA to make the process fair and open.

Akers’s career path within the DEA over the past three years has yielded considerable financial benefits. For nine years before joining the DEA, he worked for Sen. Charles E. Grassley (R-Iowa) and as the director of the Senate Caucus on International Narcotics Control, where in 2005, his last year on the Hill, he made $39,000, legislative records show.