Torture? Bet You Can’t Prove It! 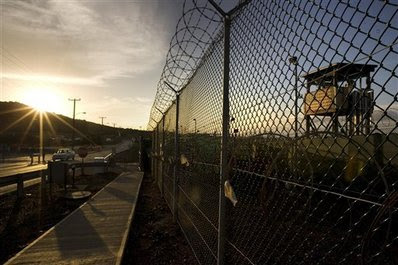 In this image reviewed by the U.S. Military, the sun rises over Camp Delta detention compound which has housed foreign prisoners since 2002, at Guantanamo Bay U.S. Naval Base, in Cuba, Friday, June 6, 2008. Photo by Brennan Linsley.
Pentagon Told Guantanamo Interrogators To Trash Evidence
By Michael Melia / June 8, 2008

The lawyer for Toronto-born Omar Khadr, Lt. Cmdr. William Kuebler, said the instructions were included in an operations manual shown to him by prosecutors and suggest the U.S. deliberately thwarted evidence that could help terror suspects defend themselves at trial.

Kuebler said the apparent destruction of evidence prevents him from challenging the reliability of any alleged confessions. He said he will use the document to seek a dismissal of charges against Khadr.

The “standard operating procedures” manual that contained the purported instructions was made available to Kuebler last week as part of a pretrial review of potential evidence, the Navy lawyer said.

“The mission has legal and political issues that may lead to interrogators being called to testify, keeping the number of documents with interrogation information to a minimum can minimize certain legal issues,” the document is quoted as saying in an affidavit signed by Kuebler.

The document could support challenges by other detainees to suppress confessions at Guantanamo, where the U.S. military says it plans to prosecute as many as 80 of roughly 270 detainees before the first U.S. war-crimes tribunals since World War II.

The case against Khadr, who was captured in Afghanistan when he was 15, is on track to be one of the first to trial. He faces war-crimes charges including murder for allegedly throwing a grenade that killed a U.S. Special Forces soldier during a 2002 firefight.

Kuebler said the nature of the interrogations is particularly relevant in Khadr’s case because prosecutors are relying on evidence “extracted” from him at Bagram air base in Afghanistan and at Guantanamo.

“If handwritten notes were destroyed in accordance with the SOP, the government intentionally deprived Omar’s lawyers of key evidence with which to challenge the reliability of his statements,” Kuebler said in an e-mail to reporters.

The operations manual, which dates to January 2003, was attached to a 2005 report on an investigation into detainee abuse allegations at Guantanamo, Kuebler said. A summary of the findings was released at the time, but the defense lawyer said the section including the manual has not been made available publicly.

The so-called Schmidt-Furlow report documented degrading treatment, including one instance of a top terror suspect forced to dance with another man and behave like a dog. But investigators stopped short of saying torture occurred.