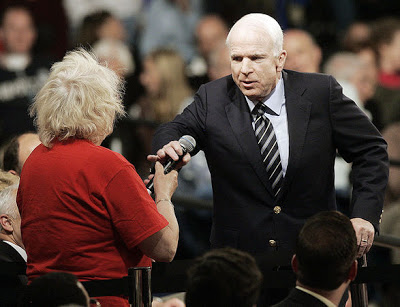 Even got too hot for John: McCain takes the microphone from a woman at a rally Friday in Lakeville, Minn., after she said: “I don’t trust Obama. … He’s an Arab.” Photo by Jime Mone / AP.

This should be read by everybody, IMHO. The social dynamics of fascism and its origin in economic crisis, from Polanyi’s important book, are outlined below.

‘The rage bubbling up from our impoverished and disenfranchised working class, glimpsed at John McCain rallies, presages a looming and dangerous right-wing backlash.’
By Chris Hedges / October 13, 2008

It is no longer our economy but our democracy that is in peril. It was the economic meltdown of Yugoslavia that gave us Slobodan Milosevic. It was the collapse of the Weimar Republic that vomited up Adolf Hitler. And it was the breakdown in czarist Russia that opened the door for Vladimir Lenin and the Bolsheviks. Financial collapses lead to political extremism.

As the public begins to grasp the depth of the betrayal and abuse by our ruling class, as the Democratic and Republican parties are exposed as craven tools of our corporate state, as savings accounts, college funds and retirement plans become worthless, as unemployment skyrockets and as home values go up in smoke we must prepare for the political resurgence of a reinvigorated radical Christian right. The engine of this mass movement—as is true for all radical movements—is personal and economic despair. And despair, in an age of increasing shortages, poverty and hopelessness, will be one of our few surplus commodities.

Karl Polanyi in his book “The Great Transformation,” written in 1944, laid out the devastating consequences—the depressions, wars and totalitarianism—that grow out of a so-called self-regulated free market. He grasped that “fascism, like socialism, was rooted in a market society that refused to function.” He warned that a financial system always devolved, without heavy government control, into a Mafia capitalism—and a Mafia political system—which is a good description of the American government under George W. Bush. Polanyi wrote that a self-regulating market, the kind bequeathed to us since Ronald Reagan, turned human beings and the natural environment into commodities, a situation that ensures the destruction of both society and the natural environment. He decried the free market’s belief that nature and human beings are objects whose worth is determined by the market. He reminded us that a society that no longer recognizes that nature and human life have a sacred dimension, an intrinsic worth beyond monetary value, ultimately commits collective suicide. Such societies cannibalize themselves until they die. Speculative excesses and growing inequality, he wrote, always destroy the foundation for a continued prosperity.

We face an environmental meltdown as well as an economic meltdown. This would not have surprised Polanyi, who fled fascist Europe in 1933 and eventually taught at Columbia University. Russia’s northern coastline has begun producing huge qualities of toxic methane gas. Scientists with the International Siberian Shelf Study 2008 describe what they saw along the coastline recently as “methane chimneys” reaching from the sea floor to the ocean’s surface. Methane, locked in the permafrost of Arctic landmasses, is being released at an alarming rate as average Arctic temperatures rise. Methane is a greenhouse gas 25 times more powerful than carbon dioxide. The release of millions of tons of it will dramatically accelerate the rate of global warming.

Those who run our corporate state have fought environmental regulation as tenaciously as they have fought financial regulation. They are responsible, as Polanyi predicted, for our personal impoverishment and the impoverishment of our ecosystem. We remain addicted, courtesy of the oil, gas and automobile industries and a corporate- controlled government, to fossil fuels. Species are vanishing. Fish stocks are depleted. The great human migration from coastlines and deserts has begun. And as temperatures continue to rise, huge parts of the globe will become uninhabitable. The continued release of large quantities of methane, some scientists have warned, could actually asphyxiate the human species.

The corporate con artists and criminals who have hijacked our state and rigged our financial system still speak to us in the obscure and incomprehensible language coined by specialists at elite business schools. They use terms like securitization, deleveraging, structured investment vehicles and credit default swaps. The reality, once you throw out their obnoxious jargon, is not hard to grasp. Banks lent too much money to people and financial institutions that could not pay it back. These banks are now going broke. The government is frantically giving taxpayer dollars to banks so they can be solvent and again lend money. It is not working. Bank lending remains frozen. There are ominous signs that the government may not be able to hand over enough of our money because the losses incurred by these speculators are too massive. If credit markets remain in a deep freeze, corporations such as AT&T, Ford and General Motors might go bankrupt. The downward spiral could spread like a tidal wave across the country, especially since our corporate elite, including Barack Obama, seem to have no real intention of bailing out families who can no longer pay their mortgages or credit card debts.

Lenin said that the best way to destroy the capitalist system was to debauch its currency. If our financial disaster continues there will be a widespread loss of faith in the mechanisms that regulate society. If our money becomes worthless, so does our government. All traditional standards and beliefs are shattered in a severe economic crisis. The moral order is turned upside down. The honest and industrious are wiped out while the gangsters, profiteers and speculators amass millions. Look at Lehman Brothers CEO Richard Fuld. He walks away from his bankrupt investment house after pocketing $485 million. His investors are wiped out. An economic collapse does not only mean the degradation of trade and commerce, food shortages, bankruptcies and unemployment; it means the systematic dynamiting of the foundations of a society. I watched this happen in Yugoslavia. I fear I am watching it happen here in the United States.

The Patriot Act, the FISA Reform Act, the suspension of habeas corpus, the open use of torture in our offshore penal colonies, the stationing of a combat brigade on American soil, the seas of surveillance cameras, the brutal assaults against activists in Denver and St. Paul are converging to determine our future. Those dark forces arrayed against American democracy are waiting for a moment to strike, a national crisis that will allow them in the name of national security and moral renewal to shred the Constitution. They have the tools. They will use fear, chaos, the hatred for the ruling elites and the specter of left-wing dissent and terrorism to impose draconian controls to extinguish our democracy. And while they do it they will be waving the American flag, singing patriotic slogans and clutching the Christian cross. Fuld, I expect, will be one of many corporatists happy to contribute to the cause.

This is a defining moment in American history. The next few weeks and months will see us stabilize and weather this crisis or descend into a terrifying dystopia. I place no hope in Obama or the Democratic Party. The Democratic Party is a pathetic example of liberal, bourgeois impotence, hypocrisy and complacency. It has been bought off. I will vote, if only as a form of protest against our corporate state and an homage to Polanyi’s brilliance, for Ralph Nader. I would like to offer hope, but it is more important to be a realist. No ethic or act of resistance is worth anything if it is not based on the real. And the real, I am afraid, does not look good.

[Chris Hedges, a Pulitzer prize winner and a former foreign correspondent for The New York Times, is the author of “American Fascists: The Christian Right and the War on America.” His column appears Mondays on Truthdig.]