Trained in the Use of Cameras by Al Jazeera 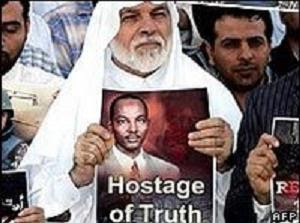 Our nation’s self-respect demands impeachment
By Linda Boyd / May 31, 2998

I wept to see Sami al Haj embrace his young son for the first time after six years in Guantanamo prison. Sami al Haj, a Sudanese news cameraman, was seized in Pakistan while working for al Jazeera News. He was imprisoned, tortured and brutalized by Americans while there. Like most prisoners held at Guantanamo, al Haj was never tried or charged.

After his release, Sami al Haj arrived in Sudan and was immediately rushed to a hospital by ambulance, weakened by his 438-day hunger strike in Guantanamo. His message to our government: “Torture does not stop terrorism, torture is terrorism.”

The U.S. government evidence against him says, “He was trained in the use of cameras by al Jazeera News.”

The American people have a choice ahead of them. They can continue to be shamed as a nation of torturers, or they can put a stop to this administration’s ongoing crimes against humanity. 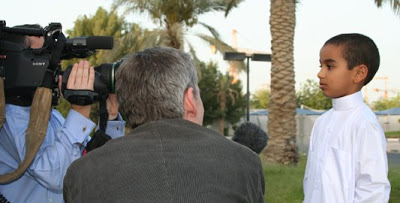 U.S. military and FBI interrogation experts affirm that testimony obtained under torture is inaccurate and unreliable. In May, the FBI issued a scathing 371-page report on torture and war crimes compiled from observations at Guantanamo. Even the CIA concluded in a 1963 study that coercion is “not very helpful outside the context of producing false propaganda.”

Recently, Bush admitted that he knew top administration officials met repeatedly in the White House to discuss coercive interrogation techniques, including torture, and that he “approved them.”

These laws include the Geneva Conventions, the 1984 U.N. Convention Against Torture and the U.S. Constitution. These laws are not invalidated, as the Bush team alleges, if prisoners are not on U.S. soil.

Torture laws are jus cogens, meaning “compelling law,” said constitutional law Professor Marjorie Cohn, in testimony before the House Judiciary Committee. “There can be no immunity from criminal liability for violation of a jus cogens prohibition.”

Being a rogue nation is not in our best interest and exposes our soldiers and citizens to grave danger. Why hasn’t Congress stopped torture?

It is unconscionable to simply wait for the torture team to leave office while hapless individuals are imprisoned without due process and tortured. Sami al Haj spoke of the many prisoners languishing in Guantanamo. In despair, many have tried to commit suicide.

Taking impeachment off the table means there is no limit to the Bush team’s depravity, and that torture will continue in our name.

The administration is already expanding prisons around the world, where the abuse of human rights will continue. A new 40-acre prison is under construction in Afghanistan.

While Guantanamo’s prison population is shrinking, prisoners from around the world are being redirected to U.S. prisons in Iraq, where they’ll be more hidden from the public eye. Particularly disturbing are reports of children imprisoned by the U.S. in the Middle East and Guantanamo.

Eventually, some of our highest officials will be tried for war crimes in a court of international law.

Already, charges of condoning torture are advancing against former Defense Secretary Donald Rumsfeld in France. Author Philippe Sands quotes a judge with experience in international criminal cases who says “It’s a matter of time” before members of the Bush administration are arrested for war crimes while traveling abroad.

Why bother with impeachment if charges for war crimes will eventually catch up with the torture team?

Criminal charges can punish individuals for their crimes, but impeachment has the power to restore the rule of law, and redeem the office of the executive. Impeachment hearings will put the truth on the congressional record. Unlike other subpoenas, impeachment subpoenas cannot be denied.

Impeachment establishes legal precedent, so that future public officials will not be able to abuse power in the same way. The American people can signal to the world that they have taken responsibility for their own government, and ensure that torture will never again be this nation’s policy.

We must demand that Congress make ending torture the top priority. They know about torture, and their silence makes them complicit.

The eyes of the world are upon us. There’s plenty of time to impeach. Our self-respect as a nation demands it.

Linda Boyd is director of Washington for Impeachment.

This entry was posted in RagBlog and tagged Impeachment, Torture. Bookmark the permalink.