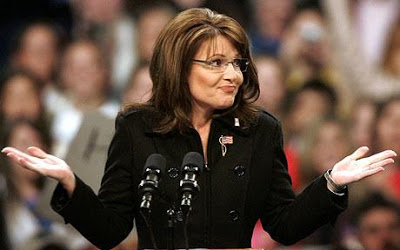 Even as John McCain and Sarah Palin scramble to close the gap in the final days of the 2008 election, stirrings of a Palin insurgency are complicating the campaign’s already-tense internal dynamics.
….
“She’s lost confidence in most of the people on the plane,” said a senior Republican who speaks to Palin, referring to her campaign jet. He said Palin had begun to “go rogue” in some of her public pronouncements and decisions.

“I think she’d like to go more rogue,” he said.

ABC News’ Kate Snow and Imtiyaz Delawala report: While Alaska Gov. Sarah Palin often speaks on the campaign trail of having “ruffled feathers” during her time as governor of Alaska, the Republican vice presidential nominee appears to have ruffled feathers within the McCain camp.

Aides to Sen. John McCain anonymously attacked Palin in several reports today, criticizing the Alaska governor for diverting from the McCain campaign’s message, suggesting Palin was unhappy with certain campaign aides and accusing her of thinking more about her political future than about the success of the McCain-Palin ticket.

In an interview with CNN today, one McCain adviser anonymously called Palin “a diva” and said “she is playing for her own future” political prospects.

“She is a diva. She takes no advice from anyone,” the advisor told CNN. “She does not have any relationships of trust with any of us, her family or anyone else. Also she is playing for her own future and sees herself as the next leader of the party. Remember: divas trust only unto themselves as they see themselves as the beginning and end of all wisdom.”

Another McCain aide anonymously told The Politico that Palin has been “going rogue” by criticizing strategic decisions by the McCain campaign, such as their use of robocalls against Sen. Barack Obama in recent weeks, and the decision to pull out of the state of Michigan in early October.

The report in Politico cited tensions between the Palin and McCain camps, saying that Palin had become frustrated with McCain top advisors Steve Schmidt and Nicole Wallace. The two aides were key in formulating the early media strategy for Palin, limiting her to two major interviews with network news anchors Charles Gibson and Katie Couric –- both of which were widely criticized.

Schmidt and Wallace do not regularly travel with Palin, although they have during critical moments, including when she returned to Alaska for her first network interview with ABC’s Gibson, and during her week of secluded debate preparation at McCain’s ranch in Sedona, Arizona.

Wallace told ABC News today, “If folks want to lay this at my feet and throw me under the bus, my belief is that the graceful thing to do is to lie there.”

Last Sunday, Palin took part in an impromptu media availability with traveling press on the tarmac of the Colorado Springs, Colo., airport — without giving advance notice to her own advisers.

When Palin walked off the plane in Colorado Springs, the Alaska governor headed towards local television cameras on her own to answer questions, where she was quickly swarmed by national media.

One high-level McCain aide defended the decision to hold back on more exposure of Palin to the press in the early weeks after the Republican National Convention.

“I don’t regret the campaign making those decisions,” the aide told ABC News, saying nothing would have changed if Palin had given a press conference in the early stages of the campaign.

The McCain aide also disputed the notion that Palin has been freelancing for the benefit of her own political fortunes, saying she has been a “team player” through the general election. The aide also defended the decisions that have been made in the Palin campaign, and says the criticism being tossed at the vice presidential nominee now are what happens as the campaign faces potentially losing the election.

Palin spokeswoman Tracey Schmitt responded to the Politico report Saturday morning, telling reporters aboard the Palin campaign plane in Sioux City, Iowa, that “unnamed sources with their own agenda will say what they want, but from Governor Palin down, we have one agenda, and that’s to win on Election Day.”

Another Palin aide said late today that the governor was aware of the reports of infighting on her staff and comments about her but had shrugged it off.

“She saw it and laughed and said, ‘OK now where’s our next rally?'” the aide said. The aide said Palin is focused on the next nine days and has shown no sign of preparing for a political future beyond the prospect of being vice president.