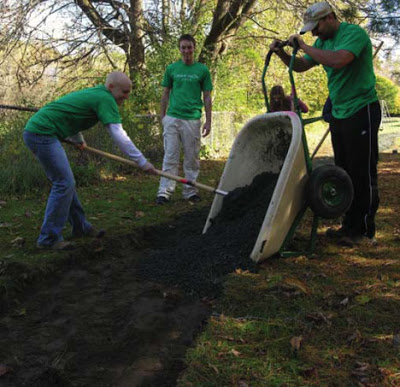 Expressing the Common Good through cooperative effort. Photo source.
The ‘Common Good’ is a Rose that Smells as Sweet
By Zwarich / The Rag Blog / November 3, 2008

In his recent piece entitled ‘Socialism, Capitalism: What’s in a Name?‘, David Hamilton has hit upon the crucial key to success for the American Left. In this excellent essay, he posits that we should examine the terminology that we use to advance our social ideals. I could not agree more, and would like to support his thesis, and hopefully direct more attention and discussion to this crucially important idea.

I heartily agree with Mr. Hamilton’s implied thesis that too many of us insist on using terminology that has been loaded with layer upon layer of cultural mythology. Many people use these terms, like ‘socialism’ and ‘capitalism’, without having any clear idea in mind what they mean. They only know that the cruelly unjust system under which we live now is referred to as ‘capitalism’, and they have come to believe in a false binary reality in which something called ‘socialism’ is the only alternative.

It is my own impression, derived from a lifetime as a leftist, that very few people who advocate for ‘socialism’ have ever read Marx or Engels at all, or have even a rudimentary understanding of the extended implications of the kind of highly centralized economy posited by these mid 19th century thinkers.

Our modern cultural mythology has been heavily influenced by the historical record of the abhorrent ‘on the ground’ experiences that have resulted from the practice of noble socialist theory, to the extent that ‘socialism’ has come to symbolize the horrors of totalitarianism, with which it has always been closely associated in the real, (as opposed to the theoretical), world.

When many people use this word ‘socialism’, it is my experiential impression that they are not intending to advocate for a ‘dictatorship of the proletariat’, or any other policies that History has shown to be abject failures. They are simply advocating for what Mr. Hamilton so aptly suggests here, (the commons), but does not call by its full proper name, the Common Good.

The culture of indulgence of individual Desire that has developed in America with the rise of mass media is a perversion of the culture of the Common Good that was once much more characteristic of the thinking, manner, and teaching of the common citizenry. Americans once believed, and taught our children to believe, that an individual has the social obligation to restrain her or his Desire within the bounds of the Common Good.

It is fine, and admirable, and to be encouraged, for ‘the individual’, (according to this culture of the Common Good), to strive to achieve her or his desires and dreams, but it is the obligation of each to restrain dreams that infringe on the dreams and desires of others. Each individual must fit her or his dreams and desires within the shared social concept of the Common Good.

It is instinctively abhorrent to human sensibility that some should be allowed to garner such a degree of wealth and privilege that others are deprived of the necessities of a dignified life. Beneath this modern culture of the celebration of selfishness and greed, we have an instinctive sense of the Common Good. No parent teaches their children that they are free to grab a portion that deprives their brothers and sisters of their fair share.

I have long tried to get leftists in America to quit using emotionally charged terminology that is poorly understood and weighted down with the baggage of an historical record of totalitarianism. We should use terminology that has universal human appeal, and rather than refer to ‘capitalism’ or ‘socialism’ as mega-systems, we should refer to specific policies that either serve, or damage, the Common Good.

Health care, for example, is a human right. Our basic need and desire to be healthy should not be allowed to be grossly exploited as a profit opportunity. Likewise other needs that are common to all of us, such as our basic utilities, such as water and energy, or our mass communications system, or our basic food production and distribution, should not be allowed to be held captive by private interests to be grossly exploited for their opulent profit. All such policies can have universal appeal, (and once did), because they conform to the instinctive human perception of the Common Good.

I have tried to get the American Left to look at the empirical evidence of the historical record, or else to conclude from the most basic logic that seems like it should be easily clear to all, that neither Socialism nor Capitalism, nor any other ‘ism’, are the major determinants of social justice. It is the degree of True Democracy in a society that determines whether or not the society’s economic system serves the Common Good, or private gain.

We need only look at the historical record to see that in countries where Marxist theory has been put into practice, Democracy has been an absurd pretense, with the inevitable result that the people have soon discovered that by ‘overthrowing capitalism’ they have only traded one set of oppressive masters for another.

Why advance a concept represented by a word, ‘socialism’, that is used as a epithet by so many people, when we could advance concepts, like Democracy, and the Common Good, that are so deeply and inherently ingrained in the psyche of American culture? True Democracy, by its very intrinsic nature, cannot serve any purpose other than to advance the Common Good. This social concept has been severely assaulted by the culture of selfishness and greed at the level of mass consciousness, but when most American mothers and fathers rear their children, they still teach them that they must ‘share their toys’, and ‘consider others as they would have others consider them’.

These basic concepts, Democracy, (TRUE Democracy, not the perversions that have been purveyed by socialists and capitalists alike), and the Common Good, are the concepts that will lead us to the victory that we, the American Left, are destined to achieve.

This entry was posted in Rag Bloggers and tagged Capitalism, Socialism. Bookmark the permalink.