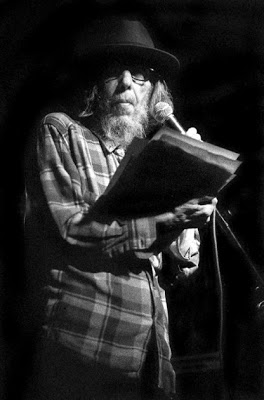 Despite all my waspy-whitebread cultural upbringing I fell in love with this individual immediately, even though he was probably the ugliest member of the meanest looking group I had ever seen.

See videos and more images, Below.

During the same teenage trip to NYC in 1966 when I witnessed Howlin’ Wolf on MacDougal Street I also got to see another band. It was the next evening and even though I was out of money, the shill at the door to the Players Theatre corralled me in to see a group I’d never heard of. Don’t worry, you’ll love it, he said as he ushered me into a place that looked just like a dark church.

I sat down on a pew and after a few more audience members had been dragged in, the drummer came onstage and sat behind the kit. He looked like the meanest Hells Angel I had ever seen. Make that the only Hells Angel I’d ever seen.

A young kid who looked younger than me (16) plugged in an electric guitar and after a bit of anti-showbiz stage business, what seemed to be the lead singer emerged. He was scary too, and old, but it looked like he might have a sentimental streak. Maybe. The band was pretty amateurish, except for the kid on lead guitar.

The gruff singer was perhaps intentionally bad, a spoof maybe, reading his pretentious poetry from typewritten sheets. The lyrics were deep, mysterious, some sort of freeform Egyptian temple hokum. After a couple of numbers — were they actually songs? — the stage darkened and a solo spotlight fixed on a new figure entering stage right. He shook a broomstick with bottlecaps nailed all over it as he shuffled in like an inner city shaman

God was he ugly. His face was all pock marked (actually freckles), characteristically Jewish in the sense of the worst evil medieval stereotypes. A gargoyle. Uglier than Uncle Fenster or Tiny Tim and yet… there was a glow of gentleness and goodness that was impossible to explain. Despite all my waspy-whitebread cultural upbringing I fell in love with this individual immediately, even though he was probably the ugliest member of the meanest looking group I had ever seen.

It didn’t hurt that the song he was chanting over the surging rock beat was titled “Jack Off Blues.” Wow, now that was some kind of naked adolescent human honesty I’d never seen before. The band was the Fugs and the “singer” was Tuli Kupferberg. Suddenly they broke into a startlingly beautiful song by Tuli, “Morning Morning,” with the exquisite guitar work of (yes)16 year old Jonathan Kalb (brother of Danny) that went on for maybe 20 minutes. What a mixture of opposites. Rock and roll art and beauty emerging from the derelict dregs of the Lower East Side. Could dirty old men Beat poets posing as a Beatles band still get the chicks?

These are the obvious concerns of poetry and the Fugs certainly got that one right. 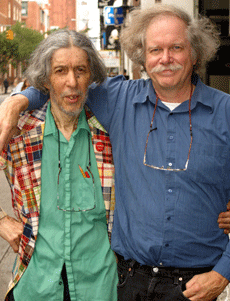 Tuli Kupferberg and Ed Sanders of The Fugs. Photo ©2001 Bob Gruen.
Alas, the Fugs never got to be as big as the Beatles. They got bumped out of their spot at the Players Theatre in the late 1960s by the Mothers of Invention, another scary rock group that actually used professional musicians. Frank Zappa, the leader of the Mothers, called the Fugs the Three Stooges. Frank’s own sense of humor was just as sexual as the Fugs but actually far more cynical and juvenile. He never had a shred of Tuli’s earnest poetic humanist sensibilities. Lucky for Frank he was such a hot guitar player.

In the 1980s I was part of the All Species Circle, presenting totem art projects, doing performances wearing animal masks in public. Another member of the group, Rick Heisler, did a humor cassette with Tuli Kupferberg and I got to do the photography for the cover. On our way out to the shoot in Prospect Park, Tuli picked up a stray piece of trash on the ground which we later used as part of the arrangement for the photograph. It was a banjo shaped cast iron burner from an oil furnace. Later I realized that the same object had appeared on the
cover of the first Fugs album in 1965. Like I said: shamanic magic.

Tuli passed away this week — Monday, July 11 — after suffering a series of strokes. He was 86. He had been active in the Village since 1929. His self deprecating humor and uncompromising political mysticism was a constant influence in the magic zone. Poetry, pacifism, rock and roll music, later cartoons in the Village Voice. A giant in the field of modesty. A true poet and definitely one of my inspirations in life.

Fug on Tuli. What a beautiful man.

The Revolting Theater — Part 2: Tuli Kupferberg
(Not for the weak of heart — ed.) 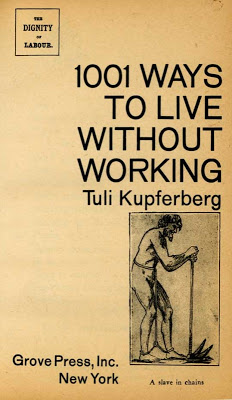 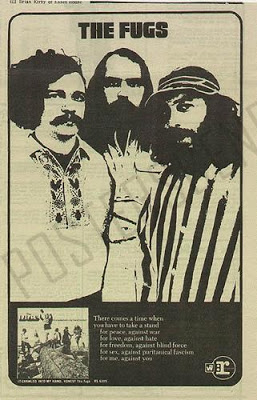 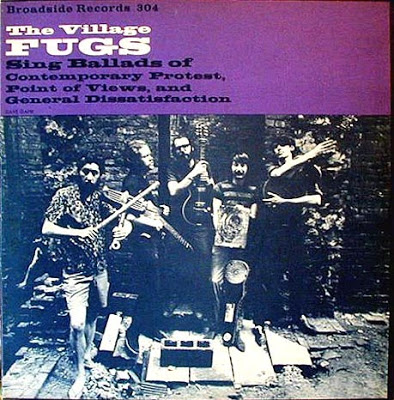