Turkish PM Calls Gaza What It Was : ‘Killing’ 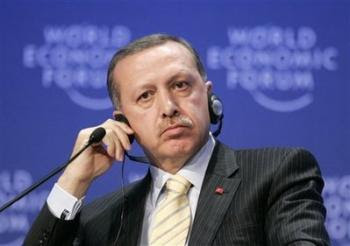 See video of Erdogan’s remarks below.

Recep Tayyip Erdogan argued with Israeli president over Gaza offensive, before storming out

Turkey’s prime minister, Recep Tayyip Erdogan, arrived home to a tumultuous reception of cheering crowds early today after storming out of a debate in Davos over Israel’s recent offensive in Gaza.

Hours after clashing with the Israeli president, Shimon Peres, in angry scenes at the normally sedate world economic forum, he was welcomed at Istanbul’s Ataturk airport by thousands of supporters waving Turkish and Palestinian flags and chanting “Turkey is proud of you”. Sympathisers also left bouquets of flowers at his official residence.

The outpouring of support displayed the domestic political capital Erdogan gained from his performance at the Swiss resort, where he told Peres: “When it comes to killing, you know very well how to kill.” He then walked off the stage, declaring that he would never return to Davos, after claiming he had not been allowed to speak by the debate moderator, the Washington Post columnist David Ignatius.

Erdogan also accused Peres of raising his voice and claimed the Israeli statesman had been allowed more speaking time than himself and the panel discussion’s two other participants, the UN secretary general Ban Ki-moon, and Amr Moussa, secretary general of the Arab League.

Peres had earlier made an impassioned defence of Israeli actions in Gaza, asking Erdogan: “What would you do if you were to have in Istanbul every night a hundred rockets?” Erdogan responded by saying: “President Peres, you are older than me and your voice is very loud. The reason for you raising your voice is the psychology of guilt … I know very well how you hit and killed children on the beaches.”

The prime minister’s wife, Emine – who this month organised a Women For Peace In Palestine lunch for the wives of Islamic dignitaries – also became involved, bursting into tears after telling reporters that “everything Peres said was a lie”.

Erdogan’s outburst was his most high-profile in a series of outspoken attacks on Israel’s Gaza operations. He had previously called the offensive – in which around 1,300 Palestinians died – a “crime against humanity” and demanded Israel’s expulsion from the UN.

His stance has shocked Israeli officials — used to considering Turkey as their closest regional ally — but played to the pro-Palestinian sentiments of the overwhelmingly Muslim Turkish public. Mass demonstrations in favour of Hamas have been staged in Istanbul and other cities.

Such sympathies have prompted suggestions that Erdogan’s rhetoric has been mainly for domestic political consumption and aimed at wooing voters at forthcoming municipal elections in March. Jewish groups have also voiced fears that the government’s fierce anti-Israeli criticism is fuelling antisemitism The row with Peres overshadowed a dispute between the government and the International Montetary Fund that had seen Erdgoan accuse the fund of setting unacceptable conditions, after negotiations were suspended over a proposed loan to help Turkey weather the economic recession.

On arriving at Ataturk airport, he depicted his Davos walk-out in nationalist terms, telling journalists: “This was a matter of the esteem and prestige of my country. I could not have allowed anyone to poison the prestige and in particular the honour of my country.”

He also denied his comments were aimed at the Israeli people or Jews in general. A world economic forum spokesman said Peres spoke with Erdogan on the phone after the debate and expressed his respect for Turkey.

Before the Gaza hostilities Turkey had been mediating in negotiations between Israel and Syria. There are also fears that the pro-Israel lobby in the US will back moves to recognise the massacres of Armenians by Ottoman forces in the first world war as genocide, a move Turkey vehemently opposes.

1 Response to Turkish PM Calls Gaza What It Was : ‘Killing’