Turning to High-Tech to See Through the Economic Mess 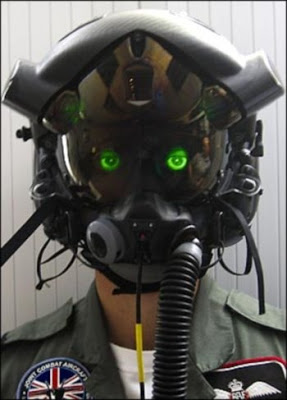 Fighter pilot helmet with x-ray vision — to see through those marble walls! And that ain’t nothin, honey.
Using 21st century anti-insurgency technology to prevent the next stock market meltdown
By Doug Porter / September 23, 2008

The Washington Post and the Los Angeles Times have both run stories in the past few weeks referring to new super secret technologies being used by the US military that have contributed significantly to the decline in violence in the war in Iraq . Both papers have only made fleeting references to the methodologies involved, citing concerns that foreign governments/terrorists will use any disclosures to development counter-technologies that will negate the advantages that these new super secret technologies give the US military.

To quote the Times,

“American officials requested that details of the new technology not be disclosed out of concern that doing so might enable militants to evade U.S. detection. But officials said the previously unacknowledged devices have become a powerful part of the American arsenal, allowing the tracking of human targets even when they are inside buildings or otherwise hidden from Predator surveillance cameras.”

Whenever the press says something is “super secret”, I utilize my own private technology (aka Google) to gain enlightenment. It’s a good thing that foreign governments/terrorists haven’t figured this out, except that they have. The Chinese government has already stolen the basic drone technology, and there are numerous references around the web to the techniques that have made these weapons so effective.

Without revealing any more secrets than Google provided in three basic searches, let’s look at the some of the basic technology in use:

** The ability to see through walls: Known by its acronym (STTW), a several year old report from the National Defense University cites a system that can “detect the presence of personnel within rooms (stated to be doing well through 12 inches of concrete),” as well as a commercially developed system with a “30-foot standoff capability.” STTW is new application of radar technologies. Intensive R&D has reduced the size of the equipment to about the same size as an automotive battery, although it is apparently very heavy, as its utilization reduces the amount of weaponry that Predator drones can carry.

** By combining the STTW technology with distributed sensors and utilizing marching cubes, a computer graphics algorithm utilized for MIR and CT scan images, it is now possible to create three dimensional images. The effect of these devices, according to a former U.S. military official interviewed by the Times, is that insurgents, even indoors, “are living with a red dot on their head.”

** Last, there have been significant advances in military SIGINT programs. (That’s Signals Intelligence) These breakthroughs are enabling the military to gain intelligence based on the “signatures” of various communication devices. It’s all terribly triple secret, and if I were to explain any more here, I’d have to shoot you.

There is undoubtedly more to all this “super secret” stuff than the government has been willing to leak to the press. If Cold War History can be used as a reliable model, most of the world’s intelligence services and a great many insurgent groups will have all the gory details long before the American public gains access to this information. The “SECRET” stamp means that moral, legal, or financial questions about the utilization of this technology can and will be effectively avoided behind the twin shields of National Security and the War on Terrorism.

AND , it also means some technologies that the military has developed for battlefield use in the various middle east/ near east conflicts will likely (if they haven’t already) be allowed to “trickle down” for domestic use. Of course, because the technologies are all secret, there will be no legal, moral, or ethical standards in place governing their use. Our friends from the north (aka Canada ) have been playing with this stuff for years and are pretty honest about its potential for domestic use.

So, let’s get to the point. The government has X-Ray Glasses technology, can leap tall buildings with a single bound (or hover over them for hours, as needed) and can pretty much get to all your vital secrets using your cell phone, Blackberry, automotive GPS and probably even your iPod. Members of both political parties, a gaggle of pundits and even the President agree that we have a “national crisis” going on at present on Wall Street that threatens the very foundations of our Nationhood. It’s a short leap from National Crisis to National Security—if the country’s broke, how are we gonna pay for more wars?

It’s time to bring the technology that’s been so useful in Iraq home and put it to use Saving Our Economy. In the past, these kinds of military programs have been used for spying on domestic dissenters and the occasional criminal conspiracy. Now it’s time to step up to the plate and hit a homer. The government can spare us the details, if they like–just give us the facts. Wouldn’t it be in America ’s best interest to know when Treasury Secretary Paulson and his ilk were selling off all the “assets” for deeply discounted prices that our tax dollars have recently acquired? Wouldn’t this be the ultimate oversight? Wouldn’t it be terrific if all the CEO Blackberries suddenly began spewing out insider info for all to share?