Tutu Visits Scene of Massacre; Calls For End to Blockade 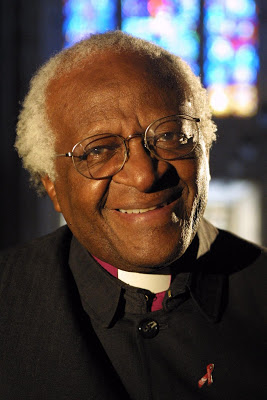 To try this out I googled “Desmond Tutu Gaza” and sure enough I got not one U.S. media hit. Democracy Now! radio had something but no newspaper at all. I went to the New York Times web site and got nothing.

This is all over the British and Israeli press.

“There can be no justice, no peace, no stability, not for Israel, not for the Palestinians, without accountability for human rights violations.”

Why was Desmond Tutu’s trip to Gaza censored by the U.S. media?

When Nobel Laureate and world renowned peacemaker Desmond Tutu goes to Gaza to visit the site of an Israeli massacre; that’s news, right? So why is it impossible to find any account of his trip in America’s leading newspapers? Is it because any information that is incompatible with the territorial ambitions of the Israeli leadership is simply “disappeared” into the media-ether?

Archbishop Tutu was a leader in the struggle against apartheid in South Africa. He is neaither a terrorist nor an anti-Semite. His work as a human rights activist spans 4 decades. Like former president Jimmy Carter he was shunned by the Israeli government and refused entry into Gaza.

Two days earlier author and university professor Norman Finkelstein was refused entry into Israel even though he’s Jewish and had parents who survived the Holocaust. Isn’t that enough to gain entry or must one accept the prevailing doctrine of the far-right extremists in the Olmert government who think that it’s okay to deprive Palestinians of their rights whenever they see fit?

Bishop Tutu had to go through Eqypt to get to Beit Hanoun; the town where 18 members of the al-Athamna family–including 14 women and children–were killed by Israeli artillery fire in November 2006. Tutu said that hearing “from the survivors of the massacre” had left him in a “state of shock”.

“Firing in a way that cannot distinguish between civilians and combatants is clearly a violation of international humanitarian law,” she said. “I don’t think that the idea of a technical mistake takes away from the initial responsibility of the action of firing where civilian casualties are clearly foreseeable … it has to be foreseeable when you give yourself such a small margin that any error has the potential to lead to civilian casualties.” (UK Guardian)

Chinkin is right, of course. It was a massacre and should be thoroughly investigated by the international community. The responsible parties need to be held accountable.

According to the UK Telegraph, “No soldiers were ever charged in connection with the incident. Israel blocked attempts by the UN’s Human Rights Council to investigate the shelling, saying that members of the body were “biased”.

So now the members of the UN’s Human Rights Council can’t be trusted either?!?

Tutu ended his three day mission by calling for an end to the blockade of food, medical supplies and economic assistance to the Gaza Strip and by condemning the “culture of impunity” in which one nation arbitrarily imprisons one and a half million civilians who are left to languish in abject poverty and hopelessness.

“We saw a forlorn, deserted, desolate and eerie place,” Tutu said “The entire situation is abominable. We believe that ordinary Israeli citizens would not support this blockade, this siege, if they knew what it really meant to ordinary people like themselves.”

Tutu is right. This is not the work of the Israeli public, which (according to a recent poll in the Jewish newspaper Ha’aretz) 65% want direct negotiations with Hamas. This is the work of fanatics at the top-rung of the political system who—much like the Bush administration—operate without any regard for the will their people and without any concern about the vast human suffering they are creating.

Tutu met with the Palestinian prime minister Ismail Haniyeh on Tuesday and told him that, while he was opposed to the Israeli occupation, he condemned the rocket fire by militants from Gaza.

“True security, peace, will not come from the barrel of a gun,” he said. “It will come through negotiation; negotiation not with your friends, peace can come only when enemies sit down and talk. It happened in South Africa. It has happened more recently in Northern Ireland. It will happen here too.”
(UK Guardian)

Tutu went to Gaza for peace and not one newspaper in the United States covered the story. Apparently, the “culture of impunity” extends to America’s media as well as the Israeli leaders who killed the 18 Palestinians at Beit Hanoun.