The following is part of a discussion among members of Austin MDS about the election of Obama, the possibility of real change through the Democratic Party, and the efficacy of the third party option. 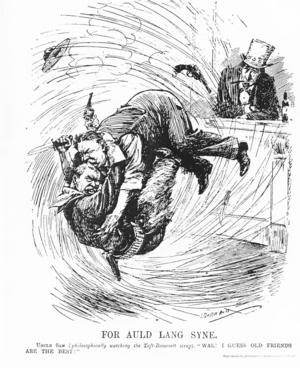 ‘I have come to believe that because of the lack of proportional representation in the American political system, a two party system here is almost a law of physics.’
By David P. Hamilton / The Rag Blog / November 16, 2008

I have voted for third (or fourth) party candidates for president eight times. I did not do so in 2008, but I may do it again if I feel a protest vote is in order. However, I have come to believe that because of the lack of proportional representation in the American political system, a two party system here is almost a law of physics. Each of those two parties will be relatively centrist in order to capture a majority.

There have been historical examples of American third parties being “successful” by some definition other than becoming the majority and governing party. The Dixiecrat rebellion against the Democratic Party that began in 1948 triggered by Truman’s integration of the military became the cornerstone of the Republican’s majority embracing racism in 1968. The anti-slavery Republicans emerged to replace the Whigs in 1852, but the two party system remained with the Whigs disappearing altogether. Unless the basic rules of American democracy are changed, we will always end up with a competition between two only slightly ideological political parties. This is also the case in Europe when you have a winner take all situation, such as in France between “Guallist” Sarkozy and “Socialist” Royal.

For most of my life, the left having access to a presidential administration was realistically a preposterous notion. Whoever thought that we might be accepted into the councils of any Republican or any Democrat since FDR? That is not the case with Obama, and in that way the times have profoundly changed. The peace movement was a very important element of his base. We deserve a continuing presence among his advisers, but we will have to continue to win that role by continuing to build mass movements for change.

I hope that in a couple of years many of those now taking shots at Obama over positions he took in order to get elected in a system where competition for the center is the only game in town (.eg., Afghanistan) will be singing a new tune. In the meantime, many of us can’t get over a lifetime of being on the outside with no key.

Many things that have come to pass once were considered impossible. Just because our political system has failed to produce a third or fourth party does not mean it cannot happen. Very simply, if one-fourth of the population were smart enough to vote Green and another quarter voted Libertarian, then the Republicans and Democrats would have to split the remaining half, leaving us with four relatively equally supported parties. It is not likely in the next couple of years. It will not happen by itself. But that does not mean it is impossible. It has got to start with those of us who are paying enough attention to realize that the Democratic Party and the Republican Party have had a century and a half of shared power, and have utterly failed to represent the people of this nation, except when we have forced their hand by getting out in the streets and/or by winning cases in the courts.

When it was a new party, the radical wing of the Republicans partnered with activists to bring certain civil rights to former slaves, although those rights were still subverted for nearly another century. Neither party helped us break the injustice of child labor. Labor unions helped us achieve that, as well as the forty hour work week with weekends. Neither party gave women the vote. Women themselves had to fight for it. And the realization of those civil rights for the descendants of slaves (or anyone who looked like them), while originally put on the books in the era of the Radical Republicans, did not come about until black Americans worked together to fight for them.

Of course, these gains required more than just the activists on the front lines. They also required cultural shifts in the general population. Women gained the right to vote nationally by a constitutional amendment, which of course, required the support of most of the country. Blacks could not have won their civil rights in the sixties if the rest of the country had still believed the Jim Crow laws (and the oppressive and violent actions of the police) were justified.

Similarly, we will not have a viable third (or fourth, or fifth) party in the US until we have a shift in public opinion that one is needed. When (not if) Obama fails to really change anything in American politics, we may have a small opening. However, in reality, we have to expect a much longer fight. Nevertheless, we cannot wait to begin it. That is part of the reason why I have insisted (many times on this list) that those of you who understand enough to recognize that a vote for either Republocrat in the presidential race here in Texas (or anywhere else in the old south, except Florida) was a wasted vote should have voted for Cynthia McKinney (or for those who lean more right on economic policy, Bob Barr, or for those who lean more right on social policy, Chuck Baldwin). Unfortunately, apparently, some of our best and brightest still failed to heed my call and supported the Democrat. Possibly worse, here in Travis County, about 900-1000 progressives were smart enough not to vote for Obama, but about 700 of them voted for Nader, which was also a wasted vote, and only about 200-250 were smart enough to vote for McKinney. Oh well. We fight on.