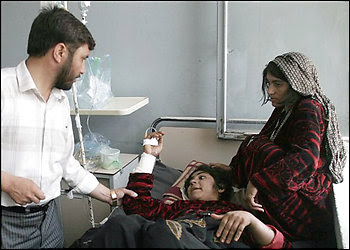 An Afghan doctor, left, examines Zinat Gul’s wounded hand, who allegedly was wounded by a U.S. air strike in Shindand district, as her mother looks on at a hospital in Herat, east of Kabul, Afghanistan, on Monday. Photo by Fraidoon Pooyaa / AP.
Most fatalities in U.S.-led attack said to be children
By Candace Rondeaux and Karen DeYoung / August 27, 2008

ISLAMABAD, Pakistan — United Nations officials in Afghanistan said Tuesday that there was “convincing evidence” at least 90 civilians — two-thirds of them children — were killed in a U.S.-led airstrike last week that caused the Afghan government to call for a review of U.S. and NATO military operations in the country.

Kai Eide, the top U.N. official in Afghanistan, said local officials and residents in the western province of Herat corroborated reports that 60 children and 30 adults had been killed in an Aug. 21 military operation led by U.S. Special Operations forces and the Afghan army.

In a statement, Eide called the incident a “matter of grave concern to the United Nations” and said he had “repeatedly made clear that the safety and welfare of civilians must be considered above all else during the planning and conduct of all military operations.”

U.S. forces in Afghanistan have increased their reliance on air power since last year, causing a corresponding increase in civilian deaths. The Herat assault appears to have caused the largest civilian loss of life attributed to U.S. forces since the war began in late 2001.

Pentagon spokesman Bryan Whitman said military commanders in Afghanistan continued to believe that the attack in Herat “was a legitimate strike on a Taliban target.”

Whitman promised a detailed investigation. “This has a lot of people’s interest, and my sense is they want to be thorough and complete. We’re doing it as expeditiously as we can.”

The U.N. findings came as the government of President Hamid Karzai demanded more coordination between Afghan and international security forces and called for greater accountability on the part of U.S. and NATO troops operating in the country. Afghanistan’s Council of Ministers called Monday for a halt to aerial bombings and to what it called overly aggressive house raids and illegal detentions. The council demanded an agreement with U.S. and NATO forces that would define the parameters of international military operations in Afghanistan.

Afghan officials and independent investigators say more than 165 civilians have been killed in four airstrikes in the past two months. The deaths have angered Afghans, who are pressuring Karzai to seek greater control over foreign troops even as resurgent Taliban fighters increase their attacks on the international presence in Afghanistan.

Sultan Ahmed Baheen, spokesman for the Afghan Foreign Ministry, said his office and the Afghan Defense Ministry have been working to draft a document that would require more coordination between Afghan security forces and international troops to minimize civilian deaths and damage from military operations. About 60,000 troops from 40 nations are in Afghanistan, including 32,000 from the United States.

At the United Nations on Tuesday, Russia introduced a sharply worded draft statement expressing concern about reports that U.S. airstrikes in Afghanistan had caused “numerous civilian casualties, including women and children.”

U.S. officials in Washington said they have been anticipating that Karzai will demand a formal status-of-forces agreement with the United States; the Bush administration is finalizing a similar accord with Iraq after protracted negotiations. Although U.S. troops participate in the NATO-led force in Afghanistan under a U.N. mandate, the bulk of U.S. forces fall under Operation Enduring Freedom, a U.S.-only force governed by an exchange of diplomatic notes signed with the Afghan government in May 2003.

At least 90 percent of all aircraft being used in the Afghan war belong to U.S. forces operating under their own command structure. “Civilian deaths are not a NATO problem,” said Marc Garlasco, a military analyst at New York-based Human Rights Watch. “Civilian casualties are primarily being caused in airstrikes in support of the counterterrorism mission that the United States is running completely separate from the NATO-run counterinsurgency conflict,” said Garlasco, who has compiled a report on civilian deaths from airstrikes to be published next month.

Last year, as Taliban attacks increased, the number of civilian deaths caused by airstrikes spiked sharply, from 116 killed in 2006 to 321 in 2007, according to figures issued by the U.S. Air Forces Central Command. The number of sorties increased by about one-third in 2007, and the amount of munitions that were dropped more than doubled, according to the data.

Garlasco said the amount of bombs dropped by U.S. airstrikes in June (317,000 pounds) and July (270,000 pounds) is equivalent to the total tonnage dropped in 2006. The vast majority of the strikes, Garlasco said, are unplanned missions called in by U.S. Special Operations ground forces fighting Taliban units or because a “target of opportunity” is located through on-the-ground intelligence.

Unlike in Iraq, where U.S. forces frequently use 250-pound bombs to make attacks more precise, Garlasco said American troops in Afghanistan “are still using a lot of” 2,000-pound bombs.

The Herat bombing occurred around midnight after U.S. Special Operations forces and Afghan troops led a raid on a compound in the town of Azizabad where they said they thought a Taliban commander was holding a meeting with supporters. U.S. military officials said at least 30 insurgents were killed, including the commander, who is known as Mullah Siddiq.

Afghan officials in Herat said the bombing occurred as dozens of villagers gathered for a memorial ceremony for a villager who was killed last year. Ahmed Dehzad, one of the province’s parliamentary representatives, said that local officials had received reports of Taliban activity in the vicinity several days before the ceremony but that coalition forces did not issue a warning before the attack on a compound near where the ceremony was held.

A spokesman for the Afghan army’s western command said Saturday that an army investigation into the incident confirmed that about 60 children and 19 women had been killed in the airstrike. The spokesman, Raouf Ahmedi, said there was no evidence that any of those killed had ties to the Taliban.

The U.N. investigators found that at least 15 people were injured in the operation.

A U.S. official in Washington, speaking on the condition of anonymity, said the Taliban has become adept at spreading false intelligence to draw U.S. strikes on civilians. “The fact is that the Taliban now has pretty good insight into where we’re picking up information and how we’re developing it into actionable intelligence,” the official said. “They’ve figured out a way to misguide us.”

[DeYoung reported from Washington. Staff writer Colum Lynch at the United Nations and special correspondent Javed Hamdard in Kabul contributed to this report.]