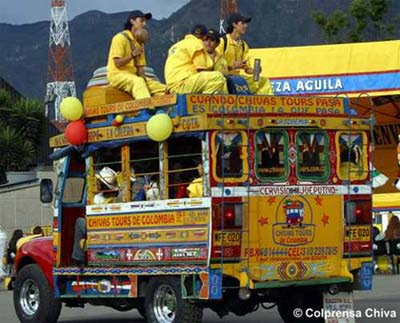 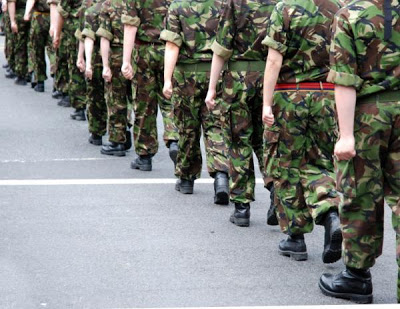 Top, Chiva party bus Cartegena: Party down. Below, “The Yanks are Coming!”

CARTAGENA DE INDIES, Colombia — THEY’RE HERE! A scant nine days after the U.S. and Colombia signed a new military pact, I saw the first of Gawd-knows how many U.S. troops assigned to this country, right in front of my pad. I had gone to the local corner store to sit at one of the couple of tables out front, watch the street life, and sip an Aguila, the local Budweiser type of beer.

I saw them coming fifty meters up the block, four of them, with a local young lady who I recognized in tow. They wore U.S. casual clothes, three had well-shined military footwear, and all had the appropriate haircuts. As they drew closer I could hear their hometown English. They were looking for something, swiveling their heads, searching up and down the block. They stepped into the tienda to ask directions. One of them spoke language school Spanish, devoid of idioms, slang or any discernible accent. He asked where they could catch the Chiva bus.

The Chiva is a “party bus.” For 30,000 COP (about $15) one can board, get a bottle of cheap rum and a Coca-Cola, a drum or set of maracas, and be toured around the city, accompanied by very loud music and a lot of drunken yelling, for about an hour. The clerk pointed across the street and advised them that the bus comes every half hour. The troops looked like they were enjoying their new status. The newly-inked treaty gives U.S. military personnel diplomatic immunity from arrest by Colombian authorities.

While the U.S. Embassy in Bogotá says the new agreement, providing for expanded U.S. access to Colombian military bases, goes into force immediately, a Colombian court ruling finds the agreement is “broad and unbalanced” in favor of the U.S. Indeed: the agreement puts no limits on the number of U.S personnel to be deployed in Colombia or the number of military bases they could use.

The Colombian State Council said in its ruling that the agreement gives the U.S. the power to decide what operations will occur, gives immunity to U.S. troops, allows access to bases beyond the seven named in the agreement’s text, and defers other important questions about military operations to future “operational agreements.” The Council reviewed 15 prior treaties and declarations cited by President Alvaro Uribe’s government as the foundation for the new base pact, and found that none offer a basis for stationing U.S. troops or US. use of Colombian bases.

It concludes that the agreement is a treaty, and therefore must be approved by the Colombian Congress and reviewed by the Constitutional Court. Foreign Minister Jaime Bermúdez, in signing the deal, had said the government would bypass such formalities.

The new U.S. air base in Palanquero, 120 miles north of Bogota, will “expand expeditionary warfare capability” and “improve global reach” for “conducting full spectrum operations,” according to a newly disclosed Pentagon document submitted to the U.S. Congress. The document describes South America as “a critical sub-region of our hemisphere where security and stability is under constant threat from narcotics-funded terrorist insurgencies, anti-US governments, endemic poverty, and recurring natural disasters.” The document seemingly contradicts well-publicized claims by U.S. Ambassador William Brownfield that soldiers based in Colombia will “never, never, never” participate in armed operations, and that the base agreement doesn’t allow operations outside Colombian territory.

The embassy uses the guise of the discredited “drug war” in all of its statements, as if that would add legitimacy to this invasion of Colombia.

President Evo Morales of Bolivar recently criticized this tactic. Morales spoke of his experiences as a coca grower and union leader facing the brunt of U.S. militarization. “I witnessed this,” he said, when describing the repression. “So now we’re narcoterrorists. When they couldn’t call us communists anymore, they called us subversives, and then traffickers, and since the September 11 attacks, terrorists,” Morales said. “The history of Latin America repeats itself.”

Meanwhile in this country, the war heats up. In Departamento Valle del Cauca, whose principal city is Cali, the ARC Pacific Naval Base at Malaga is one of the bases where the U.S. will build its naval port. On the afternoon of November 10, a firefight broke out in the area between a unit of the Revolutionary Armed Forces of Colombia (FARC) and troops allied with the Bogotá government. Nine Bogotá troops were killed and three wounded. There was no report of FARC casualties. This morning, November 12, the army announced a movement of 2,500 troops to the area. They claim that FARC killed three women and a child as well as nine soldiers.

Also today, Uribe claimed that Venezuela had declared war on Colombia! A check with Venezuelan and international television sources produced no confirmation of such a declaration; perhaps it was just a figure of speech on Uribe’s part.

The army also announced the capture of 19 FARC members in the departmentos of Santander, Antioquia, and Meta. Such announcements are an almost daily occurrence. 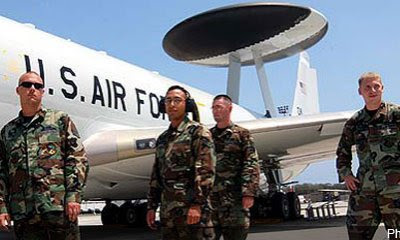 Palanquero is already one of the major air fields in Colombia. The US is spending $46,000,000ºº right this minute to develop it as a fully functioning 135,000 square meter airfield with runways 10,000 feet in length. It will be administered by the U.S. Southern Command. The Colombian Air Force (COLAF) will base high tech communications intercept airplanes there, paid for, of course, by U.S. taxpayers.

3 Responses to U.S.-Colombia Treaty : Yanks Prepare to Party Down