U.S. Military to GI’s in Afghanistan : ‘Hunt People for Jesus’ 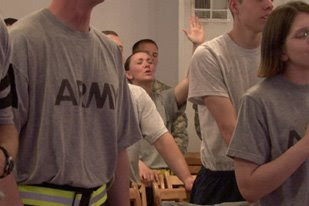 Evangelical Christian soldiers praying at Bagram Air Force Base in Afghanistan. Photo from Al Jazeera.
Military officials at Bagram are caught on tape urging U.S. soldiers to evangelize in the Muslim country.

U.S. Soldiers in Afghanistan are told to ‘hunt people for Jesus… so we get them into the kingdom.

New video evidence has surfaced showing that US military forces in Afghanistan have been instructed by the military’s top chaplain in the country to “hunt people for Jesus” as they spread Christianity to the overwhelmingly Muslim population. Soldiers also have imported bibles translated into Pashto and Dari, the two dominant languages of Afghanistan. What’s more, the center of this evangelical operation is at the huge US base at Bagram, one of the main sites used by the US military to torture and indefinitely detain prisoners.

In a video obtained by Al Jazeera and broadcast Monday [see video below], Lieutenant-Colonel Gary Hensley, the chief of the US military chaplains in Afghanistan, is seen telling soldiers that as followers of Jesus Christ, they all have a responsibility “to be witnesses for him.”

“The special forces guys – they hunt men basically. We do the same things as Christians, we hunt people for Jesus. We do, we hunt them down,” he says.

“Get the hound of heaven after them, so we get them into the kingdom. That’s what we do, that’s our business.”

The translated Bibles appear to be the New Testament. According to Al Jazeera, US soldiers “had them specially printed and shipped to Afghanistan.” On the tape, one soldier describes how his church in the US helped raise money for the bibles. Al Jazeera reports that “What these soldiers have been doing may well be in direct violation of the US Constitution, their professional codes and the regulations in place for all forces in Afghanistan.” The US military officially forbids “proselytising of any religion, faith or practice.” But, as Al Jazeera reports:

[T]he chaplains appear to have found a way around the regulation known as General Order Number One.

“Do we know what it means to proselytise?” Captain Emmit Furner, a military chaplain, says to the gathering.

“It is General Order Number One,” an unidentified soldier replies.

But Watt says “you can’t proselytise but you can give gifts.”

Trying to convert Muslims to any other faith is a crime in Afghanistan. The fact that the video footage is being broadcast on Al Jazeera guarantees that it will be seen throughout the Muslim world. It is likely to add more credence to the perception that the US is engaging in a war on Islam with neo-crusader forces invading Muslim lands.

Former Afghan prime minister Ahmed Shah Ahmedzai told Al Jazeera there must be a “serious investigation,” saying, “This is very damaging for diplomatic relations between the two counties.” Sayed Aalam Uddin Asser, of the Islamic Front for Peace and Understanding in Kabul, told the network: “It’s a national security issue … our constitution says nothing can take place in Afghanistan against Islam. If people come and propaganda other religions which have no followers in Afghanistan [then] it creates problems for the people, for peace, for stability.”

A US military spokesperson, Major Jennifer Willis, denied that the US military has allowed its soldiers to attempt to convert Afghans and said comments from sermons filmed at Bagram were taken out of context. She said the bibles were never distributed. “That specific case involved a soldier who brought in a donation of translated bibles that were sent to his personal address by his home church. He showed them to the group and the chaplain explained that he cannot distribute them,” she said. “The translated bibles were never distributed as far as we know, because the soldier understood that if he distributed them he would be in violation of general order 1, and he would be subject to punishment.”

The video footage was shot about a year ago by documentary filmmaker Brian Hughes, who is also a former US soldier. “[US soldiers] weren’t talking about learning how to speak Dari or Pashto, by reading the Bible and using that as the tool for language lessons,” Hughes told Al Jazeera. “The only reason they would have these documents there was to distribute them to the Afghan people. And I knew it was wrong, and I knew that filming it … documenting it would be important.”

The broadcast of this video comes just days after a new poll of White Americans found that, in the US, church going Christians are more likely to support the use of torture than other segments of the population. The Pew Research Center poll found: “White evangelical Protestants were the religious group most likely to say torture is often or sometimes justified — more than six in 10 supported it. People unaffiliated with any religious organization were least likely to back it. Only four in 10 of them did.”

This is certainly not the first scandal where US military forces or officials have been caught on tape promoting an evangelical Christian agenda. Perhaps the most high-profile case involved Lieut. Gen. William Boykin, who was a Deputy Undersecretary of Defense for Intelligence under Bush. Boykin was part of Donald Rumsfeld’s inner circle at the Pentagon where he was placed in charge of hunting “high-value targets.” Boykin was one of the key U.S. officials in establishing what critics alleged was death-squad-type activity in Iraq.

In October 2003, Boykin was revealed to have gone on several anti-Muslim rants, in public speeches, many of which he delivered in military uniform. Since January 2002, Boykin had spoken at twenty-three religious-oriented events, wearing his uniform at all but two. Among Boykin’s statements, he said he knew the U.S. would prevail over a Muslim adversary in Somalia because “I knew that my God was bigger than his. I knew that my God was a real God and his was an idol.” Boykin also charged that Islamic radicals want to destroy America “because we’re a Christian nation” that “will never abandon Israel.” Our “spiritual enemy,” Boykin declared, “will only be defeated if we come against them in the name of Jesus.”

As for President Bush, Boykin said, “Why is this man in the White House? The majority of Americans did not vote for him. Why is he there? And I tell you this morning that he’s in the White House because God put him there for a time such as this.” In another speech, Boykin said other countries “have lost their morals, lost their values. But America is still a Christian nation.” He told a church group in Oregon that special operations forces were victorious in Iraq because of their faith in God. “Ladies and gentlemen, I want to impress upon you that the battle that we’re in is a spiritual battle,” he said. “Satan wants to destroy this nation, he wants to destroy us as a nation, and he wants to destroy us as a Christian army.”

U.S. Troops Urged to be ‘Witnesses for Jesus’

Hours after Al Jazeera broadcast footage showing US soldiers being told by the senior military chaplain in Afghanistan to “hunt people for Jesus,” the Pentagon has “confiscated copies of the Bible belonging to Christian US soldiers in Afghanistan,” according to Al Jazeera. (Presumably, the confiscated bibles are the ones translated into Pashto and Dari, which were imported by US soldiers to Afghanistan). “Some of the soldiers who appeared in the video have also been reprimanded, US government officials told Al Jazeera’s James Bays.”

At the Pentagon press briefing today, Admiral Mike Mullen, chairman of the U.S. Joint Chiefs of Staff, said, “It certainly is, from the United States military’s perspective, not our position to ever push any specific kind of religion, period.”

But that is not the only line coming from the military. A US military spokesperson, Col. Greg Julian, told Al Jazeera: “Most of this is taken out of context … this is irresponsible and inappropriate journalism.”

Col. Julian’s words are a bit reminiscent of the comments of then-Defense Secretary Donald Rumsfeld and military spokesman Gen. Mark Kimmitt about Al Jazeera during the siege of Fallujah, Iraq in April 2004 when Al Jazeera was broadcasting live feeds of US bombing raids and Iraqi civilian deaths in the city. Mark Kimmitt declared, “The stations that are showing Americans intentionally killing women and children are not legitimate news sources. That is propaganda, and that is lies.” Donald Rumsfeld echoed those remarks, calling Al Jazeera’s reporting “vicious, inaccurate and inexcusable…. It’s disgraceful what that station is doing.”

2 Responses to U.S. Military to GI’s in Afghanistan : ‘Hunt People for Jesus’