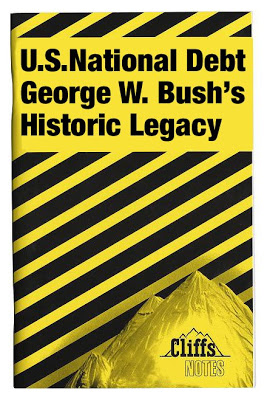 Graphic by Larry Ray / The Rag Blog. With apologies to Cliffs Notes.
Cliffs Notes for Conservatives

As soon as Barack Obama’s hand left the Lincoln bible after taking his oath of office as President of the United States of America, the race was on within the tattered ranks of the Republican party to see who could scream “tax and spend” the loudest.

The same conservatives who uttered not a dissenting word during the past eight years of Republican “spend and spend” now sputter forth about their perceived perilous excesses of President Obama.

It is time for a review of some hard facts and numbers.

Mr. Obama has calmly and deliberately taken charge, faced with inherited wars in Iraq and Afghanistan, the threat of a global financial meltdown, and a laundry list of national and international challenges. And all the while he is pressing ahead and funding promised new programs and change. His Republican detractors, ranting about the national debt, seem to have forgotten George W. Bush’s early months as president.

Mr. Bush inherited a federal budget that had been balanced for three consecutive years and a surplus of $236 billion, the largest surplus in American history. Even sweeter, we were running an on-budget surplus no longer diverting surplus from the Social Security Trust Fund to fund other government programs. This conservative largess, of course, came from the previous Democratic administration.

When Mr. Bush took office, the national debt was $5.727 trillion. By September 2008, the national debt had soared to more than $9.849 trillion, an almost 72 percent increase during Mr. Bush’s two terms. And those are the debt figures before the basically unregulated, free-for-all banking and financial system received Mr. Bush’s $700 billion Wall Street bailout money.

And as President Obama walked into the Oval office, Mr. and Mrs. George W. Bush were closing the deal on their mansion in a Dallas, Texas gated community, leaving the biggest increase in the national debt under any president in U.S history as a going away present to the American people.

Mr. Bush must have erased the collective memory of his record national debt from the minds of the Republican party. With stern faces they attempt daily to paint the accumulated national debt as President Obama’s dangerous “socialist” agenda to send America to the poorhouse. Well, we have already been sent there, and Barack Obama did not do the sending.

Mr. Boehner, Mr. Steele, Mr. Cantor and the rest of the GOP spokespersons du jour should all be given special pocket calculators with a built in factor of $11.3 trillion that is automatically deducted from any figures they use to attack the Obama administration.

The factor could have a new four letter mathematical name, the Debt factor, a word that also works perfectly to describe the Bush presidential legacy.