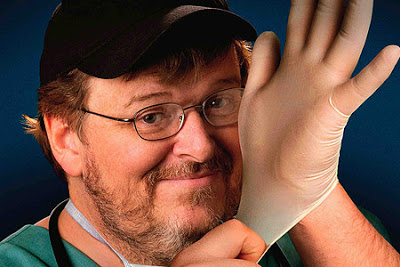 The sad state of American health care was strikingly depicted by Michael Moore in “Sicko”.
US slips down development index

Americans live shorter lives than citizens of almost every other developed nation, according to a report from several US charities.

The report found that the US ranked 42nd in the world for life expectancy despite spending more on health care per person than any other country.

The study looked at US government data on health, education and income.

The report was funded by Oxfam America, the Rockefeller Foundation and the Conrad Hilton Foundation.

The report combines measurements of health, education and income into one measurement – the human development index – based on that used by the United Nations.

The report, Measure of America, identifies significant progress in the US in the last 50 years.

Life expectancy – which averages 78 – has risen eight years since 1960.

Some Americans are living anywhere from 30 to 50 years behind others when it comes to issues we all care about: health, education and standard of living
Sarah Burd-Sharps
Author, Measure of America

Japan has the world’s highest life expectancy – 82.1 years – according to the Organisation for Economic Co-operation and Development (OECD).

The US report identifies obesity and the lack of health insurance for some 47 million Americans as the most significant factors in premature death.

It also provides a snapshot of the inequalities between the richest and the poorest Americans and between different ethnic groups.

“The Measure of America reveals huge gaps among some groups in our country to access opportunity and reach their potential,” said the report’s author, Sarah Burd-Sharps.

“Some Americans are living anywhere from 30 to 50 years behind others when it comes to issues we all care about: health, education and standard of living.

“For example, the state human development index shows that people in last-ranked Mississippi are living 30 years behind those in first-ranked Connecticut.”

African-Americans had a shorter lifespan than the average American did in the late 1970s.

The report further breaks down its findings into the US’s 436 Congressional districts.

The 20th district, around Fresno, California, was ranked last – with people earning one-third as much as residents of the top-ranked US district,- in Manhattan, New York.

The US north-east has the highest overall ranking because people there earn more, are more highly-educated and have the second highest life expectancy.

West Virginia, Louisiana, Arkansas and Alabama are four of the five bottom states on the index. Mississippi is ranked lowest.

* Of the world’s richest nations, the US has the most children (15%) living in poverty;

* Of the OECD nations, the US has the most people in prison – as a percentage and in absolute numbers;

* 25% of 15-year-old students performed at or below the lowest level in an international maths test – worse than Canada, France, Germany and Japan;

* If the US infant mortality rate were equal to first-ranked Sweden, more than 20,000 babies would survive beyond their first year of life.

This entry was posted in RagBlog and tagged Alternative Health Care, Human Development, Poverty, Standard of Living. Bookmark the permalink.