U2 Drummer : ‘Bono’s Friendship With War Criminals Makes Me Cringe’ 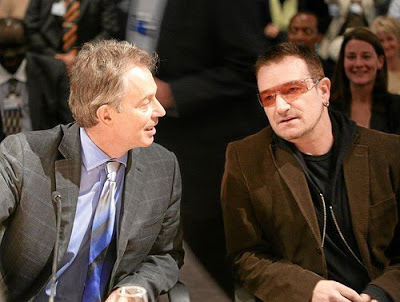 British PM Tony Blair hobs with Bono during the World Economic Forum in Davos, Switzerland, January 26, 2007.
‘The normally reserved musician has launched a stinging attack on his frontman for his involvement with the two world leaders in an interview with music magazine Q.’
By Anne-Marie Walsh

U2 drummer Larry Mullen has admitted he “cringes” when he sees Bono associating with “war criminals” George W Bush and Tony Blair.

The normally reserved musician has launched a stinging attack on his frontman for his involvement with the two world leaders in an interview with music magazine Q.

It is not the first time Mullen has criticised Bono for his campaign work, but this is his most scathing criticism to date. From his appearance at Live Aid and Band Aid in the 1980s, Bono has been involved in numerous charities to raise awareness of crises in Africa, including AIDs.

He praised Mr Bush for increasing aid to Africa and most recently appeared with him during the G8 summit last year. In 2007, he also saluted outgoing British Prime Minister Tony Blair for “doing the things he believed in”, despite the “accusations of a slick PR machine, spin doctoring and the like”.

But his work outside the band has caused a deep rift between Bono and at least one other fellow band member.

In his interview, Mullen suggests the singer’s campaigns have taken their toll on his family life. He admitted that Bono is “prepared to use his weight as a celebrity at great cost to himself and his family, to help other people”, adding: “but, as an outsider looking in, I cringe.”

“Then I see Bono and him as pals and I’m going, ‘I don’t like that’. Do I think George Bush is a war criminal? Probably — but the difference between him and Tony Blair is that Blair is intelligent. So, he has no excuse.”

Six years ago, in an interview on American TV, Mullen said he believed Bono’s political crusades were unsettling the band. He told the ’60 Minutes’ programme that the lead singer’s absence was felt each time he took a break to campaign on issues.

“It does interfere with the band,” he said. “It’s a four-legged table, and with one leg missing, even for short periods of time, the thing becomes a little unstable.”

Bono has also come under attack from critics less close to home, including writer Paul Theroux.

Mr Theroux described Bono, Brad Pitt and Angelina Jolie as “mythomaniacs, people who wish to convince the world of their worth.”

He said he was not complaining about humanitarian aid, disaster relief, AIDS education or affordable drugs.

“Instead, I am speaking of the ‘more money’ platform: the notion that what Africa needs is more prestige projects, volunteer labour and debt relief.”

The U2 singer responded by calling his critics “cranks carping from the sidelines”.

“A lot of them wouldn’t know what to do if they were on the field,” he said.

3 Responses to U2 Drummer : ‘Bono’s Friendship With War Criminals Makes Me Cringe’