Ulysses : The Hip Hop Revolution of the Arab Spring 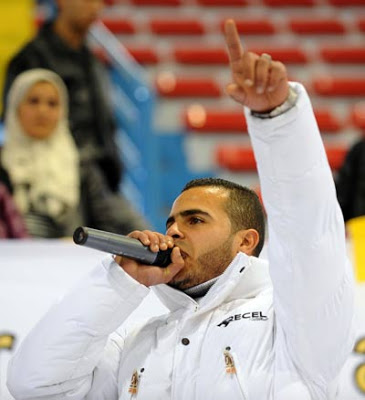 [In the midst of the Arab Spring there is a group of dedicated young hip hop artists who are using their medium to disseminate revolutionary ideas. This piece documents how hip hop has impacted the way young people interact with the revolution in Tunisia, Morocco, Egypt, Libya, and elsewhere.]

Hip hop is a fundamentally subversive genre. It has become a universal medium of social and political expression for young, dissident, and marginalized people everywhere. What Arabic hip hop has given the Arab world is a widely-accessible and unfiltered medium for disseminating revolutionary ideas.

It’s important not to overstate the influence of Arabic hip hop on the Arab uprisings, though. Arabic hip hop is an underground phenomenon. Since there’s no real Arabic hip hop industry to speak of, Arabic-language rap artists must distribute their music online or sign with western labels.

Despite this, the genre’s popularity and influence are growing remarkably fast because Arabic hip hop powerfully speaks to our desire for dignity, human rights, and a brighter future.

The Internet and the revolution

Social media and expanded internet access weren’t the cause of the Arab uprisings, but they were crucial to their success.

In 2008, massive protests erupted in the southern Tunisian mining town of Redeyef. For six months, 3,000 police besieged this city of 25,000 people while its citizens bravely demonstrated against corruption and chronic unemployment. Because of the state’s violent repression and its stranglehold on media outlets, the protests failed to spread or gain much attention.

Without developed social networks, the thousands of Redeyef’s citizens who obtained protest footage on CDs or computers had no way to let most Tunisians see it. Fahem Boukaddous, a Tunisian journalist who covered the protests, said, “In 2008, Facebook wasn’t at all well-known, especially in poor cities like here.”

In fact, fewer than 30,000 Tunisians were on Facebook when Redeyef exploded in early 2008.

By the end of 2010, Tunisia’s Internet landscape had been transformed. A January 2011 survey found that Tunisia, a country of 10 million, had 1.97 million Facebook users — 18.6% of Tunisia’s entire population and 54.73% of its online population. By this time, Facebook, along with YouTube and sites such as ReverbNation.com, had become the primary medium for distributing Arabic hip hop.

The Internet’s great gift was that it allowed Tunisians and Arabs, for the first time, to effortlessly share their testimony with each other and with the world.

The aura of hip hop

You can legally download almost any revolutionary Arabic hip hop song for free online — that’s exactly what the artists want. As Mark Levine argues, the uncommodified, do-it-yourself character of this hip hop gives it “the aura” that pre-modernity artistic expression enjoyed. This aura, which “previously had given art such aesthetic, and thus social power by highlighting its singularity, irreplaceable and incommensurable value, was for all practical purposes lost” because of the commercialization of the music industry in the twentieth century.

That’s a really complicated way of saying, “Arabic rap is awesome because its rappers aren’t sell-outs.” Commercialization inevitably leads artists to compromise their politics and their message because every music industry is run by rich, powerful people with a huge investment in the status quo.

The Arabic music industry is especially reactionary and patriarchal. “A lot of the music that comes from here, from the region, is pop,” El Général told Lauren Bohn. “It’s all the same and it isn’t art. They’re making harmful inroads into the arts, actually. There’s no engagement. And music without engagement isn’t art.”

Many Arab artists, including El Deeb and Arabian Knightz, have lamented how foreign media supports and promotes Arabic hip hop more than Arabic media does. The reason is simple. Arabic hip hop scares Arab elites because it’s profoundly subversive, while western elites like Arabic hip hop because it makes the revolutions seem non-radical and friendly to the west.

To understand Arabic hip hop, though, you need to approach it on its own terms, not on yours.

El Général and the Tunisian Revolution

On November 7, 2010, Hamada Ben-Amor, a young rapper from Sfax known as “El Général,” posted this jeremiad against the regime of Tunisian dictator Zine el-Abidine Ben Ali on Youtube and Facebook. (Full lyrics here.)

On December 17, Mohamed Bouazizi’s self-immolation sparked pro-democracy demonstrations across Tunisia. The world media hardly noticed. Then, on January 6, state security, allegedly acting on the orders of the president himself, arrested El Général. The arrest brought Tunisia far more international attention than it had witnessed on any single day since the trouble began.

For a few days, the voice of a 21 year-old rapper from Sfax was more powerful than the voice of the dictator of Tunisia. The regime released El Général a few days later. It didn’t matter. On January 14, 2011, Ben Ali fled to Saudi Arabia after the Tunisian military refused to guarantee his safety. In his place, a caretaker government promising a transition to full democracy came to power.

There’s a delicious irony in Tunisian rap music’s role in the events that led to Ben Ali’s overthrow. In 2006, the Tunisian and French governments sponsored a (bad) film that promotes hip hop as a counter to jihadi ideology . Much as it used “state feminism” to co-opt women’s movements, the regime appropriated Tunisian hip hop for its own ends.

The government controlled song lyrics, concert licenses, CD distribution, and all TV and radio access. Tunisia’s rappers had a choice: make apolitical, commercial rap and have the chance to earn a livelihood or go underground, rap freely, and face poverty, imprisonment, torture, and death. Most Tunisian rappers chose the first option.

El Général was interviewed on Al-Jazeera and named one of TIME’s 100 most influential people in the world. Demonstrators in Cairo’s Tahrir Square and Bahrain’s capital of  Manama chanted “Rais lebled” in the street. Today, the only person who’s a bigger icon of the Tunisian Revolution is Mohamed Bouazizi himself. As El Général told Lauren Bohn, “Arab rap is finally on the map, and we’re blowing up the world.”

Algeria and Morocco: the cradle of Arabic hip hop

Francophone hip-hop’s influence helped make Morocco and Algeria the first real Arabic hip hop scenes in the early 1990s. Lotfi Double Kanon, Arabic hop hop’s most influential MC, hails from Algeria. Born in 1974 into a modest family from Annaba, Lotfi started his rap career while earning his Master’s in engineering in the late 1990s during the height of Algeria’s horrific civil war.

His music attacks le pouvoir (“the elite”) and speaks for the voiceless youth of his dispossessed generation. The Algerian government hates him, of course, but it generally leaves him unhindered. (Full lyrics here.)

The Moroccan rap scene’s size, longevity, commercial sophistication, and Arabic dialect set it apart from other Arab rap scenes to a certain degree. Moroccan hip hop is deeply commercialized and closely integrated into the Arabic music industry, which reflects both the genuine success of Moroccan hip hop and the compromises with power that it’s made.

Moroccan hip hop gets numbers of hits on YouTube — as many as several million per video — that dwarf those of other Arabic hip hop scenes. Yet, as Zahir Rahman pointed out on Twitter, “The problem with Moroccan hip hop is that the big namers get co-opted by the government.”

Fnaire’s “Mat9drsh bladi” was used as a national unity theme song by the Moroccan government. Don Bigg is a reactionary who performed at the outlandish, government-sponsored Mawazine festival that outraged February 20 activists.

At the same time, Morocco has some of the bravest revolutionary hip hop anywhere. The pro-February 20 rapper L7a9ed (Haked) has been imprisoned by the government on trumped-up assault charges. Soultana, a young MC from Rabat, is an incredibly brave woman — just check out her video “Sawt Nssa” and you’ll see what I mean.

Lebanese hip hop started taking shape in the mid-1990s. Artists such as Rayess Bek, Fareeq el Atrach, and Malikah 961 make up a vibrant Lebanese scene today. Malikah is an absolutely fearless MC who vies with Palestine’s Shadia Mansour for the title of “The First Lady of Arabic Hip Hop.” Like Soultana, Malikah infuses her music with revolutionary themes and powerful advocacy for Arab women. Here’s “Ya imra2a” (“O woman!”) (Full lyrics here.)

The Saudi rapper Qusai, the first host of MTV’s Hip HopNa, makes some conscious hip hop but nonetheless fully represents the Arab music industry and the powerful more generally (he made a video for, of all things, Mastercard). Fredwreck, the other host, is an American who produces for Snoop Dogg and other stalwarts of the American music industry.

By working with people like them, Malikah has become successful and famous. The industry, however, will use every tool it has to dilute the politically and socially revolutionary message of her music. In the rap game, materialism is the enemy of the subversive. Malikah needs to be very careful about this.

In this video, she shows AFP her new Mercedes and says, “This is my car. I’ve dreamed of buying a car for years. You understand? It must have class because I am Malikah and Malikah must have the car she deserves.”

Malikah is a true revolutionary, but she will always have to fight the industry ferociously to maintain her authenticity and her artistic freedom. She’s such a strong woman, though, that I think she’s up to the challenge.

Ibn Thabit and the Libyan Revolution

Although he’s largely unknown in the western press, Ibn Thabit, Libya’s leading rapper, enjoys almost universal recognition among the Libyan diaspora and a huge fan base in Libya itself. His pseudonym comes from Hassan Ibn Thabit, the favorite poet of the Prophet Muhammad.

Over the past four years, Ibn Thabit routinely took astonishing risks by releasing his music while moving between living abroad and in Libya itself. His obsession with toppling Gaddafi and his indifference towards fame, money, or other topics give his music as pure a revolutionary ethos as you’ll find anywhere. This song came out just days before the Libyan Revolution began. (Full lyrics here.)

His songs tear down Gaddafi’s regime, celebrate Libya’s society, culture, and people, and explore how to build a new, free Libya. He promotes reconciliation by giving shout-outs to all elements of Libyan society and by arguing that vigilantism and revenge killing have no place in the new Libya.

A few weeks ago, Ibn Thabit shocked his fans by announcing his retirement from hip hop (video here). Now, he says, he wants to help build a new Libya in a new way.

In Mubarak’s Egypt, unlike Libya, Syria, or Bahrain (check out “Athletes of Bahrain“), artists could manage to attach their real names to revolutionary forms of expression while keeping themselves out of jail. Artists such as El Deeb, Ramy Donjewan, Zap Tharwat, MC Amin, Revolutionary Records), and Ismailia Soldiers created a vibrant revolutionary underground scene in the years preceding the revolution. Arabian Knightz even managed to get a little play on Egyptian satellite channels.

By being a direct forum for revolutionary expression, Egyptian Hip hop played a small but key role in the decade-long buildup of the movements, organizational infrastructure, and political consciousness that led to the January 25 Revolution. Now, as the massive recent anti-SCAF protests demonstrate, hip hop is an established part of Egypt’s political discourse. (Full lyrics here.)

[Ulysses examines social and political change in the Middle East and North Africa through the lens of Arabic hip hop. Ulysses blogs at Revolutionary Arab Rap. This article was published by openDemocracy under a Creative Commons License. It was distributed by Portside. Go to the original posting for dozens of source and background links and links to additional videos.]

1 Response to Ulysses : The Hip Hop Revolution of the Arab Spring