UN Ambassador Wolff: Just Making Sure We All Understood the Hypocrisy 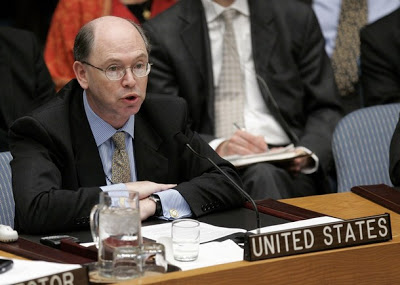 UNITED NATIONS — U.S. and Russian envoys exchanged sharp words on Thursday over Iraq and Kosovo at a U.N. Security Council meeting on Georgia, at which Russia found little support for its actions in the Caucasus.

It was the council’s sixth emergency session on the crisis in the former Soviet republic, which Russia invaded earlier this month to thwart an attempt by Tbilisi to restore its control over a breakaway region.

Like the five previous council meetings on the brief war this month between Russia and Georgia, the 15-nation body passed no resolution or statement due to Russia’s veto powers.

The meeting was characterized by Cold War-style exchanges of insults between the U.S. and Russian U.N. ambassadors that reflected the growing tensions between the two countries.

U.S. Deputy Ambassador Alejandro Wolff told the meeting it was a violation of the U.N. charter for member states to use force against others, or threaten to use it, and suggested that Moscow’s claims to be protecting Russian citizens in Georgia’s South Ossetia region were a sham.

“I would like to ask the distinguished representative of the United States — weapons of mass destruction. Have you found them yet in Iraq or are you still looking for them?”

The United States justified the invasion of Iraq by saying it had to find and secure what it said were caches of nuclear, chemical and biological weapons hidden by then-President Saddam Hussein. The weapons were never found.

Wolff accused Churkin of making false comparisons. “I’m not a psychologist and I don’t know what brought on the free association we heard from Ambassador Churkin,” he said.

“There were divisions on the Iraq war,” he said. “Those are well known. We thought we had overcome them. Apparently there are still some lingering frustrations. But there is no territorial ambition or desire to dismember Iraq.”

Churkin also cited NATO’s 1999 bombing campaign against Serbia to force it to withdraw from its Kosovo region. He likened the declaration of independence by South Ossetia and another Georgian separatist enclave, Abkhazia, to Kosovo’s Western-backed secession from Serbia in February 2008.

Sawers said NATO’s 1999 military intervention in Kosovo was multilateral, was intended to prevent an impending humanitarian crisis and took place after all peaceful avenues had been exhausted. He added that Kosovo’s declaration of independence followed nine years of U.N. administration.

The Security Council has so far refused to accept a request from envoys of South Ossetia and Abkhazia, which Russia recognized this week as independent states, to address it.

Only South African Ambassador Dumisani Kumalo supported Russia on the issue of inviting the separatist envoys, who have applied for U.S. visas in Moscow using Russian passports, to speak before the council.

The Chinese delegation, Russia’s traditional ally on the council, did not speak, which Western diplomats said was a defeat for Russia and proved that Moscow enjoyed virtually no support on the council.

This entry was posted in RagBlog and tagged Russia, U.S. Government, United Nations. Bookmark the permalink.