UN Resolution 242: Sowing the Seeds of Future Catastrophe in 1967 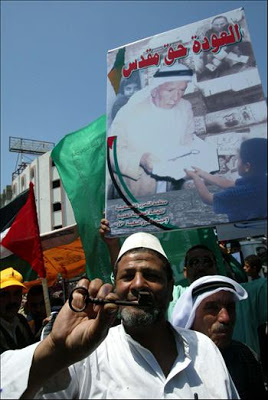 A senior Palestinian holds an old key as he marches during a rally marking the Al-Nakba (Catastrophe) Day in Gaza City.
Robert Fisk’s World: One missing word sowed the seeds of catastrophe
By Robert Fisk / December 20, 2008

A nit-picker this week. And given the fact that we’re all remembering human rights, the Palestinians come to mind since they have precious few of them, and the Israelis because they have the luxury of a lot of them.

And Lord Blair, since he’ll be communing with God next week, might also reflect that he still – to his shame – hasn’t visited Gaza. But the nit-picking has got to be our old friend United Nations Security Council Resolution 242. This, you’ll recall, was supposed to be the resolution that would guide all future peace efforts in the Middle East; Oslo was supposed to have been founded on it and all sorts of other processes and summits and road maps.

It was passed in November 1967, after Israel had occupied Gaza, the West Bank, East Jerusalem, the Sinai and Golan, and it emphasises “the inadmissibility of the acquisition of territory by war” and calls for “withdrawal of Israeli armed forces from territories occupied in the recent conflict”.

Readers who know the problem here will be joined by those who will immediately pick it up. The Israelis say that they are not required to withdraw from all the territories – because the word “all” is missing and since the definite article “the” is missing before the word “territories”, its up to Israel to decide which bits of the occupied territories it gives up and which bits it keeps.

Hence Israel can say it gave up Sinai in accordance with 242 but is going to keep East Jerusalem and much of the West Bank for its settlers. Golan depends on negotiations with Syria. And Gaza? Well, 242 doesn’t say anything about imprisoning one and a half million civilians because they voted for the wrong people. No one in 1967 dreamed that the Israeli-Arab conflict would still be in ferocious progress 41 years later. And as an Independent reader pointed out a couple of years ago, the Security Council clearly never intended the absence of a definite article to give Israel an excuse to stay in the West Bank. Alas, our reader was wrong.

I’ve been going back through my files on 242 and discovered a most elucidating paper by John McHugo, who was a visiting fellow at the Scottish Centre for International Law at Edinburgh University. He points out that pro-Israeli lawyers have been saying for some years that “Resolution 242 unanimously called for withdrawal from ‘territories’ rather than withdrawal from ‘all the territories’. Its choice of words was deliberate… they signify that withdrawal if required from some but not all the territories”.

McHugo is, so far as I know, the only man to re-examine the actual UN debates on 242 and they make very unhappy reading. The French and Spanish versions of the text actually use the definite article. But the Brits – apparently following a bit of strong-arm tactics from the Americans – did not use “the”. Lord Caradon, our man at the UN, insisted on putting in the phrase about the “inadmissability of the acquisition of territory by war” in order to stop the Israelis claiming that they could cherry-pick which lands to return and which to hand on to. Britain accepted Jordan’s rule over the West Back – the PLO were still shunned as super-terrorists at the time – but it did no good. Abba Eban, Israel’s man on the East River, did his best to persuade Caradon to delete both “the” and the bit about the inadmissability of territory through war. He won the first battle, but not the second.

That great American statesman George Ball was to recount how, when the Arabs negotiated over 242 in early November of 1967 – at the Waldorf Astoria (these guys knew how to pick the swankiest hotels for political betrayal) – the US ambassador to the UN, Arthur Goldberg, told King Hussein that America “could not guarantee that everything would be returned by Israel”. The Arabs distrusted Goldberg because he was known to be pro-Zionist, but Hussein was much comforted when US Secretary of State Dean Rusk assured him in Washington that the US “did not approve of Israeli retention of the West Bank”. Hussein was further encouraged when he met President Johnson who told him that Israeli withdrawal might take place in “six months”. Goldberg further boosted his confidence. “Don’t worry. They’re on board,” he said of the Israelis. Ho ho.

It’s intriguing to note that several other nations at the UN were troubled by the absence of “the”. The Indian delegate, for example, pointed out that the resolution referred to “all the territories – I repeat all the territories – occupied by Israel…” while the Soviet Union (which knew all about occupying other people’s countries) stated that “we understand the decision to mean the withdrawal of Israeli forces from all, and we repeat, all territories belonging to Arab states and seized by Israel…”. President Johnson rebuffed the Soviets and bluntly refused to put the word “all” in the resolution. Bulgaria, not surprisingly, said much the same as the Soviets. Brazil expressed reservations – rightly so – about “the clarity of the wording”. The Argentinians “would have preferred a clearer text”. In other words, the future tragedy was spotted at the time. But we did nothing. The Americans had stitched it up and the Brits went along with it. The Arabs were not happy but foolishly – and typically – relied on Caradon’s assurances that “all” the territories was what 242 meant, even if it didn’t say so. Israel still fought hard to get rid of the “inadmissability” bit, even when it had got “the” out.

Ye gods! Talk about sewing the seeds of future catastrophe. Well, Colin Powell, when he was George W Bush’s secretary of state, gutlessly told US diplomats to call the West Bank “disputed” rather than “occupied” – which suited the Israelis just fine although, as McHugo pointed out, the Israelis might like to consider what would happen if the Arabs talked about those bits of Israel which were not included in the original UN partition plan as “disputed” as well. Besides, George W’s infamous letter to Ariel Sharon, saying he could, in effect, keep large bits of the West Bank, set the seal on Johnson’s deception.

McHugo mischievously adds that a mandatory warning in a city that says “dogs must be kept on the lead near ponds in the park” clearly means that “all” dogs and “all” ponds are intended. These days, of course, we use walls to keep dogs out. Palestinians, too.