Unboxed: Moving from Curiousity to Wonder 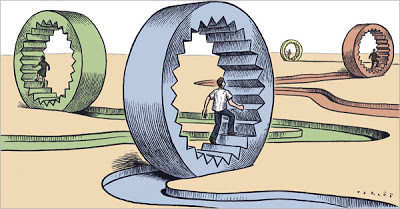 Can You Become a Creature of New Habits?
By Janet Rae-Dupree

HABITS are a funny thing. We reach for them mindlessly, setting our brains on auto-pilot and relaxing into the unconscious comfort of familiar routine. “Not choice, but habit rules the unreflecting herd,” William Wordsworth said in the 19th century. In the ever-changing 21st century, even the word “habit” carries a negative connotation.

So it seems antithetical to talk about habits in the same context as creativity and innovation. But brain researchers have discovered that when we consciously develop new habits, we create parallel synaptic paths, and even entirely new brain cells, that can jump our trains of thought onto new, innovative tracks.

Rather than dismissing ourselves as unchangeable creatures of habit, we can instead direct our own change by consciously developing new habits. In fact, the more new things we try — the more we step outside our comfort zone — the more inherently creative we become, both in the workplace and in our personal lives.

But don’t bother trying to kill off old habits; once those ruts of procedure are worn into the hippocampus, they’re there to stay. Instead, the new habits we deliberately ingrain into ourselves create parallel pathways that can bypass those old roads.

“The first thing needed for innovation is a fascination with wonder,” says Dawna Markova, author of “The Open Mind” and an executive change consultant for Professional Thinking Partners. “But we are taught instead to ‘decide,’ just as our president calls himself ‘the Decider.’ ” She adds, however, that “to decide is to kill off all possibilities but one. A good innovational thinker is always exploring the many other possibilities.”

All of us work through problems in ways of which we’re unaware, she says. Researchers in the late 1960s discovered that humans are born with the capacity to approach challenges in four primary ways: analytically, procedurally, relationally (or collaboratively) and innovatively. At puberty, however, the brain shuts down half of that capacity, preserving only those modes of thought that have seemed most valuable during the first decade or so of life.

This entry was posted in RagBlog and tagged American Society, Philosophy. Bookmark the permalink.