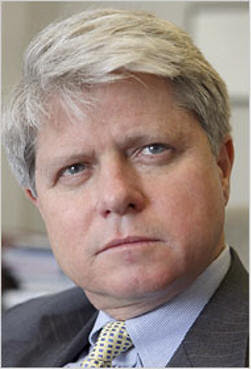 Randel K. Johnson, vice president of that esteemed group, the U.S. Chamber of Commerce, recently revealed a corporate-squelched truth in a slip of the tongue.

During a debate on May 15 with Stewart Acuff of the AFL-CIO about the Employee Free Choice Act, Johnson admitted – finally – that the act preserves secret ballot elections for unions. The act would allow workers – rather than employers – to decide whether to form a union by conducting a secret ballot election or by collecting signed membership cards from a majority of workers.

Incredibly, for as much as unearned-bonus-grubbing-CEOs have lied about secret ballots in their relentless campaign against the Employee Free Choice Act, that was not Johnson’s revelation.

No, here’s what he disclosed: If the act passes, he said, “It would be a rare union that would decide to risk a normal secret ballot election.”

The Chamber and big corporations like Wal-Mart are intent on defeating the act because it would remove from employers the power to force workers to conduct secret ballot elections. It would strip from employers that ability to generate risk, to defeat unions, and thus to further shrink wages and the American middle class.

A Cornell University professor, Kate Bronfenbrenner, who has researched labor issues for a quarter century, issued a new study last week that clearly illustrates the risk of secret ballot elections and how employers have labored long and hard to increase that risk in recent years. It’s called, “No Holds Barred: The Intensification of Employer Opposition to Organization.”

Among the tactics she documents employers using in the weeks before the “secret ballot” election to thwart unionization are firing of union organizers, threats to close the plant or cut wages and benefits, and forcing workers to meet one-on-one with supervisors who intimidate and interrogate them to determine whether they support the union.

Bronfenbrenner concluded, “This combination of threats, interrogation, surveillance, and harassment has ensured that there is no such thing as a democratic ‘secret ballot’ in the NLRB (National Labor Relations Board) certification election process. The progression of actions the employer has taken can ensure that the employer knows exactly which way every worker plans to vote long before the election takes place.”

Her study showed employers implementing these tactics more frequently than in the past. When she compared organizing campaigns in this five-year period to those in the studies over the previous 20 years, she discovered two disconcerting facts: the cases in which employers used 10 of these threatening techniques in the run-up to elections more than doubled. And employers focused much more on coercive and punitive methods rather than positive procedures such as unscheduled raises and promotions.

Not surprisingly, she also found that as employers exploited harsher tactics and intensified their attacks in the weeks before “secret balloting,” the union was more likely to lose. And, conversely, she found that in campaigns where public sector workers tried organizing and government agencies refrained from coercive and illegal tactics, the union was significantly more likely to win.

If it weren’t so easy for employers to create risk for workers, millions more could get the union protection they want. Surveys show an increasing number of American workers desire a union. In the mid 1990s, it was 40 percent. Now it’s 53 percent. Yet only 12.4 percent of American workers have that protection – and the better wages and benefits that go with it.

Bronfenbrenner addressed this issue in her report: “Our findings suggest that the aspirations for representation are being thwarted by a coercive and punitive climate for organizing that goes unrestrained due to a fundamentally flawed regulatory regime that neither protects their rights nor provides any disincentive for employers to continue disregarding the law.”

She continues: “Unless serious labor law reform with real penalties is enacted, only a fraction of the workers who seek representation under the National Labor Relations Act will be successful.”

That reform is the Employee Free Choice Act, and there’s the point of Johnson’s use of the word risk. The Chamber of Commerce intends to kill the act and leave risk fully on the shoulders of workers. As Bronfenbrenner showed, that would mean fewer will be unionized. Middle class wages and benefits would continue to decline.

It is time for American workers to stop bearing all of the risk. They’re working for less and bailing out the very people who are obstructing their ability to fairly bargain for more.

During the October call, Bernie Marcus, co-founder of Home Depot, said he should be on a 350-foot boat in the Mediterranean, but he thought fighting the Employee Free Choice Act was more important because, “This is the demise of a civilization. . . This is how a civilization disappears.”

Yes, the Employee Free Choice Act could contribute ever so slightly to dissipation of a decadent class. Unionization is how the middle class re-emerges. America could do without a few filthy-rich boys lolling on yachts in the Mediterranean. At the heart of America, however, must be a strong and broad middle class.

Source / Blog for Our Future

This entry was posted in RagBlog and tagged Chamber of Commerce, Corporate Power, Labor Unions. Bookmark the permalink.

2 Responses to Unions: The ‘Risk’ of Secret Ballot Elections