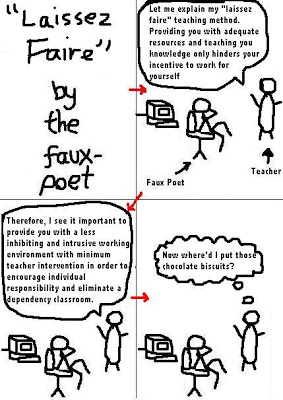 Source.
Laissez-Faire Capitalism Should Be as Dead as Soviet Communism
By Arianna Huffington / December 22, 2008

The collapse of Communism as a political system sounded the death knell for Marxism as an ideology. But while laissez-faire capitalism has been a monumental failure in practice, and soundly defeated at the polls, the ideology is still alive and kicking.

The only place you can find an American Marxist these days is teaching a college linguistic theory class. But you can find all manner of free market fundamentalists still on the Senate floor or in Governor’s mansions or showing up on TV trying to peddle the deregulation snake oil.

Take Sen. John Ensign, chairman of the National Republican Senatorial Committee, who went on Face the Nation and, with a straight face, said of the economic meltdown: “Unfortunately, it was allowed to be portrayed that this was a result of deregulation, when in fact it was a result of overregulation.”

Or Gov. Mark Sanford, who told Joe Scarborough he was against bailing out the auto industry because it would “threaten the very market-based system that has created the wealth that this country has enjoyed.”

It’s time to drive the final nail into the coffin of laissez-faire capitalism by treating it like the discredited ideology it inarguably is. If not, the Dr. Frankensteins of the right will surely try to revive the monster and send it marauding through our economy once again.

We’ve only just begun to bury the financially dead, and the free market fundamentalists are already looking to deflect the blame.

In a comprehensive piece on what led to the mortgage crisis and the subsequent financial meltdown, the New York Times shows how the Bush administration’s devotion to unregulated markets was a primary cause of our economy to ruin. But the otherwise fascinating piece puts too much focus on the “mistakes” the Bush team made by not paying attention to the warning signs popping up all around them.

“There is no question we did not recognize the severity of the problems,” claimed Al Hubbard, Bush’s former chief economic adviser. “Had we, we would have attacked them.”

But the mistake wasn’t in not recognizing the “severity of the problems” — the mistake was the ideology that led to the problems. Communism didn’t fail because Soviet leaders didn’t execute it well enough. Same with free market fundamentalism. In fact, Bush and his team did a bang-up job executing a defective theory. The problem wasn’t just the bathwater; the baby itself is rotten to the core.

William Seidman, the longtime GOP economic advisor who oversaw the S&L bailout in 1991, cuts to the chase: “This administration made decisions that allowed the free market to operate as a barroom brawl instead of a prize fight. To make the market work well, you have to have a lot of rules.”

Even Alan Greenspan, whose owl-eyed visage would adorn a Mount Rushmore of unregulated capitalists, has begun to see the light, telling a House committee in October that he “made a mistake in presuming that the self-interests of organizations, specifically banks and others, were such that they were best capable of protecting their own shareholders and their equity in the firms.”

But most Republicans are still refusing to see what’s right in front of them. Especially Bush, our CEO president, who lays the blame not on the failures of the marketplace but on past administrations and corporate greed. “Wall Street got drunk,” he says. Maybe so, but who made the last 8 years Happy Hour, and kept serving up the drinks?

Last week, Ben Smith reported that the GOP was launching “a new, in-house think tank aimed at reviving the party’s policy heft.” In a private memo explaining the think tank, RNC chairman Mike Duncan wrote: “We must show how our ideology can be applied to solve problems.” But, of course, it’s that very ideology that’s causing the problems. It’s like the old horror movie cliché: “We’ve traced the call — it’s coming from inside the house!”

We’ve got to do everything we can to make sure there will be no sequels to this political horror. The blame shifters cannot be allowed to make their case without the truth being pointed out at every turn. It’s time to relegate free market fundamentalists to the same standing as Marxist ideologues: intellectual curiosities occasionally trotted out as relics of a failed philosophy.

This entry was posted in RagBlog and tagged Bush Administration, Capitalism, Economic Crisis. Bookmark the permalink.