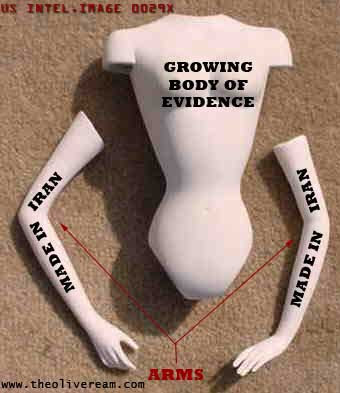 US claims on Iranian arms proove bogus
By Gareth Porter / May 14, 2008

WASHINGTON — Early this month, the George W. Bush administration’s plan to create a new crescendo of accusations against Iran for allegedly smuggling arms to Shiite militias in Iraq encountered not just one but two setbacks.

The government of Prime Minister Nouri al-Maliki refused to endorse U.S. charges of Iranian involvement in arms smuggling to the Mahdi Army, and a plan to show off a huge collection of Iranian arms captured in and around Karbala had to be called off after it was discovered that none of the arms were of Iranian origin.

The news media’s failure to report that the arms captured from Shiite militiamen in Karbala did not include a single Iranian weapon shielded the U.S. military from a much bigger blow to its anti-Iran strategy.

The Bush administration and top Iraq commander Gen. David Petraeus had plotted a sequence of events that would build domestic U.S. political support for a possible strike against Iran over its “meddling” in Iraq and especially its alleged export of arms to Shiite militias.

The plan was keyed to a briefing document to be prepared by Petraeus on the alleged Iranian role in arming and training Shiite militias that would be surfaced publicly after the al-Maliki government had endorsed it and it used to accuse Iran publicly.

Chairman of the Joint Chiefs of Staff, Adm. Mike Mullen, told reporters on Apr. 25 that Petraeus was preparing a briefing to be given “in the next couple of weeks” that would provide detailed evidence of “just how far Iran is reaching into Iraq to foment instability”. The centrepiece of the Petraeus document, completed in late April, was the claim that arms captured in Basra bore 2008 manufacture dates on them.

U.S. officials also planned to display Iranian weapons captured in both Basra and Karbala to reporters. That sequence of media events would fill the airwaves with spectacular news framing Iran as the culprit in Iraq for several days, aimed at breaking down Congressional and public resistance to the idea that Iranian bases supporting the meddling would have to be attacked.

But events in Iraq diverged from the plan. On May 4, after an Iraqi delegation had returned from meetings in Iran, al-Maliki’s spokesman, Ali al-Dabbagh, said in a news conference that al-Maliki was forming his own Cabinet committee to investigate the U.S. claims. “We want to find tangible information and not information based on speculation,” he said.

Another adviser to al-Maliki, Haider Abadi, told the Los Angeles Times’ Alexandra Zavis that Iranian officials had given the delegation evidence disproving the charges. “For us to be impartial, we have to investigate,” Abadi said.

Al-Dabbagh made it clear that the government considered the U.S. evidence of Iranian government arms smuggling insufficient. “The proof we have is weapons which are shown to have been made in Iran,” al-Dabbagh said in a separate interview with Reuters. “We want to trace back how they reached [Iraq], who is using them, where are they getting it.”

Senior U.S. military officials were clearly furious with al-Maliki for backtracking on the issue. “We were blindsided by this,” one of them told Zavis.

Then the Bush administration’s campaign on Iranian arms encountered another serious problem. The Iraqi commander in Karbala had announced on May 3 that he had captured a large quantity of Iranian arms in and around that city.

Earlier the U.S. military had said that it was up to the Iraqi government to display captured Iranian weapons, but now an Iraqi commander was eager to show off such weapons. Petraeus’ staff alerted U.S. media to a major news event in which the captured Iranian arms in Karbala would be displayed and then destroyed.

But when U.S. munitions experts went to Karbala to see the alleged cache of Iranian weapons, they found nothing that they could credibly link to Iran.

The U.S. command had to inform reporters that the event had been cancelled, explaining that it had all been a “misunderstanding”. In his press briefing May 7, Brig. Gen. Kevin Bergner gave some details of the captured weapons in Karbala but refrained from charging any Iranian role.

The cancellation of the planned display was a significant story, in light of the well-known intention of the U.S. command to convict Iran on the arms smuggling charge. Nevertheless, it went completely unreported in the world’s news media.

A report on the Los Angeles Times’ Blog “Babylon & Beyond” by Baghdad correspondent Tina Susman was the only small crack in the media blackout. The story was not carried in the Times itself, however.

The real significance of the captured weapons collected in Karbala was not the obvious U.S. political embarrassment over an Iraqi claim of captured Iranian arms that turned out to be false. It was the deeper implication of the arms that were captured.

Karbala is one of Iraq’s eight largest cities, and it has long been the focus of major fighting between the Mahdi Army and its Shiite foes. Moqtada al-Sadr declared his ceasefire last August after a major battle there, and fighting had resumed there with the government operation in Basra in March. Thousands of Mahdi Army fighters have fought there over the past year.

The official list of weapons captured in Karbala includes nine mortars, four anti-aircraft missiles, 45, RPGs and 800 RPG missiles and 570 roadside explosive devices. The failure to find a single item of Iranian origin among these heavier weapons, despite the deeply entrenched Mahdi Army presence over many months, suggests that the dependence of the Mahdi Army on arms manufactured in Iran is actually quite insignificant.

The Karbala weapons cache also raises new questions about the official U.S. narrative about the Shiite militia’s use of explosively formed penetrators (EFPs) as an Iranian phenomenon. Among the captured weapons mentioned by Gen. Jawdat were what he called “150 anti-tank bombs”, as distinguished from ordinary roadside explosive devices.

An “anti-tank bomb” is a device that is capable of penetrating armour, which has been introduced to the U.S. public as the EFP. The U.S. claim that Iran was behind their growing use in Iraq was the centrepiece of the Bush administration’s case for an Iranian “proxy war” against the U.S. in early 2007.

Soon after that, however, senior U.S. military officials conceded that EFPs were in fact being manufactured in Iraq itself, although they insisted that EFPs alleged exported by Iran were superior to the home-made version.

The large cache of EFPs in Karbala which are admitted to be non-Iranian in origin underlines the reality that the Mahdi Army procures its EFPs from a variety of sources.

But for the media blackout of the story, the large EFP discovery in Karbala would have further undermined the credibility of the U.S. military’s line on Iran’s export of the EFPs to Iraqi fighters.

Apparently understanding the potential political difficulties that the Karbala EFP find could present, Gen. Bergner omitted any reference to them in his otherwise accurate accounting of the Karbala weapons.

[Gareth Porter is an historian and national security policy analyst. The paperback edition of his latest book, “Perils of Dominance: Imbalance of Power and the Road to War in Vietnam”, was published in 2006.]