US Doesn’t Have a Lock on the Elimination of Freedoms 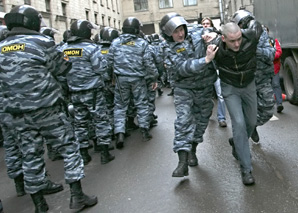 MOSCOW — Russian authorities pulled hundreds of opposition activists off buses and trains and detained them along with scores of others on Saturday ahead of a rare anti-government rally in Moscow, organizers said.

The police action did not prevent more than 2,000 people from gathering in a central square, where leftist and liberal groups demanded that Russian President Vladimir Putin stop what they called Russia’s retreat from democracy.

“In 15 months political power will be changed,” said Mikhail Kasyanov, a former prime minister who is now an opposition leader, referring to the March 2008 presidential election.

“Next year everyone should make a personal decision about what to do with our country, whether we allow these people to continue their illegal undertakings … or we finally make our main goal to build a democratic and socially oriented state,” Kasyanov told demonstrators.

Garry Kasparov, the former chess grand master who has emerged as one of the Kremlin’s most prominent critics, said the mere fact that the rally took place made it a success, given the efforts by authorities to stop it.

“We are protesting and it means that authorities are not as monolithic and powerful” as they believe, he said. “They are afraid that one day we will tell them ’enough.”’

The demonstrators chanted “Freedom” and held banners reading “No to Police State” and “Russia Without Putin.”

Since he took office in 2000, Putin has taken steady, gradual steps to centralize power and eliminate democratic checks and balances.

He has created an obedient parliament, abolished direct gubernatorial elections, tightened restrictions on rights groups and presided over the elimination of most opposition voices from the media, especially the television networks.