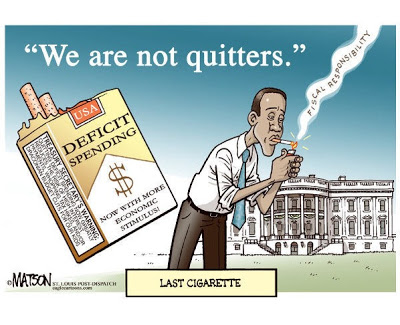 America’s Sea of Red Ink Was Years in the Making
By David Leonhardt / June 9, 2009

There are two basic truths about the enormous deficits that the federal government will run in the coming years.

The first is that President Obama’s agenda, ambitious as it may be, is responsible for only a sliver of the deficits, despite what many of his Republican critics are saying. The second is that Mr. Obama does not have a realistic plan for eliminating the deficit, despite what his advisers have suggested.

The New York Times analyzed Congressional Budget Office reports going back almost a decade, with the aim of understanding how the federal government came to be far deeper in debt than it has been since the years just after World War II. This debt will constrain the country’s choices for years and could end up doing serious economic damage if foreign lenders become unwilling to finance it.

Mr. Obama — responding to recent signs of skittishness among those lenders — met with 40 members of Congress at the White House on Tuesday and called for the re-enactment of pay-as-you-go rules, requiring Congress to pay for any new programs it passes.

The story of today’s deficits starts in January 2001, as President Bill Clinton was leaving office. The Congressional Budget Office estimated then that the government would run an average annual surplus of more than $800 billion a year from 2009 to 2012. Today, the government is expected to run a $1.2 trillion annual deficit in those years.

You can think of that roughly $2 trillion swing as coming from four broad categories: the business cycle, President George W. Bush’s policies, policies from the Bush years that are scheduled to expire but that Mr. Obama has chosen to extend, and new policies proposed by Mr. Obama.

The first category — the business cycle — accounts for 37 percent of the $2 trillion swing. It’s a reflection of the fact that both the 2001 recession and the current one reduced tax revenue, required more spending on safety-net programs and changed economists’ assumptions about how much in taxes the government would collect in future years.

About 33 percent of the swing stems from new legislation signed by Mr. Bush. That legislation, like his tax cuts and the Medicare prescription drug benefit, not only continue to cost the government but have also increased interest payments on the national debt.

Mr. Obama’s main contribution to the deficit is his extension of several Bush policies, like the Iraq war and tax cuts for households making less than $250,000. Such policies — together with the Wall Street bailout, which was signed by Mr. Bush and supported by Mr. Obama — account for 20 percent of the swing.

If the analysis is extended further into the future, well beyond 2012, the Obama agenda accounts for only a slightly higher share of the projected deficits.

How can that be? Some of his proposals, like a plan to put a price on carbon emissions, don’t cost the government any money. Others would be partly offset by proposed tax increases on the affluent and spending cuts. Congressional and White House aides agree that no large new programs, like an expansion of health insurance, are likely to pass unless they are paid for.

Alan Auerbach, an economist at the University of California, Berkeley, and an author of a widely cited study on the dangers of the current deficits, describes the situation like so: “Bush behaved incredibly irresponsibly for eight years. On the one hand, it might seem unfair for people to blame Obama for not fixing it. On the other hand, he’s not fixing it.”

When challenged about the deficit, Mr. Obama and his advisers generally start talking about health care. “There is no way you can put the nation on a sound fiscal course without wringing inefficiencies out of health care,” Peter Orszag, the White House budget director, told me.

Outside economists agree. The Medicare budget really is the linchpin of deficit reduction. But there are two problems with leaving the discussion there.

First, even if a health overhaul does pass, it may not include the tough measures needed to bring down spending. Ultimately, the only way to do so is to take money from doctors, drug makers and insurers, and it isn’t clear whether Mr. Obama and Congress have the stomach for that fight. So far, they have focused on ideas like preventive care that would do little to cut costs.

Second, even serious health care reform won’t be enough. Obama advisers acknowledge as much. They say that changes to the system would probably have a big effect on health spending starting in five or 10 years. The national debt, however, will grow dangerously large much sooner.

Mr. Orszag says the president is committed to a deficit equal to no more than 3 percent of gross domestic product within five to 10 years. The Congressional Budget Office projects a deficit of at least 4 percent for most of the next decade. Even that may turn out to be optimistic, since the government usually ends up spending more than it says it will. So Mr. Obama isn’t on course to meet his target.

But Congressional Republicans aren’t, either. Judd Gregg recently held up a chart on the Senate floor showing that Mr. Obama would increase the deficit — but failed to mention that much of the increase stemmed from extending Bush policies. In fact, unlike Mr. Obama, Republicans favor extending all the Bush tax cuts, which will send the deficit higher.

Republican leaders in the House, meanwhile, announced a plan last week to cut spending by $75 billion a year. But they made specific suggestions adding up to meager $5 billion. The remaining $70 billion was left vague. “The G.O.P. is not serious about cutting down spending,” the conservative Cato Institute concluded.

What, then, will happen?

“Things will get worse gradually,” Mr. Auerbach predicts, “unless they get worse quickly.” Either a solution will be put off, or foreign lenders, spooked by the rising debt, will send interest rates higher and create a crisis.

The solution, though, is no mystery. It will involve some combination of tax increases and spending cuts. And it won’t be limited to pay-as-you-go rules, tax increases on somebody else, or a crackdown on waste, fraud and abuse. Your taxes will probably go up, and some government programs you favor will become less generous.

That is the legacy of our trillion-dollar deficits. Erasing them will be one of the great political issues of the coming decade.

This entry was posted in RagBlog and tagged Congress, Economic Crisis, Obama Administration. Bookmark the permalink.