US "Superpower": Not Without Foreign Money 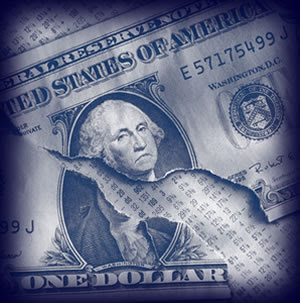 The US Senate has voted $165 billion to fund Bush’s wars of aggression against Afghanistan and Iraq through next spring.

The “world’s only superpower” is so broke it can’t even finance its own wars.

Each additional dollar that the irresponsible Bush Regime has to solicit from foreigners puts more downward pressure on the dollar’s value. During the eight wasted and extravagant years of the Bush Regime, the once mighty US dollar has lost about 60% of its value against the euro.

The dollar has lost even more of its value against gold and oil.

Before Bush began his wars of aggression, oil was $25 a barrel. Today it is $130 a barrel. Some of this rise may result from run-away speculation in the futures market. However, the main cause is the eroding value of the dollar. Oil is real, and unlike paper dollars is limited in supply. With US massive trade and budget deficits, the outpouring of dollar obligations mounts, thus driving down the value of the dollar.

Each time the dollar price of oil rises, the US trade deficit rises, requiring more foreign financing of US energy use. Bush has managed to drive the US oil import bill up from $106 billion in 2006 to approximately $500 billion 18 months later–every dollar of which has to be financed by foreigners.

Without foreign money, the US “superpower” cannot finance its imports or its government’s operation.

The rising price of energy drives up the price of producing and transporting all goods, but American incomes are not rising except for the extremely rich.

If oil was the reason Bush invaded Iraq, the plan obviously backfired. Oil not merely doubled or tripled in price but quintupled.

America’s political leaders either have no awareness that Bush’s wars are destroying our country’s economic position and permanently lowering the living standards of Americans or they do not care. McCain says he can win the war in Iraq in five more years and in the meantime “challenge” Russia and China. Hillary says she will “obliterate” Iran. Obama can’t make up his mind if he is for war or against it.

The Bush Regime’s inability to pay the bills it is piling up for Americans means that future US governments will cut promised benefits and further impoverish the people. Over a year ago The Nation reported that the Bush Regime is shedding veteran costs by attributing consequences of serious war wounds to “personality disorders” in order to deny soldiers promised benefits.

Previous presidents reduced promised Social Security benefits by taxing the benefits (a tax on a tax) and by rigging the cost of living adjustment to understate inflation. Future presidents will have to seize private pensions in order to make minimal Social Security payments.

Currently the desperate Bush Regime is trying to cut Medicaid health care for the poor and disabled.

The Republican Party is willing to fund war, but sees everything else as an extravagance. The neoconized war party is destroying the economic prospects of American citizens. Is “war abroad and poverty at home” the Republican campaign slogan for the November election?

Paul Craig Roberts wrote the Kemp-Roth bill and was assistant secretary of the Treasury in the Reagan administration. He was associate editor of the Wall Street Journal editorial page and contributing editor of National Review. He is author or co-author of eight books, including The Supply-Side Revolution (Harvard University Press). He has held numerous academic appointments, including the William E. Simon chair in political economy, Center for Strategic and International Studies, Georgetown University, and senior research fellow, Hoover Institution, Stanford University. He has contributed to numerous scholarly journals and testified before Congress on 30 occasions. He has been awarded the U.S. Treasury’s Meritorious Service Award and the French Legion of Honor. He was a reviewer for the Journal of Political Economy under editor Robert Mundell.

This entry was posted in RagBlog and tagged Economy, U.S. Government. Bookmark the permalink.

1 Response to US "Superpower": Not Without Foreign Money