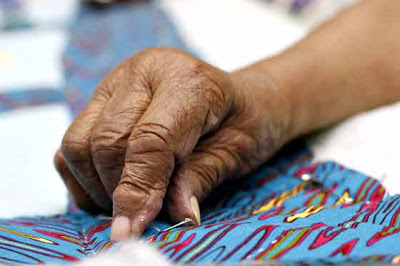 If you have had the misfortune to be exposed to University of Texas student journalism on a daily basis — as I was during my 17 years at UT — you probably learned to downsize your level of expectation. Day in, day out, Daily Texan editorials and Letters to the Editor — the editors and the readers — locked horns in spirited competition to achieve new depths of banality, and the university spends mega-bucks on a slick 48-page four-color magazine called burntORANGE in which to showcase student writers offering advice on “the best place to catch a nap on campus” or “how not to look like a freshman.”

Is this what Walter Cronkite means when he says about UT: “What starts here changes the world?”

Therefore it is an unexpected surprise to find that UT students are indeed capable of producing thoughtful, mature, and probing reporting and then packaging it in a compelling and highly readable format. Students of Mercedes Lynn de Uriarte’s Alternative Journalism (J349) class currently are putting the finishing touches on the second issue of InCite, an exceptional web publication researched, written, and produced by students.

Below the website’s masthead is a short mission statement stating: “InCite seeks to provide another dimension to news by exploring the complexities of events. To do so, InCite draws across perspective and upon intellectual diversity for contextualization while anchored within independent thought.”

The course syllabus further describes J349 as an “interdisciplinary survey course for graduate and undergraduate students” exploring “the journalistic, sociological and historical role of the alternative press.” Students are challenged to bring to the publication of InCite the same kind of intellectual diversity which drives the truth-seeking traditions of The Nation, In These Times, The Progressive, Mother Jones and other similar independent publications.

Obviously the concept of “intellectual diversity” is important here, and the work featured in the two issues of InCite so far produced indicates a maturity and depth of understanding that transcends various “diversities du jour” occupying so much discussion in academic and governmental circles these days.

In addition to The Rag Blog’s featuring of Priscilla Villareal’s extraordinary photo essay about a group of elderly East Austin quiltmakers, the current issue of InCite has Mary Tuma’s well-researched and sensitively written report of the social effect of a digital inequality separating gender, race, and class demographics in Austin; a timely piece by Jazmine Ulloa on how credit card companies prey on students; Gregory Brandt’s in-depth report on the May 2 Global Marijuana March in Austin; and DC Tedrow’s gripping narrative of Iraq and Afghan veterans reliving the horrors of war.

Both issues of InCite can be found here. 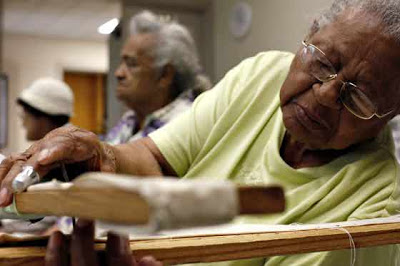 Friendship and caring were part and parcel of the quilting process for this circle of friends. Photo by Priscilla Villarreal / InCite.

The eight women who spend their Tuesdays and Thursdays at the Blackland Neighborhood Center enter full of purpose. One flips on the CD player that produces the familiar tunes of gospel artists Kirk Franklin and Chester D.T. Baldwin. Up goes the large quilting frame to hold the coverlet they work on together. Another relaxing session begins.

The Center at 2005 Salina Street in East Austin serves a number of community purposes. Neighborhood residents turn there for food, transportation services, employment information and even entertainment such as bingo.

But the quilters — Martha Coleman, Bessie Futrell, Willie Mercer, Carrie Henderson, Royce Pryor, Annie Watrous, Patsy Dearborn and Hazel Weathersby — are steady Center participants, ranging in age from 62 to 104, who have outgrown the back room space where they meet. They crowd into the room already jammed with boxes of fans, stacks of chairs, and filing cabinets. A full bookcase clings to one wall. Located next to the food pantry, the room also stores surplus food. The women can barely gather around the frame which is supported by two carpenter horses.

To ease the crush, volunteers are renovating the Stewart House, a nearby dwelling that will serve as a center annex. The quilters expect to move into it later this year. Carrie Henderson, one of the younger women says they don’t really want to go, but will if they must. She worried about handicap access to the “rescued” home. But Bo McCarver, organizer of the non-profit Blackland Neighborhood Group, said that the house will definitely be outfitted for use by the disabled. Neighborhood activites, he added, now need more space.

The women work steadily while workers stop by to chat or to tease.

“Oh is that the drunkards’ path?” asks Sandra Taylor Harris, an administrative assistant at the Center, while she sneaks a peek at Henderson’s sheet of patterns. “Yeah I know that pattern,” she jokes. Harris likes to tease them saying that the reason their quilts are completed so quickly is because she comes in after they’ve left and sews for them — like the shoemaker’s elves in the classic Grimm Brothers’ fairy tale.

She admires the quilters efforts. “You really have to have patience to do that, and these women have patience,” she says. 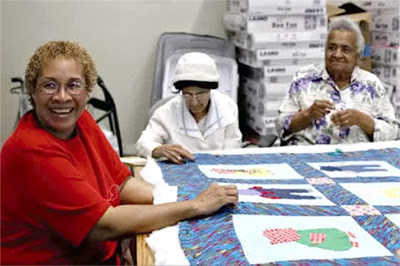 Binding the community: Austin’s Blackland Quilting Group at work (and play). Photo by Priscilla Villarreal.
At lunchtime, they share food from home. These women enjoy each other’s company, never running out of conversation or jokes. They know each other well — five are related either by blood or marriage.

Sometimes, concentration on the quilt brings periods of silence before they return to discussing current news, church events, family happenings, and even pop culture, like who was eliminated the night before from American Idol. When they begin to “roll” (folding the completed outer portions of the coverlet and working closer to the quilt’s middle ) laughter erupts if someone lets the frame fall.

These gatherings provide gratifying pastime and the comfort of community. Watrous, one of the newest members, says it’s the best thing that has happened to her, because everyone is so congenial. “It’s nice to have somewhere to go and to be around such pleasant people,” she says. Watrous is one of two in the group who is not related to any of the other members, but that does not mean she is an outsider. She says she has made pretty good friends and they “treat her like a relative.” Like Watrous, Weathersby says the other quilters have also “adopted” her into their family.

The ladies don’t sell their quilts, but give them to family members and old friends. Watrous gave one of the most recently completed works to a church friend.

The quilts also go to a select few organizations, like the George Washington Carver Museum, which once exhibited the ladies’ collection. The museum’s biannual exhibit, “By Bits and Pieces,” showcases African-American quilters. It displayed these women’s quilts from October to December 2006. Bernadette Phifer, Carver Museum curator, contacted them and collected their patchworks. Faith Weaver, former exhibit coordinator for the museum, says they chose them because “they demonstrated the functionality, creativity, and the ability to serve to record family history that quilts were in the black community.”

Weathersby, another newcomer to the group, says that quilts were used during the times of the Underground Railroad in coded ways that gave directions to those who fled. Henderson even made one on display at the museum that told the story of Railroad’s escape system.

Not only did the community enjoy seeing these coverlets, but Weaver believes the women got something else out of it. “It was an intimate celebration and self-appreciation of their work,” she says.

The exhibit also brought some unwanted commercial attention. “After the exhibit ended, people came by the Center and had lists of requests to make quilts and would ask how much,” says Pryor.

Bob Jones, the current exhibit coordinator for the Carver Museum, said they are thinking of displaying the ladies’ handiwork again next fall.

The women have set guidelines for quilt requests. The person who wants a quilt made must bring the top (pattern), batting (cotton filling), lining (bottom sheet of quilt), needles and thread. When that’s done, the effort becomes one of community building. They invite the petitioner to stay to help make the quilt — and then to agree to stay long enough to help others with theirs.

Five years ago, Center workers asked if they could display the quilts for Juneteenth. Since, they cheerfully drape their quilts around their workspaces.

Susie McDonald, Georgia Medlock, Rena Martin Leonard, and Henrietta Jackson were among the group’s organizers during the Civil Rights era. Martha Coleman, who turned 104 in July, is McDonald’s sister, and joined the group in 1971 after their mother passed away.

Once the Blackland Neighborhood Center opened in 1984, Pryor, Coleman, and two of her sisters joined the group. Henderson estimates that since 1971 they have steadily made two quilts per week, or almost 4,000 quilts total.

“Anyone is invited to come and sew with us,” said Royce, “it just happened that it’s the same ones that stick with us.”