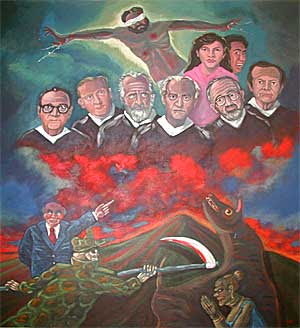 Mural at the University of Central America in San Salvador depicts martyred Jesuit priests and suggests complicity of the nation’s business and political leadership.

In El Salvador, six Jesuit priests are being honored twenty years after their murders by the U.S.-backed Salvadoran military. On Monday [November 16, 2009], the priests were bestowed the nation’s highest civilian award, marking the first time the Salvadoran government has honored the priests since their deaths. In a ceremony attended by the priests’ families, Salvadorian President Mauricio Funes said his country is “pulling] back a heavy veil of darkness and lies to let in the light of justice and truth.” — Democracy Now (see story below)

Twenty years later:
Remembering the ‘Tope’
A time of fear in El Salvador

I lived in El Salvador from August 1986 to September 1990. I worked on a Catholic parish team in a small town in the eastern part of the country, training village health promoters.

Our town in northern Usulatán was very isolated, literally the end of the road, with nothing beyond it but mountains and the unpatrolled border with Honduras. But in November 1989 we joined the whole country in the time of fear and danger called the “Tope” — the “final offensive” of the FMLN, the rebel guerrillas.

Most of the fighting was in the larger cities, with street fighting especially in San Salvador’s poor neighborhoods. The guerrillas expected that the population would rise up in support of their offensive, and that they would thus win the long civil war against the government. As it turned out, that didn’t happen in numbers sufficient to turn the tide, and the war continued for another two years.

We had little news, and being far from most of the action, were spared the worst of the struggle. We’d get some radio news, from the FMLN’s clandestine station, and occasionally from Voice of America or BBC. We knew about the simultaneous U.S. attack on Panama City as the army went in to arrest the then president, Manuel Noriega. But all the highways were shut down by a paro, a traffic blockade enforced by the guerrillas on a national level. And phone and electric lines were cut, too. There was no way to know what was happening to our friends in other places, nor to let them know how we were doing.

The offensive went on for many days. We could hear sporadic artillery in the next town over, but our town remained quiet, although government soldiers from a large garrison in town were out patrolling. We probably continued our visits to outlying villages 2-3 times a week since we went on foot anyway. But mainly we hunkered down and waited it out.

On the morning of Nov. 16, the news came that the six Jesuit priests and their housekeeper and her daughter had been found shot execution style at their house at University of Central America, the UCA. We struggled with fear since we also lived in a parish house, beside the church. Would more priests, nuns and lay workers be targeted? Would there be men who would come in the night for us?

During that time we had a young Salvadoran man from the capital working with us. He had been an active member of popular organizations in his poor neighborhood. He became filled with fear for his safety when the radio announced the death of a near relative in the fighting. He quickly decided to flee the country, and began the perilous trip by land to exile in the U.S. The last we heard, he was living as an undocumented worker in Los Angeles.

After over two weeks of fighting, things finally calmed down and the guerrillas went back to the hills. After the traffic blockade was lifted, we went into the capital to see how others in our program were doing, to call home and let people know we were ok.

Our friends had had to flee the house where our volunteers stayed since it was in the crossfire when people in the house next door began firing at soldiers in the streets. To find safety, they went to the Hilton where the international press stayed, and we shared the room there with four or five other volunteers for a few days. (The Hilton may not have been all that safe—one journalist found rifle shells pressed under his door, a not so subtle threat.)

On the TV there we watched CNN tell the story of our colleague who had been arrested by the Salvadoran police and charged with having weapons buried in her yard, which she denied. Senator Christopher Dodd and other from the U.S. intervened, and after more than a week, she was released from jail and deported. But as an aside to that story, then Undersecretary of State Elliot Abrams said, “Well, we know that some of the U.S. citizens who claim to be missionaries support the guerrillas.” I’ll never forget my outrage — I shouted at the TV, ”Why not just paint targets on our backs!”

After the fighting, the destruction and the killing, things settled back into an uneasy calm in the city. Soldiers and police patrolled the streets, arms at the ready. Cleanup began, and the last of the burials took place. Death threats and oppression of the opposition continued. There were sporadic battles in the rural area. In our town, the soldiers patrolled and noisily trained in the early mornings right outside the church. Everyone kept their heads down a little lower. The memorial chapel for the Jesuits was built and regular services were held there. Life, such as it is during a war, went on. 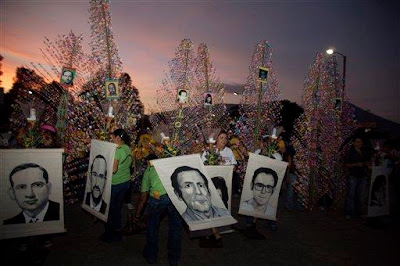 In El Salvador, six Jesuit priests are being honored twenty years after their murders by the US-backed Salvadoran military. On Monday, the priests were bestowed the nation’s highest civilian award, marking the first time the Salvadoran government has honored the priests since their deaths. In a ceremony attended by the priests’ families, Salvadorian President Mauricio Funes said his country is “pulling] back a heavy veil of darkness and lies to let in the light of justice and truth.” El Salvador’s defense minister also announced the military is ready to ask for forgiveness and open its archives to a long-sought investigation. The Jesuits had been outspoken advocates for the poor and critics of human rights abuses committed by the ARENA government. They were killed on November 16, 1989, when a military unit entered the Central American University campus and shot them to death. The priests’ housekeeper and her daughter were also killed in the attack. The current head of the university, Priest Jose Maria Tojeira, welcomed the posthumous recognition.

Many people from all parties—of course, ARENA, as well—said the priests were great men who helped to end war before, because their martyrdom pushed to accelerate peace talks. But never in twenty years has there been an official word of recognition for these people’s dignity. This is the first time, and I think it’s a very important symbol that should be opened to all victims from El Salvador.

The order to kill the priests is widely believed to have come from senior ARENA party and military leaders, but no high-ranking official has ever been charged

1 Response to Val Liveoak : Remembering the ‘Tope’ in El Salvador