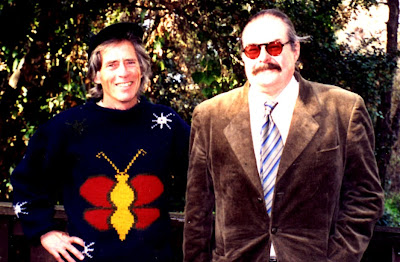 for Chuck Kinder and John Sinclair on their birthdays, October 2012

The voices beside your pillow, friends past midnight,
Wailing from the River, whistling through the Gaps,
Bring tales and tones so pure and sexual they lift you like a knife.
Their guitars and drums like Indians, slaves and Gospels freed,
Raise heroes from the outlaw, racing in the streets,
All they say truer than what’s on your parents’ new TV.

What is this America but promises
That those left out
May rise according to their worth?
What is it but best minds and hearts
In red jackets ripped apart?
What Wars and wars haunt Desks of Insurance agents?
What results are outright when the Road is open,
Fields are level, and choices abundant?
What more might happen to Motor Cities
After Bebop, Doowop, and John Coltrane chords–
Yes, chords from notes–
Joined with Highland melodies?
What more might you do with your pillows’ pain,
Hungry ears’ wound and bow?

John reached out to make Rock free as jazz.
John reached out to bring White into Black.
John reached out to smoke and drink and fuck
Upside-down or any other way he liked.
John risked his life for all he felt gave some light.
Chuck punched his way out of West Virginia parking-lots.
Chuck claimed seven Armed Robberies when age seventeen.
Chuck dove into Elizabethans, Matthew Arnold,
The Golden Bough, and McCluhan with the same drive.
Chuck brought friends West to share in edges’ glow.

Decades pass. Partners split and losses wrench.
Knives of Indians and Blacks show up outside bars.
Water Follies lap against corpses found in the Ocean.
Jimmy Carter, Ronald Reagan, a Bush and a Clinton
Are President. John and Chuck smoke and drink,
Teach, create, promote and inspire
More who listen and talk around their tables. They maintain
Forbidden radio.
They can be ignored but not stopped.
Their beards thin to catch light.

Bring on wine. Bring on Fats. Bring on Eric
And thousands welcome gamblers and clowns.
Bring on Jack, bring on herb.
Bring on Aunt Tee, bring on Aunt Bea. Bring on
Demons of basepaths and night-sweats. Bring on
Mardi Gras Black Indians’ gifts every year
Of brilliance sewn into design.
Bring on the giant night and whole works of sunsets over water.
The word–the thing, the thing we know,
Beyond our words, at last, that thing we heard
So ‘way back when, our out and light and balm,
That thing is Love.

Gods bless this merry company,
Share the love around.

Don Paul met Chuck Kinder when Don was the youngest winner of the Wallace Stegner Fellowship in Creative Writing at Stanford, 1971. He met John Sinclair in 1989 when they first performed together in Detroit. He moved to New Orleans in January 2006 to help with preserving a culture that lets Mardi Gras Indians flourish. Please go here for many albums and books. His performance at New Orleans’ Cafe Istanbul of a poem “for and from Bob Kaufman” is here.

Chuck Kinder is the author of four acclaimed novels, Snakehunter, The Silver Ghost, Honeymooners, and The Last Mountain Dancer. He taught for 30 years at the University of Pittsburgh and became a beloved advisor to dozens of students who kept writing fiction after taking his class. He performs with the Deliberate Strangers in Pennsylvania and West Virginia. Please go here.

John Sinclair is a poet, musicologist, and touring artist who has celebrated deep and lively alternatives for the Western world over more than 50 years. He was co-founder of the White Panther Party and the Ann Arbor Blues Festival and was manager of the MC-5. He was the subject of John Lennon’s song “Ten for Two.” He recently brought out an homage to John Coltrane as book and CD. Please go here for many links.