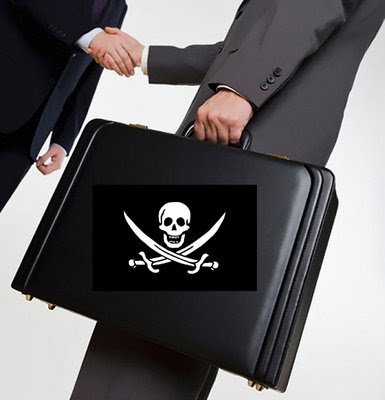 Of all the old pirates of story and song,
Blackbeard; and Bluebeard; John Silver, called “Long”;
each had his own favorite way to do wrong!

But the one thing that all of them liked very best
was opening a just-grabbed treasure chest,
right in front of an unwilling guest!

“Was these your fine jools, dear?” they’d pleasantly coo,
“and was these your doubloons? Well, that will not do!”
And they’d take for themselves everything nice or new.

But at least when they did this, they didn’t pretend
it was for your own good, but their larcenous ends,
upon which such thievery clearly depends!

Our modern day pirates are much more discreet,
with old school ties and nicely-shod feet,
and business arrangements so tidy and neat.

They’ve elected themselves to the highest posts,
bought men with money, or blackmailed their hosts;
poisoned the wells and turned us into ghosts.

There’s never a sign of a saber or gun,
just fine-printed contracts and thefts quietly done,
so smooth that the robbers do not even run!

Just the money, that’s all, runs away in the night
to foreign bank fortresses tucked out of sight,
in places where Empire still flexes its might.

The factories left, and all the real jobs
turned into vast slave ships, filled with poor slobs
who don’t even know how bad they’ve been robbed.

And we, poor blighters, left holding the bag,
empty as a promise, wrapped in a flag,
have little left over but a real stone drag!

Now they’ve passed a new law for our pirate lords:
we’re to empty our wallets or face down their swords,
in the form of new taxes and sugar-pill words.

Here’s a thought for the rascals that pillage and steal:
with our dignity may go our bleeding-heart zeal!
We may soon see you lashed to the old breaking wheel!

Let’s bring back the gallows, the rack, and the whip!
Catch these corporate pirates and let the cat rip!
Don’t pay the ransom, you’re just being clipped!