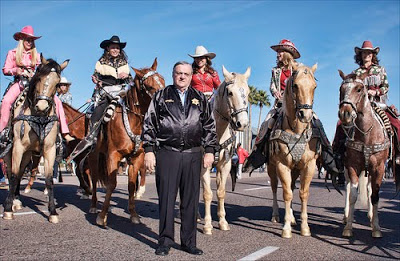 Cochise, son of the oak,
(Guchiish)
Arise
The desert cries for justice

(We must scalp Sheriff Joe)

Lt. Bascom hung your brother and nephews
Fed their eyes to the ravens
And their feet to the coyotes

Cochise of the lance
Call your blood, Mangus Colorado,
(Gandazislichiidn)
Tall as a mountain and unyielding

Johnson massacred 400 Apache women and children
So Mangus, in his grief,
made the white moon scream

Cochise, you craved peace,
But the invaders murdered your children
for gold, copper and real estate

(We must scalp Sheriff Joe)

Arizona is one of God’s great poems
But the pale mad ants
Want only to spill water, asphalt, and hate

Cochise, brother to the Black man,
You defeated the slave owners’ invasion at Dragoon Mountain
But Lincoln sent no congratulations

Cochise, Last Poet of free people,
You asked these questions:
“Why do the Apache carry their lives on their fingernails?
Why is it that the Apaches wait to die?”

“Why shut me up on a reservation?
We will make peace; we will keep it faithfully.
But let us go around free as Americans do.
Let us go wherever we please.”

The Secretary of War replied:

“My dear Cochise,
your aboriginal freedom is a disease
that we will cure with gallows,
howitzers, and cheap whiskey

If you complain about the reservation,
your starving cattle and sick children
We’ll exile you to a land without mountains
Where, like the Jews, you’ll weep for centuries.”

Still, the sky has exploded
And the locusts have eaten our dreams

Robespierre of the saguaro

Your pony is ready,
Painted for war,

The young girls have finished
Your medicine shirt

The people are chanting
And we must go

To take the scalp of Sheriff Joe Arpaio

[Mike Davis is a Distinguished Professor in the Department of Creative Writing at the University of California, Riverside. An urban theorist and a social activist, Davis is the author of City of Quartz: Excavating the Future in Los Angeles.]