Vets Speak Out About Wesley Clark and John McCain 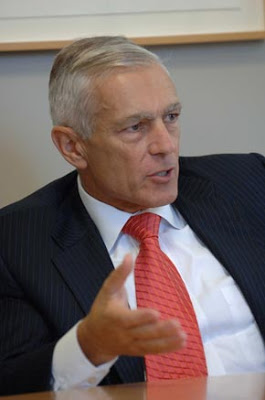 The treatment of Clark’s lucid remarks made in the last few days by the ever-rabid media has been absolute and complete. Anyone who reads a transcript of Clark’s remarks could not possibly come away with the conclusion that he was attacking Crazy Train’s military record.

Clark was merely stating what ought to be obvious to just about all of us. Having been shot down over Nam and imprisoned for several years does not qualify a man to be president. Personally I don’t think it qualifies him to be a hero but I won’t argue that point — that’s my own opinion.

Veterans are speaking out against the bullshit.

We’ve heard from the pundits, the “strategists,” and the politicians all day long on Wesley Clark’s recent comments.

That said, I’ve been terribly disappointed by the Democratic “strategists” who’ve fallen all over themselves in order to talk about how sacred military service is–specifically John McCain’s–and how awful General Wesley Clark’s comments were, even though not one “strategist” that I’ve listened to today has ever served a minute in uniform. These ignorant, knee-jerking consultants on TV have been in an apparent race to concede ultimate authority on military matters to John McCain and the Republican Party since Sunday night. It’s disgusting. And these concessions have been so over-the-top destructive to our long-term plans for running the country, that I’m not even sure where to begin.

The bottom line is this: If Democrats tuck tail and run from Republicans in this instance, we run the risk of ceding authority on military issues to John McCain for the rest of the campaign. Whether you like Clark or not, everyone has an interest in defending him vigorously in this case. We cannot allow the Right and the media to get away with trashing the first guy to come out in prime time to slam McCain’s military “expertise.” If our organizations don’t defend Clark as being right in this case, we give in to the idea that Republicans are the parents in terms of national defense, and Democrats are the children–something those on the Right will be more than happy to reinforce.

This idea that we can’t question someone’s expertise on military matters simply because they served could very easily become the next “whoever is against the war is unpatriotic” mantra. And that’s not something I’m prepared to accept.

That said, one group we really haven’t heard much from today is the group that’s actually served in Iraq and Afghanistan. But that changes now.

Here are a handful of the messages we’ve received at VoteVets.org since this morning. Judge for yourselves what the troops who are left-of-center think about this whole deal.

General Clark was right. Service as Commander-in-Chief of the Armed Forces is only one of the roles of a president. General Clark did not attack Senator McCain’s ability to be president, he simply pointed out that his military service does not inherently qualify him for that role.

General Clark is right. We should honor the service of any veteran who has suffered in war, but I don’t think that in itself qualifies one to be the Commander-in-Chief. And that’s the point General Clark was making. He wasn’t attacking Senator McCain personally, and anyone who says otherwise is being disingenuous.

General Clark is on point in his comments about Senator McCain. There are many fine leaders in the military. Some–like Senator McCain–have persevered through the most terrible of circumstances. They are all heroes, but they do not necessarily possess the skills to lead the free world. If Senator McCain really wants to show his Commander-in-Chief credentials, perhaps he should start advocating for a sound national security strategy, rather than marching in the proverbial formation of eight years of failed Bush administration policy.

Combat veterans understand that General Clark did not denigrate Senator McCain’s honorable service to this nation. In fact, it’s Senator McCain’s lack of support for the troops–like his opposition to the new GI Bill until recently–which dishonors and dismisses the selfless sacrifices made by our brave men and women in uniform. General Clark understands these things and is never hesitant to speak out about them. General Clark has our back and I have his.

General Clark’s criticism is accurate and well-founded. No one is disputing the fact that Senator McCain served his nation with honor, and I am forever grateful for his sacrifice. That being said, the question at hand is whether the senator’s military service alone qualifies him to serve as Commander-in-Chief. Despite Senator McCain’s horrific experiences in Vietnam, during his tenure in the Senate, he has been a staunch advocate of the disastrous war in Iraq and the Bush administration’s failed foreign policy. Senator McCain did not support the Webb-Hagel G.I. Bill or the dwell-time amendment, either of which would have reduced some measure of the emotional and financial stress on active duty service members and veterans. General Clark was not attacking John McCain’s military service–he was questioning whether he learned anything from that experience.

In no way has General Clark questioned the honorable service or the patriotism of Captain McCain. Rather, he questioned the judgment of Senator McCain who has foolishly endorsed the failed neo-conservative foreign policy of the Bush administration.

General Clark needs to be making these comments. Its the only way to get through the free pass the media is giving John McCain because of his honorable service as a POW.

General Clark and John McCain are both equally honorable patriots. However, if we can’t have an honest and open debate about policy and military experiences, then the significance of this campaign will be greatly diminished. This is something on which John McCain has based his entire campaign and, therefore, General Clark was totally justified in pointing it out.

As a third-generation Army veteran, I’ve been fortunate to know many admirable men and women with service in the Armed Forces, but I’m also rational enough to understand that military service alone is not a qualification to be President of the United States . Having the foresight to avoid unnecessary wars and the compassion to fund health care and education for returning veterans is also essential; unfortunately, Senator McCain seems to focus solely on sending troops to war while ignoring other problems facing our nation. With American jobs going overseas, home values plummeting, and our nation’s educational and health care programs under-funded, we need a national strategy focused on resolving our problems both home and abroad. While John McCain’s Veteran and POW status makes him a hero to me and many others, his background in no way qualifies him to tackle the challenges facing our country.

To attack General Clark for stating what should be obvious — that military service alone does not automatically qualify one to be Commander in Chief or President — is ridiculous. Some of our most successful presidents have not served in the armed forces. President Bush did fly a plane in the military — and his record as Commander-in-Chief has been disastrous. While everyone should respect the service and sacrifice of John McCain (which General Clark did), this respect must not be a gag on honest questions or open debate.

General Clark’s comments were taken completely out of context by the media. He never questioned McCain’s service to the nation. He only repeated the words of the reporter asking the questions. General Clark is one of the most qualified voices in the debate over U.S. foreign policy, and it would be a huge loss for the pro-military crowd if his voice were silenced over this nonsense.

General Clark is right. Gen. Clark has seen combat as a company commander in Vietnam as well as the commanding General in Kosovo. If anyone knows that military service alone does not qualify one to be the President of the United States, General Clark is it.

My fiance and I both served with the 1st Brigade Combat Team, 101st Airborne Division (Air Assault). He was infantry and served two tours in Iraq, I was a public affairs specialist (journalist, photographer). Like many, we both saw a lot of death and destruction. As a result, we are both strong opponents of Senator John McCain, as are many of our fellow veterans. We were so relieved to see General Clark say publicly what so many of us who served in uniform have been thinking. Not only do we fundamentally oppose Senator McCain’s view on the war, but we are appalled by his constant commitment to voting against, or abstaining from voting, bills that would improve the welfare of service members and veterans.

No one disputes that Senator McCain served honorably in the Navy and is to be commended for his actions. He is truly an American war hero. But these events occurred 40 years ago and the circumstances under which he served in Vietnam (both in the country and under military regulations) are very different from those faced by service members serving in Iraq and Afghanistan today. Americans should be looking at his current record–and not lingering on his past one to see just how much he understands about this war and how committed he is to this country’s troops.

General Wesley Clark is the leader of veterans in the progressive movement. As such, he will defend himself and other, like-minded veterans will defend him–publicly. All parties interested in having the support of the military support should take note.