Victory for Free Speech at University of Texas 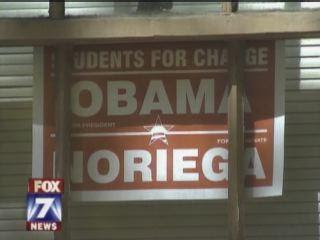 AUSTIN — Facing a free-speech uproar, the University of Texas backed down Thursday from punishing two students who refused to remove political signs from their dormitory window.

Connor Kincaid and his cousin and roommate, Blake Kincaid, said they were barred from registering for spring classes after refusing Wednesday to take down their signs supporting Democratic presidential candidate Barack Obama.

“Effective immediately, I am suspending the prohibition on signs in individual students’ residence hall room windows and any sanctions related to its enforcement,” UT President Bill Powers said in a written statement.

Powers said he had formed a committee to study the policy and make recommendations. In the meantime, he said, school policy now “expressly allows the display of signs and posters in students’ residence hall room windows.”

The Kincaid cousins were told during an administrative hearing Wednesday to take down their signs supporting Obama.

“This is an important free speech issue,” said Connor Kincaid, a 20-year-old junior who claimed during the hearing that he saw a sign supporting Republican candidate John McCain in the window of another dorm.

The university says the dispute had nothing to do with either candidate. UT has had a policy for more than 10 years forbidding the posting of signs in dorm windows in order to control the look of the campus and avoid the appearance that the university is supporting any candidate, said Jeff Graves, an associate vice president for UT legal affairs.

The crackdown sparked an outcry among students, and university Democrats and Republicans worked together to fight rules they said were unconstitutional. They had encouraged students across campus to put signs in their dorm windows as a form of protest.

Graves said he wasn’t aware of a prior case of a student facing an administrative hearing over the policy.

“It’s never been an issue,” he said. “Obviously this is a hot political issue, and it got pushed this time.”

UT officials believe the policy was constitutional as written but thought it made sense to allow signs to be posted inside the windows of individual living quarters, Graves said.

This entry was posted in RagBlog and tagged Austin, Freedom of Speech, UT-Austin. Bookmark the permalink.

1 Response to Victory for Free Speech at University of Texas