Vince Bell : The Life and Times of a Texas Songwriter 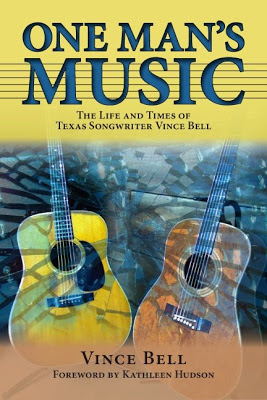 This is a fine book about Texas music, the singer-songwriter tradition, and a personal journey that ends triumphant in the here and now.

See ‘From Euphoria to Tragedy and Back’ by Michael Corcoran and ‘The Making of My Music’ by Vince Bell, Below.

Vince Bell has been a stalwart of the Texas singer-songwriter scene since he emerged in Houston in the early 1980s. He was a rising star in Houston and in Austin until he was almost killed in a car wreck in 1983. A severe head injury effectively wiped out his career. For awhile.

His determined rehabilitation and subsequent comeback have culminated in a trifecta this year: an album, a one-man play, and a wonderful book titled One Man’s Music, that tells the tale. Head injuries are difficult to diagnose and even more difficult to overcome, which Vince relates well in his telling. We see progress from the outside; he sees it from the inside looking out. Either way, his recovery alone makes for an inspiring story.

But it’s the details along the way that make this such a good read, capturing the vibe of the Old Quarter and Anderson Fair in Houston through anecdotes such as his wild night opening for Townes Van Zandt and recalling his last recording session before his car wreck in which Stevie Ray Vaughan, Eric Johnson and Chris Holzhaus added their guitars. Tim Leatherwood, Mandy Mercier, Kathleen Hudson and a cast of great pickers and poets all make cameos.

This is a fine book about Texas music, the singer-songwriter tradition, and a personal journey that ends triumphant in the here and now. I’m proud to know Vince as both a friend and a fellow traveler. 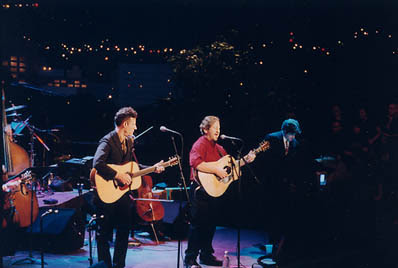 From Euphoria to Tragedy and Back

Singer-songwriter Vince Bell knows how suddenly euphoria can turn to tragedy. In December 1982, a 31-year-old Bell had just driven away from a South Austin recording studio where Stevie Ray Vaughan and Eric Johnson traded licks on what was supposed to be Bell’s debut album. Then his car was blindsided on Riverside Drive by a joyriding teenager.

Thrown 60 feet from the car and found face down in a pool of gasoline, Bell suffered a several injuries, including severe brain trauma that forced him to relearn how to make music.

His debut LP, called “Phoenix” of course, finally came out in 1994.

This incredibly sad and moving story can be found in “One Man’s Music” (University of North Texas Press), a new autobiography that is as much about the life of a songwriter as it is a tale of rebirth. This reads real, as Bell shows the fairytale the door with a life of alcohol, depression, poverty and, worst of all, creative self-doubts. In the vibrant 1970s Houston singer-songwriter scene, whose graduates include Townes Van Zandt, Guy Clark, Lucinda Williams, Nanci Griffith, Steve Earle and many more, Bell was the one who seemed most like a writer who played the guitar. It’s a little showoffy, but Bell spends the first few chapters proving to be a gifted, often funny storyteller, with a rare knack for descriptions (“they were so suburban they glowed”).

The reader gets a sense of the energy of the era when musicians inspired each other to show up next week with a song that would blow everyone away. One distraction of the book is that, after the accident, Bell switches from first person to interviews and then back to him. Considering that Bell forgot so much and had memory problems for years, it was probably a necessity to quote witnesses to fill the holes. But everything was going so well from just Bell’s point of view.

The book will make you curious about this man’s music, so there’s a companion CD of the same name, consisting of re-recorded Bell faves, as well as three new songs. Here’s more about the record.

The Making of My Music

I drove 4,000 miles of wasteland back and forth from New Mexico to California. Twice. For the privilege, I spent four nights in a motel on interstate 40 in Arizona somewhere between Kingman, and Winslow. The closest I got to the beach in Santa Monica, for two weeks, was a booth at Denny’s on Lincoln Boulevard. I survived a 13-car accident in a dust storm in the Mojave desert, with 7 semi-tractor trailers, that killed 4 people, 20 miles east of Barstow, California.

This lucky little album is a collection of my best. These are the songs included in my book and the one-man play. Eleven are songs previously recorded on all my previous albums. There are three new compositions.

I knew if I was going to release previously recorded material it needed to be with a novel arrangement unlike any I had offered before. A duet was a challenge. After pursuing the pianist in Los Angeles for the better part of a year, I recorded the work “so live” in 18 hours with Ned Albright, a recommendation of my first producer, Bob Neuwirth.