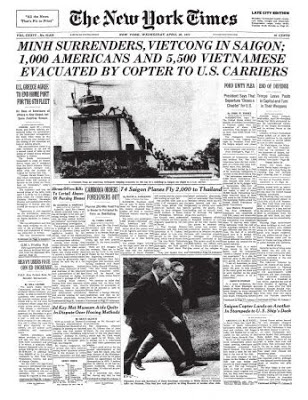 It was the military’s manipulative misreporting in Vietnam that fueled Lyndon Johnson’s 1965 disastrous escalation.

Here, the Declaration of Independence scorned King George III for elevating his army over our colonial legislatures. The founders opposed a standing army. Our first Commander George Washington warned against military entanglements. So did Dwight Eisenhower nearly two centuries later. These “quaint” monuments to civilian rule form the core of our constitutional culture.

So when the Pentagon wants to trash inconvenient opposition and escalate yet another war, it seeks subtler means. For example: the “virtual coup” now being staged in league with the New York Times, aimed at plunging us catastrophically deeper into Afghanistan.

It’s how they drove us into the abyss in Vietnam and Iraq. It demands we decide who will rule — the Pentagon, or the public.

It was the military’s manipulative misreporting in Vietnam that fueled Lyndon Johnson’s 1965 disastrous escalation. With the much-medalled William Westmoreland front and center, the Pentagon concocted a non-existent attack in the Gulf of Tonkin, warned that a communist victory would bring on the Apocalypse, told LBJ he could win, and ran its occupation army up to 550,000 troops.

When its last advisors fled in shame off that Saigon rooftop, the Pentagon blamed those who had opposed the war from the start. It assaulted the heroic independent reporters who exposed the war’s true horrors. It even attacked the corporate media that had been its willing partner in the war’s creation.

To its credit, the Times broke from its early support, making welcome history by publishing the Pentagon Papers, among much else. As today, it published opposing views all the way through.

But its big guns enlisted again in Iraq. The Bush Administration needed no convincing, but the American public did. Led by warhawk cheerleaders Thomas Friedman and Judith Miller, the Journal of Record sold a war based on Weapons of Mass Destruction and Dick Cheney’s “grateful” Iraqi citizenry, both of which were non-existent.

Today central casting has brought us Stanley McChrystal to rerun the role of Westmoreland/Cheney. Now the hero of an endless stream of hauntingly familiar puff pieces, the General’s carefully leaked “secret” demand for “a bare minimum” of 40,000 more troops to avoid “mission failure” has become the ultimate blackmail note, the core of a virtual coup in the making.

It comes as the Times concocts a report on “frustrations and anxiety [that] are on the rise within the military.” Among “active duty and retired senior officers” there is “concern that the president is moving too slowly, is revisiting a war strategy he announced in March and is unduly influenced by political advisers in the Situation Room.”

“Unduly influenced by political advisers?” Does this mean that for the Commander in Chief, elected by the people of the United States, advice is duly acceptable only from hawks in uniform?

Joining Tom Friedman (again!) is the Times’s Roger Cohen, who says Obama needs “endurance” because if we lose in “Afghanistan, Pakistan and Pashtunistan” there “would be a disaster for Western security.”

Sub in “Vietnam, Cambodia and Laos” and you can be reminded that our military is again backing a cabal of world-class heroin dealers.

And would the “loss” of AfPak, whatever that means, be a greater “disaster for Western security” than another trillion dollars diverted from education, health care, the environment, and domestic employment in a nation in deep financial chaos?

McChrystal is certainly entitled to his First Amendment rights. But so far, the American public is not buying. Polls show the country deeply divided, with slight majorities opposed to McChrystal’s demand for more troops. That means, there is nothing like the public consensus that should be required for any military excursion.

The key may be the money. In the booming sixties, we could “afford” to blow $100 billion or more on a futile, senseless war merely by bankrupting our health care system, blowing college tuitions through the roof, sacking our infrastructure, failing to upgrade our grid and power systems, debasing our currency, falling from an exporting powerhouse to an import addict, and much more.

The Pentagon’s gratuitous squander of another trillion in Iraq has helped squeeze the last of that “fat” out of our economy. A U.S. far beyond the brink of bankruptcy is being told to “stay the course” in the Graveyard of Great Powers, a country the size of Texas, a deathtrap to every invader for the past 2,300 years, including the Soviet Union. Pakistan is about twice the size of California. AfPak together have more than 200,000,000 people, more than 2/3 the population of the U.S.

Official military reports say there are about 100 members of Al Qaeda in Afghanistan. Despite the global nature of terrorism we are allegedly there to stamp out, no other nation seems compelled to join us there in any meaningful way.

Obama was elected in large part because the American public has sensed that — unlike his predecessor or opponent — he is intelligent enough to grasp all this. He ran promising a full commitment in Afghanistan. Now he has dared to take his time making a final decision. But will he have the courage to stand against the brass at crunch time?

Robert Gates, the Bush holdover at Defense, who won’t set a timetable for withdrawal, has gone public with his demand for more troops. As Yale’s David Bromwich puts it, the brass at The Times wants “a large escalation in Afghanistan. The paper has been made nervous by signs that the president may not make the big push for a bigger war; and they are showing what the rest of his time in office will be like if he does not cooperate.”

In other words, the virtual tanks have again surrounded the White House.

We cannot let them win. Another bloody, trillion-dollar Lone Ranger fiasco will definitively end any hope for health care, employment, education, the environment, a decent life for our children.

As usual, the Pentagon will be enriched and empowered. We will be impoverished and disenfranchised. Isn’t that what coups are all about?

So when the military and its minions demand we defer to their “experts,” we might recall the Cuban Missile Crisis. At its most terrifying peak, President John Kennedy — himself genuine war hero — polled the Joint Chiefs on how to respond to Soviet warheads in the western hemisphere. The generals unanimously demanded a nuclear attack. Thankfully, the president and his brother, the Attorney General, stood their ground.

Obama must now do the same. There are nuances in all global conflicts. But in an electronic age, when perception means virtually everything, the question is not just what happens in Afghanistan.

It is who rules here at home — the Pentagon, or the public.

[Harvey Wasserman’s History of the U.S. is at harveywasserman.com, along with Solartopia! Our Green-Powered Earth.]

20 Responses to Virtual Coup : Times, Pentagon Returning us to Vietnam?