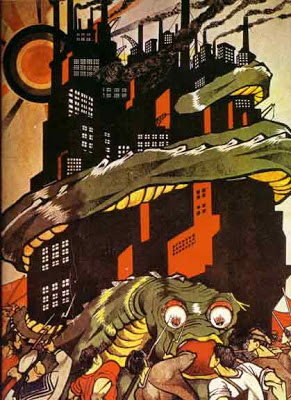 Propping up Capitalism…
‘A hundred billion in federal guarantees here, a trillion there, it all adds up.’
By Roger Baker / The Rag Blog / October 7, 2008

Don’t focus on the Dow too much. More important is probably how Bernanke is reacting, how panicky, whom he is bailing out, etc.

Here are two snips that tell the tale. There is a global financial crash going on as the first snip shows, and the US credit and money market has locked up. In response, the Paulson Bernanke team pledges to buy up any and all bad paper in certain categories like the collateral backing interbank loans, now US taxpayer guaranteed. A hundred billion in federal guarantees here, a trillion there, it all adds up. And all that fresh new money generated from bad paper will land somewhere sooner or later, and start looking for stuff to buy like fuel and food that may not be there. And you know where that leads. But it has to be done.

Using taxpayer money to prop up capitalism is no easy task. When it has to be done by means of the guaranteed tax obligations of a citizen population already deep in debt, the task is doubly challenging. It obviously is going to take some highly creative bookkeeping, for which job only a very few who occupy top positions in the Bush Administration are properly qualified.

When the White House brought out its $700 billion rescue plan two weeks ago, its sheer size was meant to soothe the global financial system, restoring trust and confidence. Three days after the plan was approved, it looks like a pebble tossed into a churning sea…

The Federal Reserve will create a special fund to purchase U.S. commercial paper after the credit crunch threatened
to cut off a key source of funding for corporations.

The Treasury will make a deposit with the Fed’s New York district bank to help set up the special purpose vehicle. The central bank will also lend to the program at policy makers’ target rate for overnight loans between banks. The Fed Board invoked emergency powers to set up the unit, the central bank said in a statement released in Washington.

Today’s action follows a slide in the commercial-paper market to a three-year low of $1.6 trillion last week as investors fled even companies with few links to the subprime mortgage crisis. Companies from newspaper firm Gannett Co. to electricity producer Southern Co. have been forced to tap credit lines or forego raising debt because of the market’s disruption.

The Fed didn’t say how much commercial paper, which hundreds of companies use to finance payrolls and meet other cash needs, it plans to purchase…