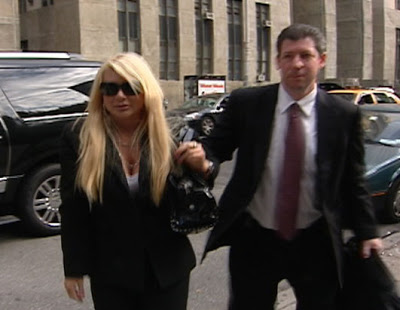 Shown here at a court appearance last fall, Kristin Davis pleaded guilty to charges of running a prostitution business that used more than 100 women. In an ABC interview Feb. 6, 2009, she tells how Wall Street CEO’s paid her with corporate credit cards. Photo from ABC.

Wall street lawyers, investment bankers, CEOs and media executives often used corporate credit cards to pay for $2,000 an hour prostitutes, according to the madam who ran one of New York’s biggest and most expensive escort services until it was busted last year.

But prosecutors in the Manhattan District Attorney’s office chose not to pursue any of the corporate titans, says Kristin Davis, who pleaded guilty last year to charges of running a prostitution business that used more than a hundred women.

“They showed no interest,” said Davis in an interview for broadcast Friday on the ABC News program 20/20.

A spokesperson said district attorney Robert Morgenthau had “no comment” on the handling of Davis’ case or her allegations.

Davis provided ABC News with a print-out of her computerized client list, the same one she says that was offered to the district attorney.

Among the names ABC News was able to confirm on the list: 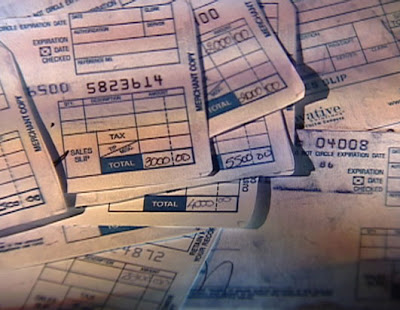 Credit card receipts Kristin Davis collected from her list of about 9,800 clients, many of whom spent hundreds of thousands of dollars a year to have sex with prostitutes. Photo from ABC.
A spokesman for JP Morgan said the company is looking into the matter.

Some of the men contacted by ABC News denied they used their corporate cards, and ABC News could not independently confirm if the credit card numbers listed were corporate accounts.

Davis says one CEO ordered her to send him invoices for “roof repair on a warehouse” to disguise the payment for prostitutes from corporate funds.

“That is fraud,” said former New York prosecutor Sid Baumgarten, who told 20/20 the district attorney should have investigated the men.

“Not necessarily just for the patronizing but for the use of these business records and credit cards to see what kind of fraud or tax fraud was being used. And if so, that is a major offense,” Baumgarten said.

When ABC News contacted that CEO, he said he used his corporate card to pay for the escort service to entertain clients, but that there was no sex involved.

Brought Down After Revelation of Client #9

Davis operated her escort service as a prostitution conglomerate, with five different “brands” over a four year period, each with its own “price point” and websites.

At the high end was an escort service called Carlyle Trust, mimicking the name, but not connected in any way, to a prestigious investment firm. Davis said she recruited top fashion models who charged up to $2,000 an hour for clients of Carlyle Trust.

Her lower cost services charged $400 an hour for a “body rub,” she said.

The “best little whorehouse on Wall Street” was located just a few blocks from the New York Stock Exchange, in apartment 3A at 136 William Street.

Davis operated three other “in-call” locations in the mid-town area of Manhattan.

But it came to a screeching halt last year in the crackdown that followed the revelation that then-New York Governor Eliot Spitzer was client #9 of a rival escort service.

In a book to be released Feb. 6, “Manhattan Madam,” Davis claims Spitzer had earlier been a client of her service but was banned because of his aggressive behavior trying to get girls to have unprotected sex with him.

Manhattan psychotherapist Jonathan Alpert, who works with many Wall Street clients, told ABC News that many of his clients who patronize escort services are accustomed to high risks and high stakes on the job, and seeing a prostitute, especially if one is married, provides the same rush. “You’re playing with fire…it’s part of the culture of Wall Street. A lot of drugs, cocaine use, fast times, sex–it’s part of the culture.”

Alpert said people also use adult sexual service as a way to cope with stress in much the same way that one may use alcohol or drugs. “It’s a way to escape,” said Alpert, adding that “A lot of clients I see tell me they simply want someone to speak to, someone to listen to them.”

In a plea arrangement, Davis pleaded guilty to promoting prostitution and was sentenced to three-months time served. She forfeited about $500,000 in profits as part of the deal, according to court documents.

“I, as the proprietor of a business get arrested and lose everything, when no one that was frequenting my business, spending $200,000, $300,000 a year, has been punished in any way or even looked into.”

Patricia Pileggi, a defense attorney who has represented a Madam, said that targeting the Madam and not the clients does nothing to deter prostitution.

“The DA’s office has some ability to prosecute the clients,” said Pileggi. “If there’s a real interest in deterring this kind of conduct you don’t simply target the Madam, you make an effort to target the clients as well.”

Pileggi added that there is a provision for the different degrees of culpability in the NY statutes: “[Davis] was prosecuted for a felony and the clients would be guilty of misdemeanors.”

She says she has not yet decided whether to release the full client list to the public.

[Kate McCarthy and Andrew Sullivan contributed to this report.]

This entry was posted in RagBlog and tagged Corporate Corruption, Prostitution, Wall Street. Bookmark the permalink.